An assessment of association between carbonated drinks consumption and dental caries prevalence: A cross-sectional study 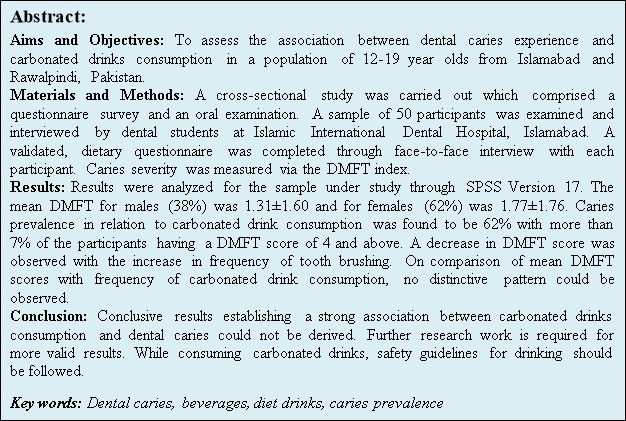 Dental caries may be defined as “a bacterial disease of the hard tissues of the teeth characterized by demineralization of the inorganic and destruction of the organic substance of tooth”.(1) It is the most prevalent oral disease worldwide.(2) It is a multi-factorial disease caused by the interaction of three principal factors; a susceptible host tissue, cariogenic micro flora and diet.(3, 4) Diet especially refined sugars, is an important etiological factor of dental caries. Both the frequency and the total amount of refined sugars consumed play a significant part in the etiology of caries. “The evidence establishing sugars as an etiological factor in dental caries is overwhelming”.(5)

Sugars are mostly contained in manufactured food and beverages and form an essential component of human diet.(6) Most carbonated beverages contain up to 10 tea-spoons of sugar per 12 oz. as opposed to 1-2 tea-spoons in fruit juices.(4, 7) Despite the differences in carbohydrate content, both seem to have similar cariogenic potential.(8) In addition to the high amounts of sugar, carbonated beverages also contain phosphoric, citric and carbonic acids which show a deleterious effect on enamel.(9, 10) Caffeine, which makes up a considerable portion of carbonated beverages, is a mildly stimulant drug and it may contribute to the tendency for frequent consumption of such beverages. All the aforementioned factors are responsible towards the rapid initiation and progression of caries.(11)

The Aim of this Cross-sectional study was to assess the association between prevalence of dental caries and carbonated drink consumption in a population of 12 to 19 years old children from Islamabad and Rawalpindi.

A questionnaire-based cross-sectional study was conducted at the Islamic International Dental Hospital, Islamabad during the month of June. The study comprised a questionnaire survey followed by a visual oral examination.

Sample: The participants comprised a convenience sample of 12-19 years old adolescents who were visiting the hospital at any time during 16th to 20th June. 1st year BDS students who fell in the above mentioned age bracket were also included in the sample. The participants were mostly residents of Islamabad and Rawalpindi. Sample size was chosen to be 50. Verbal consent was obtained from each participant and his/her guardian beforehand.

Questionnaire: A questionnaire was completed through a face-to-face interview with each participant which helped in achieving a 100% response rate.

The Questionnaire consisted of three sections.

Section A dealt with the oral hygiene habits and the beverage consumption habits of participants. In Question 1, the frequency of intake of different beverages was recorded by using a scale of 5 values; Never, Rarely, Once a week, 1 glass daily and 2 or more glasses daily. In the next set of questions, the participants were asked about (Q2) their preferred time of drink consumption (at mealtimes or between meals); (Q3) their preference of either regular or diet drinks and (Q4) the use of straw. Questions 5-7 assessed their oral hygiene knowledge.

Section B dealt with the socio-demographic details and section C recorded the DMFT score of each participant.

Clinical Examination: After the interview, each participant was orally examined by a 2nd year BDS student. The examination took place under a tube-light with the participant seated in a normal chair. No mouth mirror or CPI probe was used to assist in the diagnosis of caries. Only a tongue depressor was utilized by the examiner. The severity of caries was assessed via the DMFT index. A tooth was considered decayed (D) if a carious lesion was visibly appreciated; missing (M) if extracted due to caries and filled (F) if a restoration was seen. A restored tooth with recurrent decay was also counted as (D).(13)

Data Analysis: Statistical Package for Social Sciences (SPSS) Version 17.0 was used to enter, organize and analyze the data. The effect of different variables; frequency and time of consumption of drinks, demographic factors and oral hygiene habits on the DMFT scores of participants was analyzed by deriving frequencies, means and standard deviations.

Table 1 displays the number and percentages of participants in relation to beverage consumption and their sociodemographic details. In terms of daily consumption, milk and juices were the most popular drinks (n=35, 70%), while carbonated drinks were consumed by only 17 (34%) participants on a daily basis. In the younger age group of 12-14 years, 93% (n=14) preferred carbonated beverages whereas, coffee and juices were the main preferences of the other two groups (15-17 years, 18-19 years) being consumed by 100% (n=14) and 95% (n=20) of the participants respectively.

Table 1: Frequency distribution of different types of drinks as per consumption frequency and sociodemographic factors. (n=number)

Table 2: Prevalence and severity of dental caries in relation to consumption of different beverages. (n= total number of consumers of a particular drink. Percentage frequencies are given in brackets)

Table 3 shows the effect of different variables on DMFT score including time of consumption of carbonated drinks, use of straw, drink type, oral hygiene habits and demographic details. Around 56% (n=28) of participants reported consuming carbonated drinks at mealtimes. However, their DMFT score was unexpectedly higher than those who consumed their carbonated drinks between meals (36%, n=18).

Frequency of brushing showed a significant effect on the DMFT score by decreasing it with each increase in frequency. In terms of gender, mean DMFT score of females was higher (1.77±1.76) than that of males (1.31±1.60). Among the three age-groups, the 15-17 year age group showed a slightly higher caries experience than the other two groups. 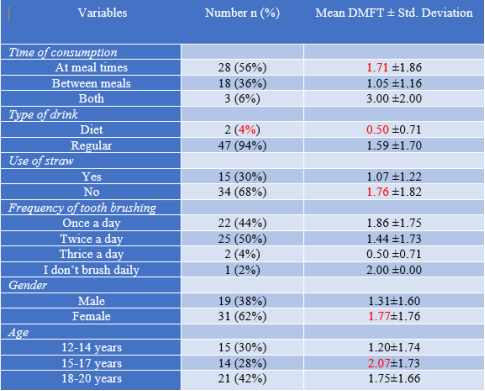 Table 4: Distribution frequencies of Decayed (D), Missing (M) and Filled (F) components in the whole sample as well as of the cumulative DMFT. 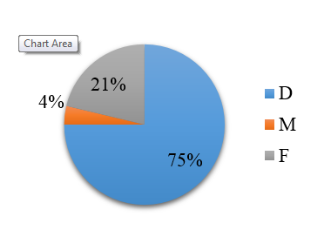 Figure 1: Distribution of each component of DMFT in the sample. 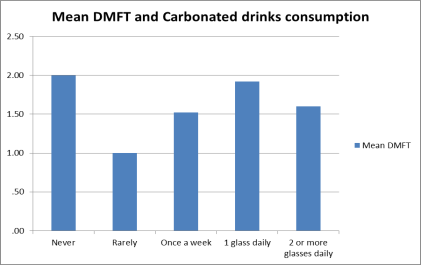 A strong association between carbonated beverages and dental caries has been indicated by many previous studies (11, 14-16) while a few indicate a much weaker association.(17, 18) We assessed this hypothesis by conducting a cross-sectional study in a sample of 50 participants from Islamabad and Rawalpindi. The results from our study found no association between carbonated drink consumption and dental caries experience. Those participants who had ‘Never’ consumed carbonated drinks showed the highest mean DMFT.

Caries prevalence and caries severity in relation to carbonated drink consumption was high, and similar to that for juices indicating similar cariogenicity.(8, 19) Mean DMFT of those who consumed carbonated drinks ‘at mealtimes’ was surprisingly greater than of those who consumed ‘between meals’; a direct contrast with a previous study from Slater P. et al.(20) Results from the current study showed that the mean DMFT decreased with the use of a straw during consumption. This is in accordance with a study by Tahmassebi et al. which proved that if juices were consumed through a straw, there was a less pronounced pH drop in plaque.(21) Since carbonated beverages and juices possess similar cariogenic potential, the same situation might be true for carbonated beverages.

Oral hygiene (frequency of tooth-brushing) had a strong effect on dental caries experience. DMFT was highest for those who did not brush daily and lowest for those who brushed thrice a day. This pattern is in congruity with the fact that despite the intake of sugary drinks, oral health is an important factor in the etiology of dental caries especially with the advent of fluoridated toothpastes.(22)

Mean DMFT of females was found to be higher than that of males. This may be due to the uneven distribution of males (38%) and females (62%) in our study sample or it may also indicate that dental caries is statistically dependent on gender to some extent, as proven by earlier studies.(3) Relation of social status with beverage consumption patterns, oral hygiene, DMFT etc. could not be derived because of an error in the designed questionnaire. To check the social status of participants, we added the option of “Occupation” but neglected to specify whose occupation we were asking for i.e., of the guardian/parent or of the participant. This lead to a confusion on both the participants’ and the interviewers’ part resulting in incorrect information to be recorded on the forms.

Mean DMFT of the sample was found to be slightly greater than that reported by WHO in 2003.(23) The ‘Decayed’ portion formed a major component of the overall DMFT score, followed by the ‘Filled’ and ‘Missing’ components, indicating that majority of the children do not undergo treatment due to various reasons e.g. high costs of treatment, negligence to oral heath etc. This trend was also observed in a cross-sectional study carried in Karachi.(24)

Study Limitations: It is necessary here to discuss the limitations faced in our study. We employed a cross-sectional design in determining the beverage intake patterns and oral health conditions of the participants. However, use of cross-sectional data to establish cause (carbonated beverages)-and-effect (dental caries) relationship does not draw valid conclusions. Longitudinal study design should therefore, have been employed.(24, 25) Furthermore, the questionnaire that we used in our study did not provide detailed information regarding fluid intake patterns (e.g. of water).(15) Sample size and sampling technique used in our study was inadequate to cover the characteristics of the whole population of Islamabad and Rawalpindi.(26)

No association was found between carbonated beverages consumption and dental caries through our findings. Dental caries was found to be associated with various other factors such as oral hygiene, methods and time of beverage consumption, gender, age, etc.

Further research studies, particularly of longitudinal design, should be carried out are before any conclusive results can be derived. A more detailed dietary questionnaire should be employed to ascertain the complete dietary patterns of an individual throughout the day.

Following guidelines should be followed while consuming carbonated or any other cariogenic beverages.(12)

21.Tahmassebi J, Duggal M. The effect of different methods of drinking on the pH of dental plaque in vivo. International Journal of Paediatric Dentistry. 1997;7(4):249-54.

23.Caries for 12-Year-Olds by Country/Area [database on the Internet]. Available from: www.mah.se/CAPP/Country-Oral-Health-Profiles/According-to-Alphabetical/CountryArea-P/.