Urologic cancer: What about reproducibility of decision made at multidisciplinary team management?

Introduction: The prostate cancer (PCa) treatment is multimodal. Thus multidisciplinary team management (MDTM) decision-making process appears as a tool to answer all aspects of PCa. To evaluate the reproducibility of therapeutic decisions made at MDTM.

Materials and Methods: We compared therapeutic decisions of PCa by presenting the same file of patient under a fake identity after 6 to 12 months from the first presentation. Forty-nine files of radical prostatectomy (RP) (28 pT2, 21 pT3) performed for clinical localized PCa were represented at MDTM which included urologist, oncologist, pathologist and radiologist. Analysis of therapeutic decisions comprised criteria as: TNM stage, Gleason score, margin status and comorbidities. The reproducibility was assessed statistically by Kappa coefficient.

Conclusion: We showed a reliability and reproducibility of decision made at MDTM when guidelines are well defined. The therapeutic attitudes were less reproducible in locally advanced PCa but decision concerning those cases should be made in the setting of guidelines.

The prostate cancer (PCa) is the most frequent cancer in men as well in Europe and USA (1). The PCa counts for 11% of all men cancers and it’s responsible for 9% of the mortality by cancer in men in Europe. In France in 2010, the incidence of PCa was 71577 cases and the related mortality of PCa at the same year was 8791 deaths which represent a 2.5% less mortality per year during last years (2).

The multidisciplinary team management becomes an obligation for all oncologic fields as mentioned by the French government law: cancer program 2003-2007, this program stipulate that each new patient should benefit from MDTM decision-making process, organize the setting of MDTM and also gives tools to develop trials of research for a new diagnosis and therapeutic arsenal (3). Some urologists express some doubt about the interest of MDTM because of it’s a new burden without assigned budget while others see in the MDTM an equality of chance of patients, and possibility to include patients in trials and protocols. Number of European study showed the interest of MDTM and its beneficial impact on survival (4, 5).

From January 2011 to March 2012, 183 patients underwent radical prostatectomy for localized PCa, all of them were presented at MDTM and decision of diagnosis and treatment validated. Within those patients some files were selected prospectively for a second presentation. All of patients were presented identically under a fake identity

Patients were selected after agreement of their urologist who didn’t participate at decision making process at a second presentation. We also presented a case of patient which can be susceptible for debate and distinguished two groups. First one with localized PCa with or without positive margins (pT2 R0 or R1) and second one with advanced PCa (pT3a or b, R0 or R1) regarding 2002 pTNM classification. Criteria of selection was to select patients with localized and advanced PCa, we also selected those at low and high risk of local and systemic relapse based on pTNM and gleason score, two only important parameters «predicting local and systemic relapse after RP» we had at this moment of decision making process (1). Thus we tried to have each half of group with gleason score at low and high risk of relapse. The group of pT2 comprised approximately 50% of patient with gleason score > 6 and the group of pT3 comprised approximately 50% of patient with gleason score ≤ 3+4 (table 1). We compared a decision made for each patient in both MDTM. All decisions were made accordingly to usual criteria as pTNM stage, Gleason score, margin status, comorbidities and choice of patients.

The statistical analysis chosen for comparison between first and second decision made at MDTM was Kappa coefficient which scale vary from non-agreement to perfect. The coefficient Kappa is a statistical tool to assess reproducibility. It also allows an estimate of concordance of qualitative judgments for the same situations by two different observers (6). We compared all criteria of study with t-test for independent samples using means±SD.

From January 2011 to March 2012, 183 patients underwent RP for localized PCa. From this population forty nine patients were selected prospectively and distribution of patients was as follows: 28 pT2c, 21 pT3 (14 pT3a and 7 pT3b). Baseline criteria of patient group and t-test are resumed in table 1.

Our study showed the pertinence of MDTM recommended by Law of cancer program 2003-2007 (3). Many European studies showed the interest of MDTM (4, 5), but number of urologists expresses some doubts about benefits, exposing as argument a new burden without assigned budget. This position is partly supported by Asher PL et al, they reported in 124 cases of urological cancer, MDTM changed therapeutic attitude in only 2% cases, thus authors suggested that urologist could presented only few patients to MDTM which reduced significantly a working cost without compromising therapeutic patient’s chance (7).

Van Belle S showed that MDTM established by the Belgian governmental program was a success thanks to specifically assigned budget. Authors reported also indirect evidence between MDTM and survival rate of cancer in Belgium because it’s within the five best European rates (2,3 and (8)

This hypothesis was sustained by results of Sternberg CN et al study, they concluded of beneficial effect of MDTM on free recurrence survival of PCa in patients at high risk of recurrence, in particular phase III of TAX 3501 where was compared treatment with immediate or differed ADT with or without docetaxel after RP (9).

The lack of well-defined recommendations certainly contributes to the weak rate of reproducibility of decision made at MDTM for locally advanced PCa. GETUG 17 trial which compares immediate EBRT associated to ADT versus deferred EBRT at biochemical recurrence with ADT for patients underwent RP in whom definitive pathology result is pT3 R1( R1: positive surgical margins) will contribute to clarify recommendations. The interest of MDTM is to include patients in the same trial.

To support this idea, Nguyen TD et al showed in their study for breast cancer which recommendations are well designed that 92% of MDTM decisions were in accordance to recommendations and 96% of these decisions were followed by patient’s responsible doctor. They conclude also of the interest of including patients in trial (10). The same conclusions were reported by Carducci MA et al, they surveyed prospectively 8 cancers in 6 hospitals, and they showed that 128 patients of 153 (84%) benefited from specific therapeutic decisions thanks to MDTM. Authors insisted on the interest of MDTM in advanced PCa and inclusion of patients in trial (11).

Several studies seem to end on the interest of a tool to standardize and optimize the therapeutic decisions. Thus, Benjamin A et al reported significant differences in care of localized PCa in the United States of America. Between 2000 and 2001, 2775 cases of localized PCa were collected from 55160 patients. They considered many criteria as geographic location, type of institution (academic hospital or community hospital), pathology analysis and follow-up after treatment. Significant differences were observed regarding geographic origin and type of institution where treatment

was provided. Besides criteria as tumor volume, extra capsular extension and pTNM stage were considered for making decision process respectively only in 37,1%, 68,6%, 48,2% (11). Hardly 55% of patients benefited from a follow-up (12).

Clarke MG et al showed in cohort of 30 urologists for whom were subjected questionnaires representing patients’ scenarios with prostate cancer, a mean of 3 cues from 9 were used to make therapeutic decision. Criteria as life expectancy, digital rectal examination, age of patient and patient’s choice were rarely used. The authors also reported that urologists made a different therapeutic decision in 31,4% cases when they answered a same questionnaire at different time. They conclude that well defined recommendations and MDTM will standardize process of making decision and enhance reproducibility of decisions (13). These observations were also demonstrated by Wilson J et al in their study concerning 32 urologists from Great Britain, for whom 70 questionnaires representing medical history of prostate cancer were subjected. Thirteen questionnaires among 70 were repeated to evaluate intra- observer reproducibility. They reported that intra-observer reproducibility varied from 56% to 79%, while inter-observer reproducibility varied from 24% to 57%. Authors conclude on interest of standardizing therapeutic scheme and working in MDTM process for better decision reproducibility(14). The MDTM appears as an answer to this need of optimizing the care process.

Figure 1: Therapeutic decisions made for pT3aN0M0 group at MDTM 1 and 2 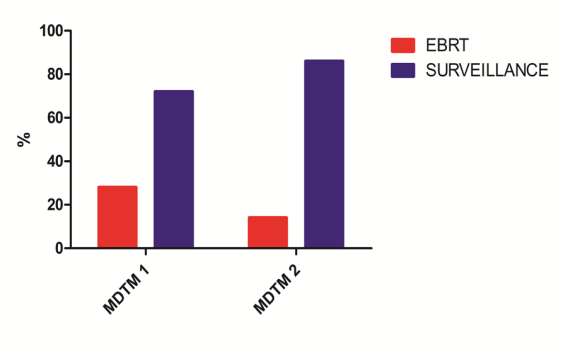 Figure 2: Therapeutic decisions made for pT3bN0M0 group at MDTM 1 and 2 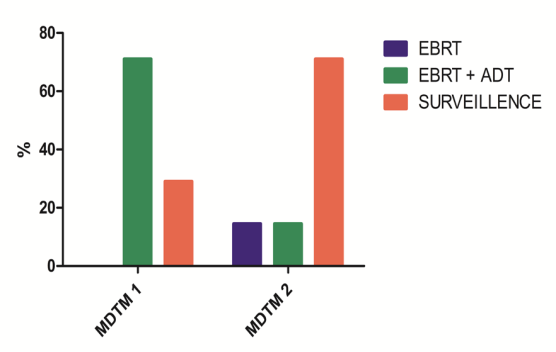