From the last few decades the health care got a tremendous change which make it more accessible to the common person. Pharmacist who is an important part of healthcare team, now his roles have extended from the traditional job of dispensing medicines and elementary medication counseling to working with other health-care professionals at patient bed site and in community (Nkansah, Mostovetsky et al. 2010). Pharmacists are among the most easily available health-care providers. They have roles in medication review, health promotion, and disease management, with in-depth knowledge of pharmacology, clinical Pharmacotheraputics, and patient care skills that are currently underused. Prescribing is not an easy task; it involves significant expertise to apply drug therapy skills, but that is a type of skill that pharmacists can improve. Independent prescribers are responsible for the evaluation of the patients with diagnosed or un-diagnosed disorders, and for decisions about the clinical management required and drawing up a treatment plan. The independent prescriber also has the authority to prescribe the medicines required as part of the plan. United Kingdom was the leading country which introduced new role i.e., Pharmacist independent Prescriber (Avery and Pringle 2005).In United States 38 states were allowed for Collaborative drug therapy management in 2003, however Florida was pioneered in Independent Pharmacist Prescribing (Tonna, Stewart et al. 2008).

Design of this study was based on observational method. A survey was done in order to make findings about independent prescribing of pharmacist in the region of Islamabad. Customers of different pharmacies are being asked questions about prescribing manners in the form of questionnaire. By using this method, full medication history from the patient was available to assess the patient compliance, their understanding of the disease, treatment and related issues.

Three Pharmacies of Islamabad Region were selected to accomplish the purposes of this study. Twenty nine patients were randomly selected from these pharmacies who visited the pharmacies with some general diseases and asked the pharmacist for medication. The selected population of twenty nine patients was informed and made clear about the objectives and purposes of the research study and a permission was taken from each of the patient involved in this study through the consent form. The Pharmacists at the pharmacies were provided with a case history sheet to take history of the patients so that effective medication with minimum interactions could be provided. The history sheet included patient’s name, age, sex, chief complaint, history of present illness, the diagnosis made etc. Each of the twenty nine patients visiting the pharmacies was asked about their medication histories and the history sheets were filled to keep the record. After the review of patient history, diagnosis was made and prescription was given to the patient.

The therapy outcomes and patient satisfaction was evaluated by telephonic interviews from each of the patient. For this purpose a questionnaire was designed, which contained validated questions to evaluate patient satisfaction with the therapy outcomes and patients were asked for their views and suggestions about independent prescribing by the pharmacist.

This questionnaire contained open ended, close ended and choice questions that helped to assess the need of pharmacist in primary health care system as independent prescriber.

The first question which was asked to the patients was whether they know about the pharmacist. This question helped to evaluate how much population of Islamabad region is familiar with pharmacist. 93.1% of population in this study was knew about pharmacist. 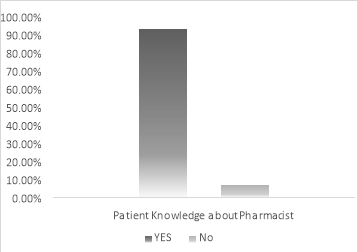 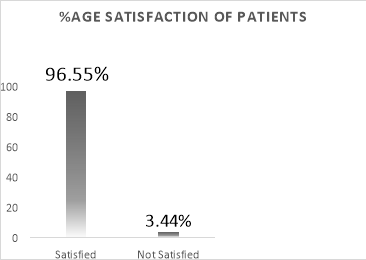 All patients in this study were supportive of pharmacist independent prescribing in primary health care system. There should be an independent setup for the pharmacist to practice diagnosis and prescribe rationalized treatment. Pharmacists are good in general diseases but need practice in broader area of major diseases.