Aim: The aim of this pilot service development was determine if CommunityChildren'sNursingOutreach Team (CCNOT) service as a model of care was effective in its delivery of reducing unscheduled care and admissions to hospital and improving patient satisfaction.

Conclusions: Paediatric CCNOT service as a model of service delivery in acute paediatric care is effective in reducing hospital admissions and increases patient and carer satisfaction with care provision for sick children in the home environment.

Paediatric emergency admissions and length of stay in hospitals in the United Kingdom are increasing (Kyle et al. 2013). Community home nursing service or CommunityChildren'sNursingOutreach Teams (CCNOTs) have been developed to manage acutely ill children athome, to reduce length on inpatient hospital stay andto reduce demand for unscheduled care (Hall et al. 2005). The CCNOT model of care has been shown in a previous randomised controlled trial comparing an acute paediatric hospital at home scheme with conventional hospital care as a clinically acceptable form of care for management of acute paediatric illness (Sartain et al. 2002). Referral pathways to CCNOTs may reduce avoidable admissions and minimise the psychosocial impact of hospitalisation on children and families, and reduce the financial costs to the National Health Service (NHS). Paediatricians and commissioners face considerable challenges in light of recent budget cuts in the NHS. Research undertaken by the University of Central Lancashire and the University of the West of England for the Department of Health described the importance of reliable, accessible expert community home nursing provision to families to enable them to care for their child at home and recorded the families’ deep frustration at the patchy, fragmented postcode lottery provision of services that currently exists (Department of Health 2011).

Services that meet the needs of children and their families must continue to be provided in a safe, high quality and sustainable manner. In our desire to improve the quality of care in paediatric services in the face of rising public expectations, there is a need for change within new working hours and new ways of providing. The case for change can be complex, with decisions made to balance key areas of clinical effectiveness, best practice, patient safety, accessibility, staff retention and sustainability. The Royal College of Paediatrics and Child Health (RCPCH) recognises the importance of ensuring that services for children are designed to provide high quality care as close to home as possible and that such services need to adapt and respond to the demands and needs of the patient. The College's current work to model the future configuration of paediatric services discussed the move towards delivering acute care within the community such as community home nursing service (RCPCH 2005). The aim of this pilot service development was determine if CCNOT service as a model of care was effective and efficient in its delivery of reducing unscheduled care and admissions to hospital and improving patient satisfaction.

Clinical Commissioning Groups (CCGs) are responsible for planning and designing of the local health services in England. Within a dual-site integrated care organisation Southport and Ormskirk NHS Trust, a pilot CCNOT service was developed in March 2013 following negotiations between the Trust and the CCGs in Sefton and Lancashire. The remit of the pilot service specification aims were to determine the effectiveness of CCNOT in the following outcomes 1) reducing length of hospital stay 2) reducing Accident and Emergency admissions 2) reducing non-elective admissions 3) reducing readmissions and 4) improving patient satisfaction. Funding was sought for 7.2 WTE paediatric trained nurses at band 5 to 6 and 0.5 WTE admin and Clerical support staff.

CCNOT referrals were taken from accident and emergency, the short stay paediatric admissions unit (SSPAU), the inpatient ward and from the tertiary hospital Alder Hey Foundation Trust for patients residing in North Sefton, Formby and West Lancashire, which covers a population of approximately 300,000. Collaborations were made with Pharmacy, IT and specialist services to develop robust e-discharge summaries from the community and the ability for CCNOT to deliver three times daily intravenous antibiotics in patient’s homes 7 days a week. The service ran from 7am to 10pm seven days a week. It was also necessary to set up all the operational aspects of the team including admission criteria, clear clinical governance and pathways, robust documentation and purchasing necessary equipment. The service was managed overall by the Paediatric and Neonatal matron.

The CCNOT was led by the paediatric matron with regular supervision and mentorship of a lead CCNOT Consultant Paediatrician. Clear clinical criterias for referrals made to CCNOT were developed and clinical pathways were followed to ensure that each referral pathway was safe and robust. (see Figure 1) Any referral was discussed with the CCNOT between a Registrar or a Consultant. Each diagnostic pathway was clearly followed by the CCNOT team with any deviation discussed with the lead Consultant Paediatrician. Daily handovers from the medical teams were attended by a lead CCNOT member of the day to ensure that any referrals made were handed over verbally and any potential referrals during the day were anticipated. The handovers were also an opportunity to discuss the progress of any patient who remained under the care of the CCNOT.

A structured patient satisfaction questionnaire was conducted with participants who were referred to CCNOT at the time of discharge. Hospital admissions between April 1, 2012 and September 30, 2013 from the Hospital Episode Statistics (HES) were obtained. HES is the national administrative database for hospital activity in England and contains data on all inpatient admissions in the National Health Service.

The data collected shows activity from April 2012 to September 2013. The results of the pilot service for 1) average length of hospital stay (LOS) 2) Accident and Emergency (A&E) admissions 2) non-elective admissions (NEL) 3) and readmissions are summarised in Table 1 comparing the period before CCNOT was implemented (April to September 2012) and the period after CCNOT was implemented (April to September 2013), during the same months of the year. The data showed that there were 28.3% referrals made from A&E, 38.7% from inpatient ward, 11% from SSPAU, 8.9% from outpatient clinics, 12.5% from the regional tertiary centre and 0.6% from another district general hospital.

The data indicates that following the implementation of the pilot, A&E attendances had reduced by 5% per month, NEL admissions had reduced by 15.8%, readmissions had reduced by 17.3% and the overall LOS was increased by 2.3%. Figure 2 shows that there has been a 5% reduction in A&E attendances since the introduction of the CCNOT team. NEL admissions was reduced by 15.8% a shown and although the drop in A&E attendances will be reflected in the reduction in non-elective admissions, this will only account for 5% of the over 15% reduction. The readmission rate has significantly reduced by 17.3% since CCNOT service was implemented. The sources of referral overall were 28.3% from A&E, 38.7% from inpatient wards, 11% from SSPAU, 8.9% from outpatient clinics, 12.5% from the regional children’s centre and 0.6% from other district general hospitals out of area. Overall patient satisfaction was very high and the results are shown in Table 2.

CCNOT pilot service had a positive impact on the performance of the paediatric department in reducing Accident and Emergency admissions, reducing non-elective admissions and reducing readmissions. It was noted that there was a very slight increase of LOS by 2.3% which were noted to be an average of 0.88 days compared to 0.9 days which were not significant. The CCNOT service also improved the patient and family experience considerably from the results of the patient satisfaction survey. The confidence in CCNOT’s competence to safely manage acutely ill children athomeand secure rapid referral to the medical team if a child's condition deteriorated were supported by clear clinical pathways and the regular supervision given by the matron and Consultant Paediatricians. The effectiveness of 'hometreatment' were evident from the results of the patent satisfaction survey. The National Service Framework for Diabetes have advised clinicians and Trusts to achieve current targets by providing high quality care with novel strategies. One instrument to meet these challenges is the development of a paediatric community home nursing service with CCNOT teams as a service model of care in acute paediatrics in the face of reconfiguration of paediatric services.

We have shown in this pilot service that CCNOT has been highly successful in achieving the targets for reducing length of hospital stay, reducing hospital admission from accident and emergency and improving overall patient satisfaction. CCNOT service compared to inpatient hospital stay have been found to be acceptable and preferable to parents and children although there is limited evidence about the clinical and cost-effectiveness of paediatric home care (Sartain et al. 2001, Spiers et al. 2011,Bagust et al. 2002). Concerns have also been raised that children’s emergency admissions in England may indicate that parents often bypass primary care when seeking care for their acutely ill child, perhaps due to lack of availability of out of hours services within primary care (Gibson et al. 2010) The option of referral to CCNOT provides care to children at home by nurses with paediatric training, and has the potential to avoid some onward referrals and preventable admissions. The CCNOT service may be further expanded to provide support within primary care service, however, within the remit of our pilot service specification, the current funding is not sufficient to allow coverage for the populations of GP referrals unless the number of WTE staff is further increased. The relative success of our CCNOT in securing high referrals suggests that an incremental approach to encourage GP referrals is likely to result in increased GP referral rates. This development must be underpinned by financial and organisational investment.

In light of modern NHS in England, and in similar health systems, it is generally agreed that the main focus of paediatric acute services should be the care and support of vulnerable children and young people in the community and as close to home as possible (RCPCH 2009). Financial and organisational investment in the development of CCNOT in acute care pathways are a prerequisite for the success describe in this pilot scheme. It is anticipated that in the future, paediatric services will be delivered by consultants leading a team of trained doctors, nurses and health care professionals working within a multi-disciplinary and skill-mixed team delivering care in the community. Pressures in delivering acute paediatric care also relates to changes in the way junior doctors are trained and the recent years application of European Working Time Regulations have required an increase in numbers of trained doctors to provide 24/7 cover in hospital. This increase has sometimes been at the expense high vacancy rates for medical staff and in particular a national shortage of middle grade paediatric medical doctors is experienced across England, Scotland and Wales (Royal College of Paediatrics and Child Health 2011). There remains limited existing research on the cost effectiveness, development, design and distribution of CCNOT service across acute paediatric care in the UK.

Paediatric CCNOT service as a model of service delivery in in acute paediatric care is effective in reducing A&E admissions, non-elective admissions and readmissions. It also significantly increases patient and carer satisfaction with care provision for sick children with appropriate conditions in the home environment. Our findings identify key factors that may inform the development of a CCNOT service in acute paediatric care to safely manage children at home. 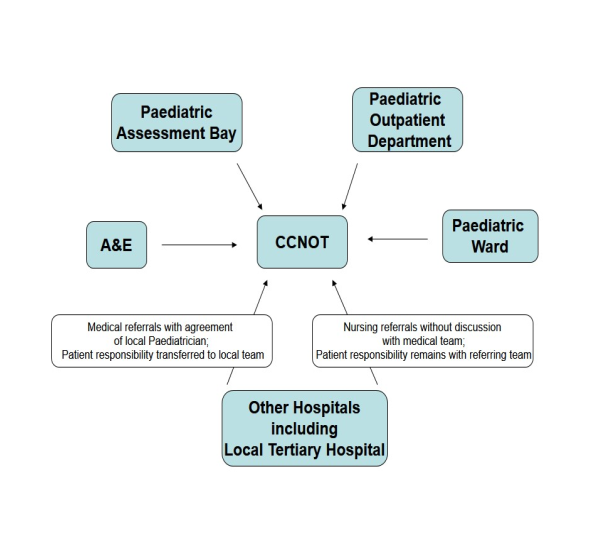 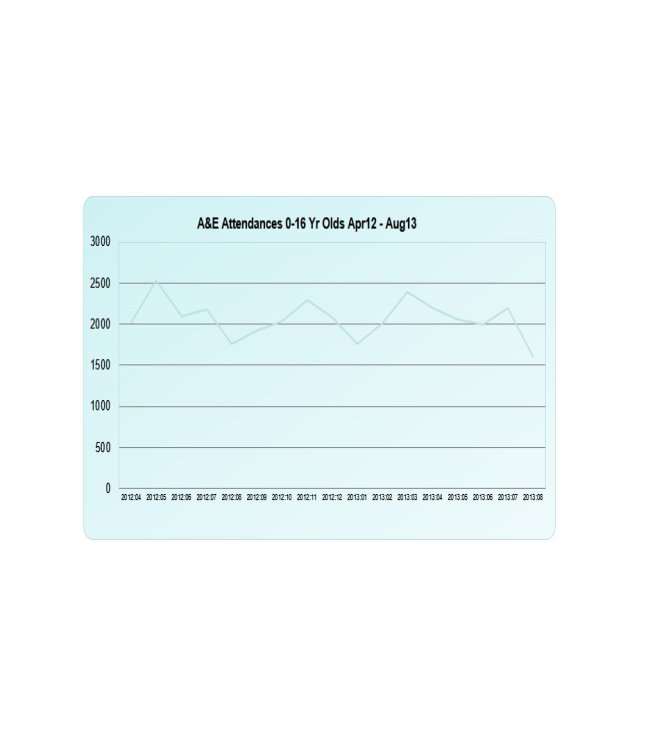