As an aspiring doctor, I am always on the lookout for medical news and keeping up to date with the current affairs is something that has always interested me. Another thing which has sparked my attention over the recent years is the ability of mathematicians and scientists to model infectious disease, in order for the medical professionals to make decisions on how best to act.

For instance, prior to the 2016 Rio Olympic Games there was a lot of controversy due to competitors pulling out of their events because of the scare of contracting and spreading the Zika Virus. It is times like these that processes, such as modelling infectious disease, are so important; in order to understand whether an infectious disease will spread, how it will spread and what the dangers of the spread of the diseases are.

These models allow decisions to be made such as; whether the border control procedures need to change, whether there should be research into developing new drugs or whether they need to take further action and produce a vaccination.

The SIR model is used in epidemiology in order to understand how the disease has evolved over time, and more importantly how it will evolve over time. It is therefore known as a dynamical system; because it tells us how state variables change over time. In this case, the state variables are the population of the three classes; ‘susceptible’, ‘infectious’ or ‘recovered’.

In order to model infectious disease, two parameters must be given:

a = the recovery rate

b = the infectious rate

St= the number of susceptible individuals at time t

It = the number of infective individuals at time t

Rt = the number of recovered individuals at time t

If we specify some values for the recovery rate and the rate of infection, we can begin to understand how individuals move between these classes over time.

Parameters for an infectious disease:

Applying equation (3) tells us the number of individuals that will become infected on day 1:

Therefore, from day 0 to day 1 the number of susceptible individuals will change to:

The change in the number of recovered people, given in equation (5) is as follows:

So the number of recovered people after day 1 will be:

Finally, the number of infectious individuals will be:

Therefore, we can see that from day 0 to day 1 the populations have changed to:

If we repeat the process for the next 3 days, we can begin to see how the disease could spread over time:

Table to show the populations after four days: 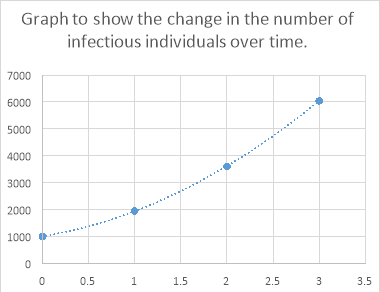 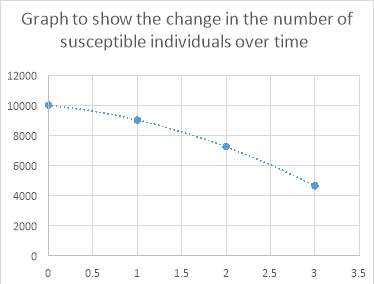 If we plot these on a graph against time we can see how this disease has spread through the population: 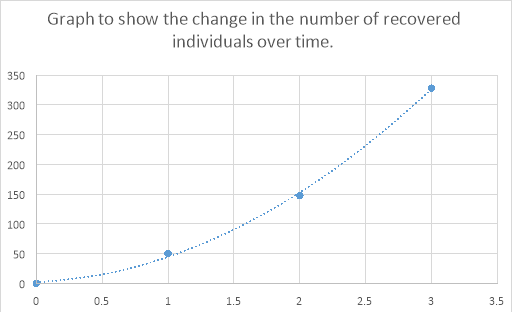 Continuing this process for the next fifteen days gives the following results:

Rounding these numbers to the nearest whole numbers, and excluding negative numbers gives the following table: 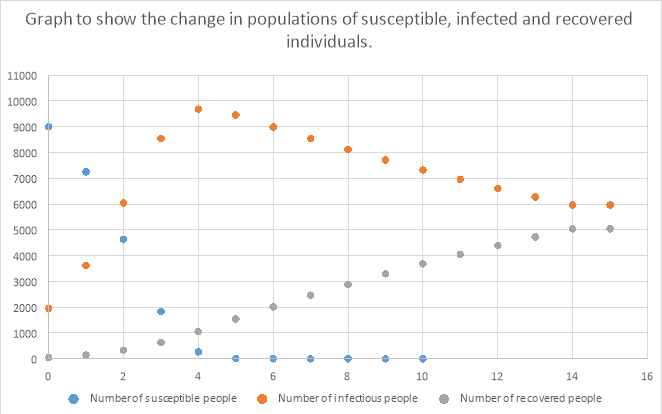 From the graph we can see that there is a point at which all of the groups level off. For example, by day 14 the recovered and infectious group level off, and be day 5 the susceptible group levels off at 0. The SIR model is therefore useful at this basic level in order to see how the three state variables interact with one another.

Using the SIR model for Ebola:

However, in order to model a disease such as Ebola, a few changes to the equations must be made. Two parameters must be introduced; the mortality rate and the duration of the disease.

The SIR model will be used to model the spread of Ebola in Guinea, according to the data provided by WHO, in 2014.

Therefore, the infection rate and recovery rate are as follows:

Bringing back the equations from before, the following values are going to be used, having rounded the recovery and infection rate to 1 significant figure.

The following tables show the process of calculating the changes in populations:

To the nearest whole number, the following table shows the number of people in each population over 28 days. 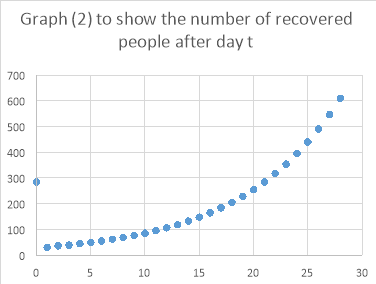 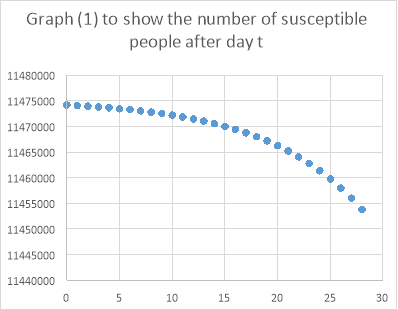 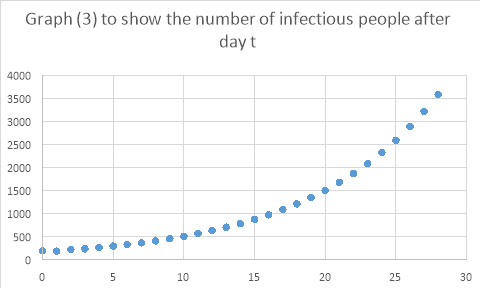 To calculate the equation of graph 1â€¦

The graph appears to be exponential, so using the form y = Aekt , I will try to calculate the equation.

Taking days 3 and 24, I can solve the equation simultaneously.

Substituting into the original equations to find Aâ€¦

Due to the massive range of numbers, the three series cannot be plotted on the same graph, and be of any use. Therefore, three separate graphs are necessary. The graphs show that with the parameters calculated for Ebola in 2014, the population of infectious people seems appears to be increasing exponentially, with no sign of a slowing rate. A similar pattern is shown in the recovered population, whilst the number of susceptible people is appearing to decrease exponentially.

The graphs over just 28 days did not show much, so the equations were used over a longer period of time. These graphs are shown below: 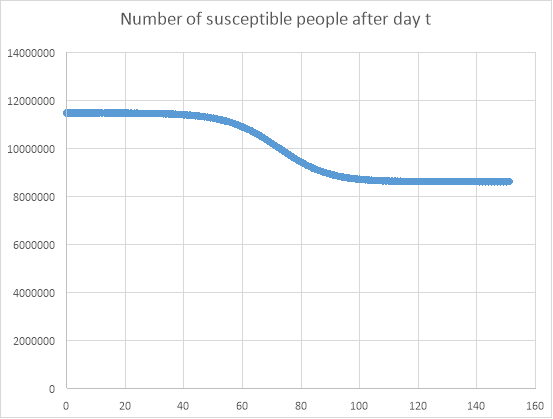 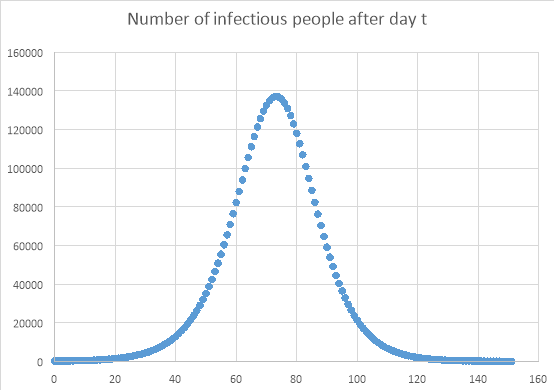 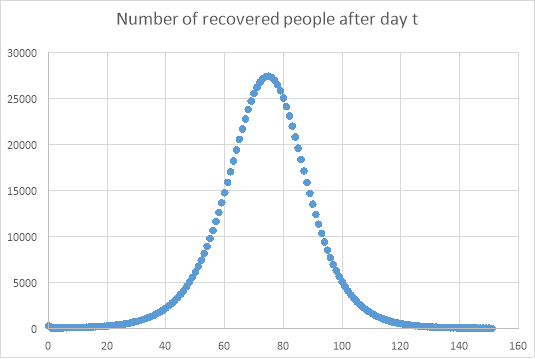 The study of models of the Ebola virus are particularly important at the moment, as there are worries that the disease will spread in a different way, as it adapts to become airborne. Therefore, it is very important to look at how the disease has spread in the past, not just how it could spread in the future.

The graph below shows the number of cases of Ebola in Guinea, Liberia and Sierra Leone.