The health and social care arena is facing some of the biggest challenges for decades. Demographically this is because more people are falling prey to changing environment, deprived economy, social factors, increased population, life style changes, early mortality etc. The research has provided many benefits in discovery of new treatments and technologies used in health care. It can improve the health outcome to individuals which in turn reduces the burden on the health care.

In 1953 Andhra Pradesh was first formed on a linguistic basis by carving it out from Madras area. In 1956 later it was merged with telugu speaking area of Hyderabad state to form a Andhra Pradesh State. In order to keep alive the interest of the Telegu people, Amarajeevi Potti Sriramulu kept pressure on the Madras Presidency government to give a ear to public demand for the separate Telugu speaking state (Rayalaseema and coastal Andhra) to form a new Andhra state. With unbreakable determination he went on a fast, and only stopped when prime minister Jawaharlal Nehru promised to form new Andhra State. On the midnight of 15 December (i.e. Early 16 December 1952), Potti Sriramulu died and sacrificed his life trying to achieve the state. In the history of this telugu state on the 18th Feb 2014 Lok Shabha of India approving the formation of Telangana with ten districts.

The state has tiled over an area of 275000 sq km and has many places of strategic and cultural evidence. It has contributed to have the important place for Worship such as World famous deity, Tirupati balaji. Andhra Pradesh has a population density of 308 which is below the national average. In 2011, the literacy rate is 67% while compared to national average of about 74% and a cause of interest is given. Andhra Pradesh have the best ports in the country with regards to Trade.

Population in Andhra Pradesh in 2011 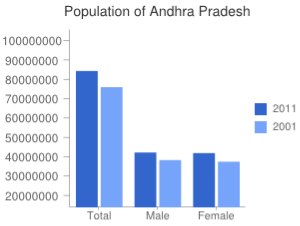 In the total population of Andhra Pradesh 66.67% live in villages of rural areas. Males and females are 56,361,702 respectively. The population growth rate recorded for the decade was 66.64%.

In rural regions of Andhra Pradesh state, the literacy rate for males and females stood at 69.38% and 51.29% respectively.

It is the capital city of Andhra Pradesh and one of the largest state in India. The origin of the name Hyderabad came into picture when Muhammad Qulin Qutub founded the city and named after a nautch girl who got converted to Islam after marriage and adopted the title Hyder Mahal and in her honour the city was renamed as Hyderabad. Hyderabad is located in the north- western part of Andhra Pradesh and lies on the banks of Musi River in the northern part of the Deccan plateau in south India.

Hyderabad has a tropical wet and dry climate ranging from the scale of 21 – 32 degree Celsius. The Hyderabad Municipal Corporation was expanded in 2007 to form the greater Hyderabad Municipal Corporation. Hyderabad has paved in art, literature and cuisine. The city is also attracted with tourist destination such as Chowmahalla Palace, Charminar and Golkonda fort and joining hands with various interesting museums, bazaars, galleries, libraries, sports venues and other cultural institutions. Hyderabad is a shell for information technology, pharmaceutical and biotechnology industries. It is also a home for film industry, education and research having 13 universities and business schools.It became a tourist spot and hub of various cultures.

According to 2011 Census Population in Hyderabad: 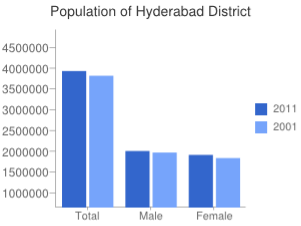 The Andhra Pradesh Vaidya Vidhana Parishad, a department of the state government ,administers healthcare in Hyderabad. Medical services are provided by government hospitals, clinics, private hospitals and charities. In 2010-11 the city had 50 government hospitals, 300 private and charity hospitals and 194 nursing homes together having approximately 12000 hospital beds. The ratio for every 10000 people in the city there are 17.6 hospitals beds, 9 specialist doctors, 14 nurses and 6 physicians. The common people prefer private hospitals as they are standardized with good quality and advance treatment.

According to the 2005 National Family Health Survey, 24% of Hyderabad’s households are covered by government health schemes or insurance. The city’s total fertility is 1.8 where only 61% of children has proved with all basic vaccines( BCG, measles and full courses of polio and DPT) . The infant mortality rate for children below age of five was 41 per 1,000 live births. According to one survey , about third of women and quarter of men and 20% of children are objected to overweight or obese while 49 % of children below 5 are anaemia. More than 2% of women and 3% of men are suffer from diabetes.

Of all the cities of Andhra Pradesh, Hyderabad is the largest contributor to the state’s GDP, tax and other revenues. Its per capita annual income in 2011 was 44,300.

Mission: “In Life we believe”

Dr. Mohana Vamsy, Chief surgical oncologist and Managing director of OMEGA HOSPITALS and come from an experience of 20 years in treating cancer patients along with a dedicated team to work hand-in-hand for best recovery. Omega ha the latest laparoscopic equipment and expertise to perform all major oncologic abdomino-pelvic surgeries. It also has the latest surgical equipment to perform head and neck surgeries with quick recovery.

This hospital was started with a dream of late Smt. Nandanuri Basava Taraka Rama Rao wife of late Chief Minister Sri N T Rama rao who herself was succumbed to the deadly disease. The late Chief Minister and several philanthropists, scients and physians from India and USA created the Basavatarakam Indo- American Cancer Hospital and Research Centre in Hyderabad.

Today, it is a non-profit making organization, bestows care and treatment on par with stands of excellence and affordable price. It is run by two trustees, one based in India and other from United States of America, this institute meet different phase of patients fighting from Cancer. Today it stand proud saving the lives from this killer disease.

Parents and families who come from long distance seek affordable and advanced health care facilities. The Hospital has come forward in providing comfort, reassurance, affordable and effortless Dormitory/ Guest House with A/c and non- A/c Rooms to nigh the patients.

The MNJ Institute of Oncology Regional Cancer Centre is a 40 bedded hospital established by Nawab Mehdi Nawaj Jung and inaugurated by the first Prime Minister of India Pundit Jawaharlal Nehru on 8 of December 1955. It was the first centre to provide cancer care.on march 1996, it was adwarded the status of Regional Cancer Centre. At present it has 250 bedded serving Andhra Pradesh and neighbouring states.

The MNJ Institute of Oncology Regional Cancer Centre is the third cancer centre in the India. It takes pride for the fact of growth. This hospital provides free treatment to approximately to 10,000 new patients and 50,000 follow-up patients every year. Surgery, Radiotherapy and Chemotherapy is provided free of cost to all the patients below poverty line.