International trade is the exchange of goods and services between countries. (International Trade, n.d.) Foreign direct investments are when a company puts a large share into the production ventures of another foreign company, and now controls that business. These methods of trade and investment pave the way for globalization. Globalization occurs in areas like central banking systems, international agreements, and government sectors to ensure economic growth potential. Government sectors like The  Foreign Agricultural Service, The Bureau of Industry and Security, and The International Trade Administration are three key sectors of government entities responsible for U.S. exports and imports that play a part in expanding domestic business operations and policing global trade affairs when necessary, thereby encouraging globalization.

Agricultural trade in America has become highly commercialized into the role it plays today. The modern day Foreign Agricultural Service (FAS) is the result of legislation signed by President Herbert Hoover on June 5, 1930 allowing the deployment of overseas ambassadors to the FAS, entitled the FAS act of 1930. (Wallechinsky, n.d.) It is a foreign affair’s agency made up of overseas individuals that promote international trade and market development.  This service specializes in providing detailed reports on the state of vegetation through important crops in staple countries that engage in trade, among other things. On November 10, 1993, a Government Accountability Office hearing reported that as of April 1993, the FAS had 104 agricultural attaches assigned to 77 posts, in 62 countries. The FAS employed about 150 full-time foreign service employees overseas. The FAS place emphasis on direct communication with foreign officials, so these overseas offices must conduct most of the trade policy analysis work to encourage US foreign direct investment. The geographic placement of foreign officers coincides with markets having significant potential for U.S. exports.  (Committee on Government Operations, 1993) Also, the FAS uses a credit lending program called export financing, where it provides classified country risk assessments and lending. These financial aids are loaned to encourage exports in countries that need assistance. For example, Peru is a big exporter of coffee, beans, asparagus, artichokes, grapes, corn, and soybeans that have a big stake in the market exchange. Exports were $11.3 billion; imports were $8.8 billion in 2017, resulting in a 2.5 billion dollar trade surplus for the US. (United States Trade Representative, n.d.) The US accounts for 24% of total coffee exports from Peru, therefore this foreign direct investment is crucial. In 2009, trade meetings in cooperation with the FAS led to the U.S.- Peru Trade Promotion Agreement in 2009, which eliminated tariffs on trade between the two countries and established a legal framework for investors to trade with companies in Peru, opening up the number of commercial centers in Peru and expanding their business operations. Specifically, the number of these centers increased from 7 in 2000 to 77 in 2016. Those who work within the FAS testify to its paramount importance in negotiating trade deals, Secretary of Trade and Foreign Agricultural Affairs Ted McKinney says “Dozens of experts from across FAS worked with the Office of the U.S. Trade Representative to ensure the best deal for U.S. agriculture, ensuring access for U.S. exports and commitments to fair trade rules.”(Peru Exporter Guide, 2017).  Free Trade Agreements like the one made with Peru has seen a 10% increase from 1990 to 2014, according to the chart below. The Bureau of Industry and Security (BIS) works to encourage growth in numbers seen in U.S. exports, by controlling and regulating technology and sensitive goods that have an influence on national security. Established after the tragedies of 9/11 this government sect concentrates on controlling the influx of machinery or technology that may impose any type of threat on national security (Bureau of Industry and Security, n.d.) The BIS conducts a few crucial actions such as granting licenses, and enforcing sanctions and embargoes to export these sensitive goods or technologies safely so as to preserve commercial interests and minimize harmful trade while encouraging positive and thorough trading practices. Export control has roots in American history, gaining importance in the midst of tensions with Russia in the 1950s, when national security was given utmost importance, and foreign policy was considered the gateway to obtaining that. The Bureau of Industry and Security oversees technology which can be used in commercial operations or military force that are referred to as dual use items by using a licensing process. This process examines all the details about the use of the items, to ensure national safety. This Bureau also places embargos on certain countries, and manages these restrictions. An updated list is in place to keep track of those operations or units that are sanctioned off from importing commodities from our country due to potential threats to national security in the form of illegal activity, or insufficient evidence to tackle any domestic suspicions. Countries currently on this list are Syria, Sudan, Iran, North Korea, and Cuba.

The International Trade Administration established January 2nd, 1980, is the descendant of many trade departments since the beginning of the Department of Commerce in 1903. Its mission statement establishes the ITA as an ally to foreign trade, promoting economic growth in the form of encouraging competitiveness between domestic business operations, and working to achieve free trade, as well as demolish any malicious trading practices. The ITA is an equally an economic and political administration, due to its  development of national export strategies, and administering antidumping and countervailing duty laws.  The ITA functions by using a protectionist policy to protect the U.S. from unfair trading practices began by foreign countries. It does this by utilizing antidumping and countervailing (trade import subsidy balancing) laws. Antidumping laws permit the U.S. to impose duties on any imported goods necessary, after a preliminary review by the ITA. Its task is reviewing the price of a commodity and comparing it to the price of other domestic goods in the same product market, to see if the price of is unfair to domestic producers. The term for the U.S. being comparatively disadvantaged is “materially injured,” and the good will be reviewed so as to be placed on a list of U.S. duties. (Edwards & Dehaven, 2009) These import duties are synonymous with tariffs.  Along with this, the U.S. uses countervailing duty law (CVD), which also functions on the basis of reviewing the fairness of trading certain goods. This process of CVD proceedings functions to reason out if foreign governments are exporting their goods to the U.S. with financial subsidies from the producers of these goods. If these companies are proven to be conducting this operation, tariffs will be implemented. (International Trade Administration, n.d.) Besides, in the fiscal year 2004, the need to implement a government body that advocated for small to medium sized enterprises (SMEs) was sought after by consumers throughout the U.S. The ITA provides domestic exporters pertinent information about the state of the economy, data about private statistics in the market for the trade they specialize in, and an internet source for information called Export.Gov, which gives the chance to exporters to create opportunities to use this crucial export assistance information to increase their export business to grow their companies. Between 1994 and 2002, small to medium sized enterprises taking advantage of the ITA Export Assistance Service information bases were able to grow its production objectives from 48-78% efficiency.  (International Trade Administration, 2004) This proves government sectors are crucial to international trade. 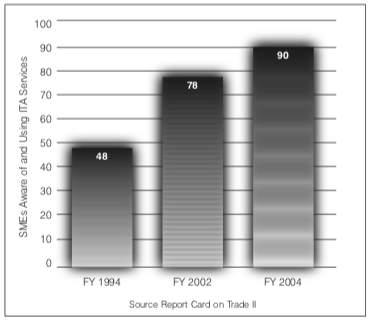 The  Foreign Agricultural Service, The Bureau of Industry and Security, and The International Trade Administration all provide a special service to a country that would not have been exposed to such resources like credit lending programs, export control statistics, trade expansion business agreements, web based information sources, and recurring agriculture data reports. These three key sectors of government entities  oversee U.S. exports and imports that play a part in expanding domestic business operations and policing global trade affairs when necessary, thereby encouraging trade, and creating competition between other industries in the market.