Exogenous comparative advantage is another concept in terms of international trade theory, and is relatively based on analysis of comparative endowment of natural resources among trading countries as mentioned by Ricardo (1817), (Heckscher (19190)

The composition of world trade usually has a trade creation or trade diversion effect, and is the major composition of the world trade matrix. The creation of common country market has a wide effect on trading which is further effect by the tariffs, according to (Bela Balasa 1989) common market countries trade with each other either for reduction in trade tariffs or because of diverted trade.

The concept of Tariffs has three basic to serve as a source of revenue, protect the domestic industries, and the punitive functions

As mentioned by the (ministry of economy, trade and industry, Tokyo, in their report mentions of tariffs 2014) mentions of importance of binding, as sudden hike in the tariffs rates can create negative effect on the trade, As mentioned in their report Tokyo tariffs 2014 the Uruguay round the percent of industrial products that are subject to bound rates in Japan, U.S, The EU,is now about 100 percent.

The effect of tariff as mentioned by (Bureau et al. 2013) mentions of situation on which if the all the WTO members were to increase the tariffs to the maximum level allowed in accordance with their commitment, the will lead to maximum average level of tariffs from 3.6 percent to 12.9 percent and the world rate would decline by 11.9 percent

From the perspective of off shoring an activity of producing the goods in overseas, off shoring and in sourcing and outsourcing are affected by the tariffs (Federico J Diez 2014)

For example half of the United states imports happens in the multinational firms as told (Federico J Diez 2014) , his articles specify that the intra firm imports of the us are positively dependent on the us tariffs  , and that the industries which have a lower tarffis shows relatively less intra firm imports Source: The asymmetric effects of tariffs on intra-firm trade and off shoring decisions Federico J. Diez 2014

3. The Possible impact of tariffs imposed by the US.

International trade can have a wider effect on the entire state of economy, as they are interdependent in terms of gdp and trade, In the beginning of 2018, the United States began to impose tariffs on all products that lead to global retaliation,of the effect can be seen in both the terms from the perspective effect on the US and on the world as a whole, the has been by far more of negative effect seen on their economy

Vandenbussche 2017 estimates that if the united states imports were increased to 15 percent in all sectors, it would lead to the EU having facing the loss of 240 000 or more, as mentioned  the new tariffs rate have increased average US tariffs rate  that were increased from 1.5 percent in the first 5 months of 2018 to 2.6 percent by October 2018  ,a 1 percent increase in average tariffs paid equals to 20 billion to 25 billion in additional tariff cost for us importers.

There has been a negative effect of tariff seen on the exports levels as, as the global retaliation from the US tariffs acts of 2018 on the 232 aluminium tariff rates, china, Mexico, turkey and EU as well had marked tariffs, this can be seen on the graphs mentioned 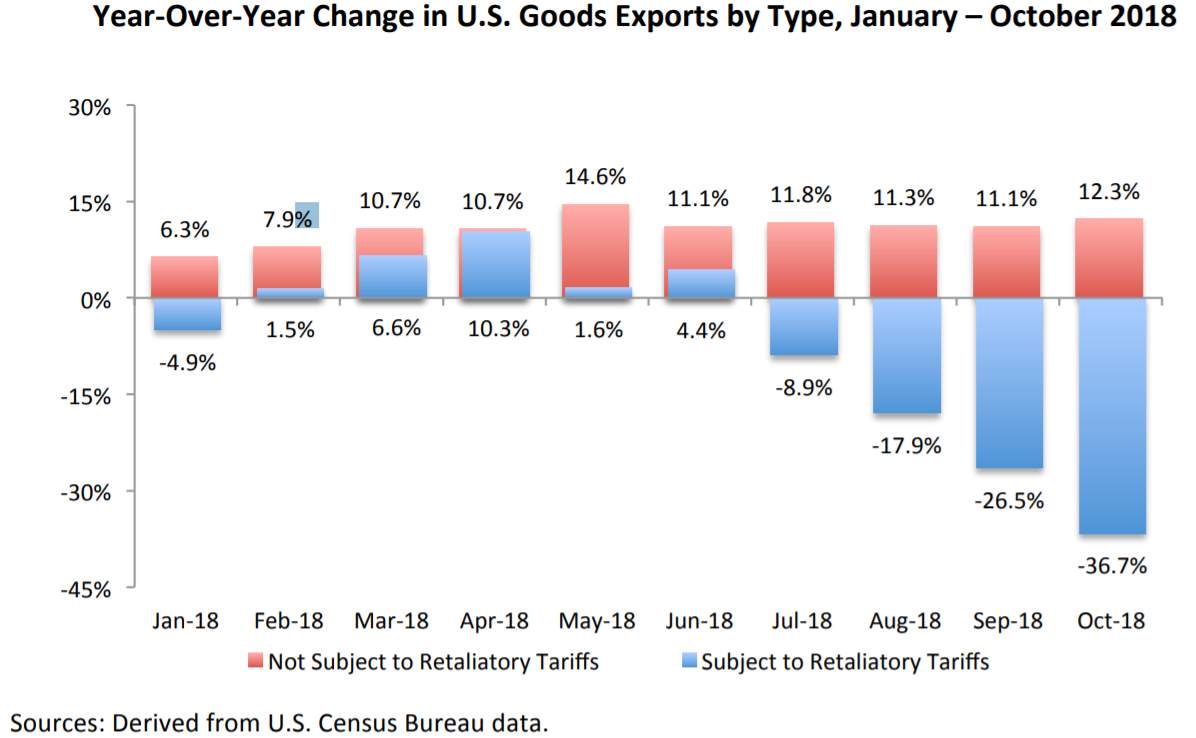 The conventional framework study of theory of price impacts of tariffs by (Stephen J. Redding, and David E. Weinstein 2019 )in their research report  mentions that the import value have declined as the tariffs  were being imposed , which after the imposition of tariffs fell to 25 to 30

As mentioned by Stephen J Redding and avid Weinstein 2019 in the report, that the tariffs  that the tariifs being levied on the imports  were costing the us consumers and companies or the firms of various sizes  that imports the goods from others as foreign goods an additional 3.2 billion dollars per month in added tax cost and another 1.4 billion per month deadweight welfare

4. Summarize the Issues Which Have Led to WTO Ruling

The WTO  formally authorised the united states to impose tariffs of up to 7.5 billion of imports on the EU  in the long running case  that started due to the differences between the both the Boeing and air bus from the benefits that have been receiving from illegal subsidies  , However we access the WTO DSB report by the arbitrator following reason can be taken into consideration , as  The  first of June 2011, the dispute settlement body of the WTO , has taken into consideration the point given out by the appellate body for the case of the subsides , this report has been given out by the original report panel as modified by the appellate body”

“As mentioned in the report of the arbitrator on sec WT/DS316/ARB 2019 the report clearly mentions the imposition of tariffs  can be majorly due to their non removal of subsides  in the report  by the WTO as found stated  “The compliance panel found that the European Union and certain member States had "failed to comply with the DSB recommendations and rulings and, in particular, the obligation under Article 7.8 of the SCM Agreement 'to take appropriate steps to remove the adverse effects or … withdraw the subsidy”.

If were to look at reports o (DW 2019 )another reason that can been seen is the WTO ruling found that the EU had supported the  Air bus with loan at subsidies zed  loans for making of new aircraft and the loan was repayable in on delivery amount to illegal assistance.  The other reason that can be attributed to the cause of the Wto ruling is the losses that US had to face due to illegal subsidies given out to the European air production company

5. Selected Product and Comment on the Reaction to Tariffs Imposition

As mentioned in the financial times report by (Jim Brunsden 2019) according to the report US is the largest market for Scotch whisky with and 1 billon turnover, the export of the scotch whisky to the UK had been zero for the past 20 years, the effect of the trade can be specifically seen in the companies to mention of Mary Queen of Scots Enterprises (Kinross) Limited have to say that this will have effect as they are into whiskeys and beer with the tariffs they will lose a lot of business

As mentioned in the report by smith 2019in the courier newspaper, the single malt Scotch whisky represents more than half of the total value of UK products on the US Government tariff list which is amounting to over $460 million, which can have great effect on the market share.

In a report by the financial times 2019 the sales for whiskies to the us last year went to 1 billion, which is subject to tariffs  , the tariffs  will have a direct effect on the sales
.