A loss of habitat can happen naturally or destruction of human activity.  For instance, dinosaurs lost their home about 65 million years ago due to the hot, dry climate of the Cretaceous period changing very quickly, most likely because of an asteroid striking the Earth. The impact of the asteroid forced debris into the atmosphere, reducing the amount of heat and light that reached Earth’s surface. The dinosaur population was not able to adapt to a cooler environment. Dinosaurs became endangered due to the drastic change in environment, then extinct.  These species, in particular, are ones that could not be saved due to the change in habitat and overall sustainability of the environment.   Research shows that there is not enough dinosaur DNA so it is unlikely to see a reenactment of Jurassic Park/World in real life, but I find it very fascinating.  It is weird thinking about if dinosaurs and humans could coexist but it is not something that is deemed to be possible.  Is this climate change to blame for or nature taking its course? 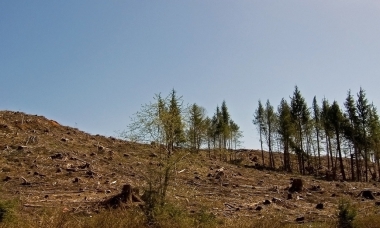 Human activity is the number one contributor to loss of habitat. The increase of development for housing, industry, and agriculture reduces the habitat of native species. “About 60 percent of species that the Committee on the Status of Endangered Wildlife in Canada identified as being at risk affected by habitat problems” (canada.ca).  If a species cannot find proper conditions in which to live, it simply will not survive.  As the human population grows, development increases and spreads over the landscape to satisfy the wants and needs of the human population. The construction of houses, buildings, and roads; logging of vast regions of the forest for paper and building materials; mineral extraction; and conversion of wild habitats into agriculturally productive fields all mean that habitats shrink for wild species. When habitat shrinks, species are pushed out looking for a new place to adapt to or will wander around the neighborhoods and backyards of peoples’ homes.

The presence of the human affects species in many other ways as well. Things that we really don’t pay attention to like vehicles on the roads; are particularly dangerous to birds that tend to feed near roadways, squirrels, groundhogs, deer and other wildlife of that nature. For instance, the control of water flow in rivers, usually for the generation of electricity, changes circumstances downstream, often rendering these bodies of water unsuitable for certain species, or restricts their ability to travel to different parts of the system they need for feeding or to reproduce. Taking certain precautions wherever you go can potentially save animals that are in danger, like doing your daily tasks by driving or hiking could involve humans interacting with animals.  Just being aware and knowing how to handle the interactions will be the safest way for you and the animal to go on with the day. In 1973, Congress showed worldwide leadership by creating the Endangered Species Act. The Act has been successful, no law has been more important in preventing the extinction of wildlife, including bald eagles, gray whales, polar bears, etc. Many species protected under the law are on the pathway to recovery.  Worldwide, plants and animals are disappearing at a disturbing rate, and the natural systems that all species, including humans, depend on are at serious risk. “In the United States alone, scientists estimate that more than 500 species have disappeared in the past 200 years” (Protecting the Endangered Species Act).

Unfortunately, with Trump being in office some things changed for the better and some for the worse.  “Some in Congress appear willing, even prepared, to break our nation’s promise to future generations to protect our natural heritage” (Fears, Darryl).  Something that is currently happening right now is not going to benefit any type of wildlife in danger.  “The signal being sent by the Trump administration is clear: Protecting America’s wildlife and wild lands is simply not on their agenda” (Fears, Darryl).  One false accusation was the Endangered Species Act failed to protect and recover threatened and endangered species which is not true.  The Endangered Species Act was one of the most effective by rescuing hundreds of species from going extinct, and a good majority of them would not still be here today.  The Trump administration is cutting their funds down for this program.  It is still unclear whether or not the program will raise enough money in order to continue to run it.

I believe that it is important for the communities to get involved and do as much as they can in order to save these plants and animals.  We can either be there voice or ignore the fact that this is even happening.  As the people, we can get involved by joining The National Wildlife Organization. This organization defends and enforces The Endangered Species Act, which makes it illegal to harm endangered species. The National Wildlife Organization also holds the various federal agencies, like the Environmental Protection Agency, responsible for upholding the laws that protect endangered species. The organization tries to reduce the threats to wildlife that lead to their endangerment by encouraging limiting the use of pesticides and advocating care to avoid contamination of the water.  Become an advocate of the dangers of global warming. Changes in temperature due to global warming directly affect plants and animals through threats of disease, wildfires and the loss of their natural habitat.  Vote for all legislation that pertains to the protection of endangered species. Volunteer at one of the numerous organizations dedicated to protecting endangered species. There are so many ways people can get involved, but don’t realize the resources at there fingertips. With all of these options, I plan on getting involved with small projects in my own community and work my way up to be an advocate for saving endangered species. I recently started watching this documentary on Netflix called “Our Planet” where travelers will travel to different parts of the world experiencing different types of wildlife.  Discovering how each fragile habitat is connected and why they are all essential for life and to thrive on this planet.  Essentially what we do in the next 20 years will determine the future of all life on earth.  Something that really bothered me was this quote “We are entering a new geological era, not as in the past when changes happened over millions of years, not even over thousands of years or centuries, but within decades within my lifetime” (Our Planet). It’s a shame that it has to come this far for us to finally want to change our habits. We only get ONE planet to live on and only ONE life to live, so we need to do it right the first time because there are no do-overs.

During the Coastal Seas episode, they were discussing how global warming is affecting the acidity in the oceans waters and that the coral reefs have a hard time adapting to change causing all them to die in just a few months, and just a few decades for all of them to completely disappear.  Every episode is very eye-opening seeing the change in the environment/ habitats is really upsetting. Our actions are making other creatures suffer and it is nothing to take lightly. They didn’t ask for their habitat to disappear or die off, they didn’t ask for higher sea levels, etc. Our job is to make sure they are safe in an environment that they only know of and not taking it away or causing harm.  As a child, growing up, my mom would always educate my brothers and I on animals and the consequences of touching the animals if they had a nest in our yard.  We learned respect of the animal by not touching it and giving the species proper space.  We also learned that our space is also wildlife space and the importance of sharing it with all different species.  Not only did we learn that but how important species are for the environment and how they impact our way of living in a positive way.

The recovery plan is the current status of species who are returned to a healthy state.  Many of the species are taken off the list as soon as they are able to sustain themselves back into the environment they once lived in.  Species are then monitored in the environment to make sure they are adapting the way they are supposed to. Last semester I took a Field Ecology class that did similar actions where we were able to catch turtles and learn the proper markings to be able to monitor growth and age.  We also watched a few videos of professional field ecologists monitoring birds, sharks, and sea otters, rehabilitating them and releasing them back into the wild.  Another thing that was interesting was how they caught sharks to put on a tracking device, being able to track them on a website called Ocearch.org to monitor their progress and them living out in the wild again.