In the world today, systems in which countries come together in agreement of sharing single money. The system is called currency or monetary union, its importance and number of participants is growing. In May 2005, 52 out of 184 IMF members participated in currency unions (Rose, 2006).

A currency union can be defined as a system where two or more groups usually countries share a common or single currency in order to keep the value of their currency at a certain level (Investopedia, 2015). It can also be defined as an agreement among member’s countries or other jurisdictions to share a common currency, and a single foreign and monetary exchange policy (Rosa, 2004).

Currency unions occur when a poor country unilaterally adopts the money of a larger “anchor” country. For Example, a number of countries currently use the American dollar such as Panama, Ecuador, and a number of smaller countries and dependencies in the Caribbean and Pacific (Rose, 2006). In Africa, Swaziland, Lesotho and Namibia all use the South African Rand thereby forming a currency union (Multilateral monetary area). In these cases, the exchange and interest rates of dependent countries are influenced and determined by the anchor country, generally in the interest of the anchor.

There are a number of multilateral currency unions between countries of similar size and wealth such as the East Caribbean dollar: Anguilla, Antigua and Barbuda, Montserrat, Grenada, Saint Kitts and Nevis, Saint vincent and the Grenadines and Saint Lucia. The Central Bank of the West African of the CFA franc: Benin, Burkina Faso, Guinea-Bissau, Mali, Niger, Senegal and Togo and also the Bank of the Central African States. Other currency unions in the world are the monetary authority Singapore, eastern Caribbean currency union, multilateral monetary area etc.

The largest currency union is the Economic and Monetary Union of the European Union which began on the 1st January 1999, although the euro was only physically introduced three years later. Twelve countries instituted the euro as a legal tender, delegating and determining monetary policy for EMU to through the international European central bank. One of the reasons of forming a currency union is mainly to synchronize and manage each member country’s monetary policy which could be done through lowering of transaction costs of cross-border trade (Silva and Tenreyro, 2010)

The union is expected to grow more with Cyprus, Malta, Slovakia and Slovenia recently joining the area and other states such as Monaco, San Marino and Vatican City unilaterally adopting the euro as their sole currency however, Sweden, Iceland, Denmark and the United Kingdom have rejected membership but maintained debates on the advisability of adopting the euro particularly after the onset of the global financial crisis (Carney, 2014).

Currency unions have no definite size therefore there is no appropriate domain for a currency. The use of a single or common currency is advantageous to regions as well as can also cause problems in the dual presence of asymmetric shocks and nominal rigidities (in prices and wages) (Mundell, 1961).

The effect of the size on currency union tend to create more open and fewer nominal rigidities for smaller countries making them better candidates for currency unions (Mckinnon, 1963). The effects of the economy’s degree of diversification could result in fewer asymmetric shocks and accordingly fewer benefits from national monetary policy.

The insights of the theory of optimum currency areas provided by Mundell (1961) concluded that common currency areas are defined by internal mobility and external immobility of factors of production. According to this theory, the optimum size of currency area depends on the tradeoff between the macroeconomic efficiency gains and micro-economic costs. The forming currency unions have its costs as well as benefits.

Generally, the main cost of joining a currency union is the loss of an independent monetary policy with the inability to react to shocks through exchange rate adjustments. Monetary independence can be beneficial when shocks are regionally specific, alternative mechanisms are weak and when exchange rate changes function as means of lightening idiosyncratic shocks

Countries that could potentially let their exchange rates adjust to justify the impact of shocks often display fear of floating and thus do not exploit the automatic stabilization properties of exchange rates (Calvo and Reinhart, 2002). Countries reluctance to implement monetary policy to tackle shocks could be linked to its actual effectiveness; less effectiveness of monetary policies to facilitate the adjustment or possibly wider consideration such as fear that it may trigger beggar thy-neighbor responses by trading partners inducing structural volatility in the financial markets.

Besides the absence of price adjustment mechanisms, output stabilization and currency revaluation in the currency union faces another challenge. A system of income transfers is necessary for softening negative asymmetric shocks in countries that have joined a currency union however; the prospect of income transfers between countries generates the type of moral hazard commonly seen in insurance models (Grabner, 2003).

Another cost of currency unions relate to overcoming structural differences among the countries. The transition towards a monetary union is likely to expose structural weaknesses (Jacquet 1998 and Grabner 2003). By entering a monetary union, countries lose the ability to correct their monetary troubles in short term. The necessary structural reform preceding the acceptances of a single currency focus on issues like taxation, supervision of capital markets and also mutual recognition and harmonization of labor markets (Jacquet 1998).

Furthermore, the cost or problem of currency union inability of participant countries to independently choose an inflation rate. It seems relatively less important now than in the past as improvements in available technology to central banks enable sustainable inflation that result in low actual inflation rates in most countries however if a country plagued by low productivity enters a currency union of higher productive countries, it could experience higher inflationary rates (Coleman 1999).

One of the main benefits of currency unions envisaged by Mundell (1961) is the elimination of currency conversion costs and greater predictability of prices which would increase trade. The savings are more significant for small, open and less developed countries whose currencies are not used for international payments (Grabner 2003). Coleman (1999) mentions the savings from the reduction of transaction costs and reduction of price uncertainty together account for 0.4 percent of GDP in the Eurozone.

Increased price transparency and reduced price uncertainty are often quoted as interrelated benefits of currency unions. The reduction of price uncertainty is linked to the use of unit of account which is simultaneouslu used by broader economic area (Zika, 2006). The even disappearance of exchange rates removes a vital barrier to trade integration; this furthermore leads to better information, increased competition and price transparency (Jacquet 1998 and Grabner, 2003).

Further benefit of monetary union is the removal of competitive devaluations by member countries which also known as “beggar-thy-neighbor” policy (Kronberger, 2004). Within currency unions, both importers and exporters have a strong interest in avoiding disproportionate swings in exchange rates. The transfer of resources between regions by the centralized monetary authority through its money issuing function. These transfers can be used to diversify the risk of expected economic shocks however; public finance plays a significant role (Voss, 1998).

Finally, the vast economic area of currency unions increases the effect of networking. The adoption of a single currency in a bigger economic area creates greater benefits for all users.

The core argument for entering the EMU is the elimination of exchange risk against the euro which would promote much more trade with and within Europe by merging the rather risky and limited sterling capital market into a bigger and less risky euro capital market. The joining of the Eurozone is not to world currency but a regional one. Outside of Europe, most of the world either uses the dollar or is tied to it in some way therefore trade and investment would be half with the euro area and half with the dollar area. But over the years, euro/dollar exchange rate has been highly variable which when compared to British pound/dollar exchange rate it doesn’t seem convincing. If the UK remains outside, the pound can go between the two currencies as the euro swings occur against dollar thereby sitting on the middle of a seesaw. Looking at this, there is no necessary gain in the exchange risk reduction in UK joining the Eurozone and that it is even possible that the overall risk would rise. 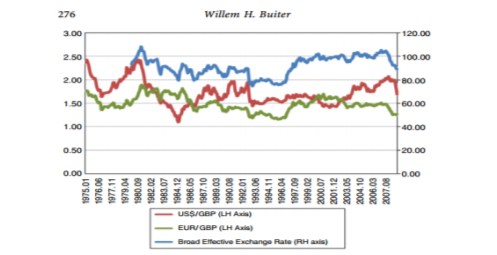 The benefit of price transparency and comparison between UK and Eurozone is also of little importance in the sense that United Kingdom has no land borders with the Eurozone unlike Belgium and Netherlands. Given this fact, the comparing of prices between both zones is irrelevant. 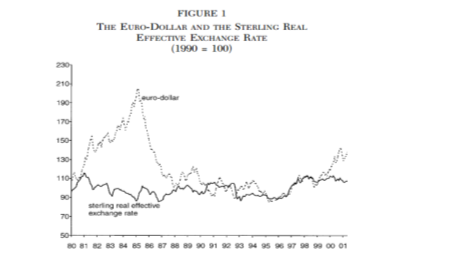 In terms of bailout and the emerging state pension crisis, growth and development is slower than expected while unemployment is turning out to be higher. The politics of pension cut benefits is speculative given that the aging population will increasingly be dominated by older voters. The effect of raising taxes further would lower growth and increase unemployment. It is a matter of concern to the UK that cost of meeting explosive financial liabilities might somehow impact British taxpayers.

In conclusion, the reduction of transactions cost of currency exchange would be roughly offset by the one-off cost of currency conversion. There would be some gain from eliminating exchange risk against euro but this would be offset largely by the volatility against the dollar with around half our trade broadly defined with countries either on or closely linked to the dollar. Generally, the exchange risk does not appear to have an important effect on trade or foreign investment, and in the UK case, on the cos of capital.

Honestly, I would like to advice that the UK waits and properly assess and plan out different projects. Due to the structure of the Eurozone, I am strongly against the UK joining the Eurozone which is the best interest of British citizens

Guillermo A. Calvo And Carmen M. Reinhart. (2002).Fear Of Floating.

Robert A Mundell. (1961).A Theory of Optimum Currency Areas.