International labour markets are an important part of the process of globalization and economic interdependence across countries and regions. This is essential to develop evidence-based policies. International migrations act as a basic device of economic building for both exporting country as well as importing country.They provide remittances for migrant sending countries which help its economy. On the other hand it’s also important for the development of migrant receiving counties. India has one of the worlds most diverse and complex migration histories. Indian Migration to different part of the world is not new phenomenon. After India’s independence the main destination of Indian workers was especially English speaking countries like US, UK, Canada, Australia and other developed countries. But oil boom in the gulf region in 1973 and with the beginning of development programmes in these countries[1]. The nature of Indian migration totally changed. This process resulted in a massive emigration of workers from India to gulf countries. During the respective period, there was concern that India was losing its educated workforce to the Western countries. Migration of Indian manpower to gulf region offers an opportunity for providing fruitful employment to Indian unemployed persons[2]. Before 1970, there were only 3,000 Indian merchant families in Dubai which was the major trade centre in the region[3]. On the one hand, India’s migration to gulf countries is important key factor for development of gulf countries as well as other West Asian countries. On the other hand, by and large they earned good name for themselves and for India by their hard work, skill and competence. At the end of First World War, what is now Iraq was awarded to Britain as mandatory territory by League of Nations. The British administrator thereupon started taking Indians to this country to build up its railway and ports, established its post and telegraph departments, its inland water transport system and various public utilities. Some India as began to man minor posts in Iraq as clerks, technician and accountant, both public as well as private organisations. But prior to 1973 Iraq and Oman were net exporters of manpower countries. Thereafter, both became the major labor importing countries.

The Composition of India’s migration to west Asian countries changed because of significant oil price hike in 1973 and consequent earning of large revenue accelerated of social changes in Iraq as well as other West Asian countries[4]. Subsequently, Iraq began an ambitious programme of modernisation. This was characterised by massive investment in economic and social infrastructure and necessitated the service of large number of foreign workers. Migrant workers were required not only in construction projects. But also to work in industry, trade and service sectors. Indian companies were successful in winning a number of civil construction contracts. This trend of awarding major projects to Indian companies continued through the 1980s in spite of the Iran-Iraq war. Thousands of worker arrived in Iraq for the execution of those projects. Due to the further oil price hike in 1979 government revenue rose sharply in the course of a single year. As a result, the Gulf States launched more ambitious development plans, lavish projects, and even more generous social welfare programs. These initiatives caused a surge in demand for an additional 700,000 migrant workers in Saudi Arabia and the other GCC countries in 1980. The number of migrant workers in Iraq also increased to about 750,000.The number of Indian workers alone exceeded 500,000 by 1980. Whereas numbers of Indian expatriate workers in Iraq peaked to nearly 80,000 by the late 1980’s. Apart from the increasing number of workers, two other trends emerged during this period. First, the share of Arab migrant workers declined from about 43% in 1975 to about 37% in 1980. This was primarily due to the inflow of Indians, Pakistanis, Sri Lankans, and other Asian workers to the region. This was perhaps the result of the policies of the Gulf countries that favoured South Asian workers. Second, the demand for unskilled labor slowed as major infrastructure projects were completed, while the demand for skilled workers increased. After that Indian’s migration to Iraq as well as other gulf countries decline sharply during 1980s due to decline in oil prices in late 1982, contraction of oil revenues, some development projects slowed and demand for foreign workers slackened. However, the preference for skilled workers continued[5].

The Iran-Iraq War (1980-88) and the 1991 Iraq War helped to attract migrants to this country. But gulf war 1991 and UN sanction on Iraq disturbed India’s migration to Iraq. After that Indian migration to Iraq sharply declined. Large amount of the migrants have come back and settled down in their native places seeking self employment. Consequently, it was the Gulf war of 1990-91 that had woken up the Indian policy makers about the vulnerability of its workers in the Gulf, and the importance of their remittances to the economy. The increase in petroleum prices, associated with fall in remittances of Indian workers in Kuwait and Iraq and the added expenditure of airlifting Indian citizens from the Gulf. Indian unskilled and semi skilled migrant move to other gulf countries i.e. Saudi Arabia, UAE etc. Provided further impetus to the Indian economy to precipitate the reforms that started in early 1990s. However, with change in the paradigm of migration, it was the perception of high-skill emigration to industrial countries which had changed much more drastically than that on labour migration to the Gulf countries[6].This migration lightly revived with oil for food programme. But just after couple of years this continuously declined tremendously up to end of the saddam hussain regime. The Indian Diaspora in Iraq as well as other gulf countries consists of entirely of ‘Non resident Indian citizen (NRIs). The details of India’s migration to Iraq are provided in the following table.

2. Report of high level committee of the India diaspora, Government of India 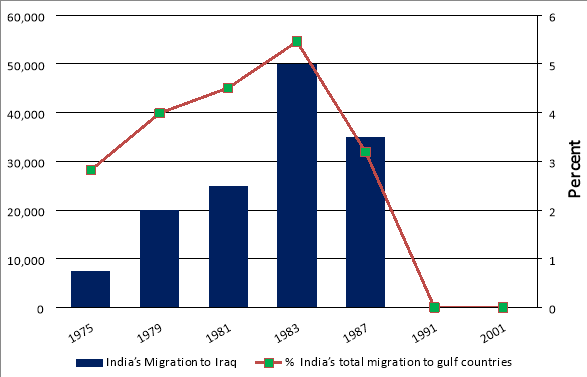 The volume of Indian migrant population in Iraq is much larger than the volume of migrant workers. The data on the destination of this outflow by country of destination is given in the table 4.9. This table gives comprehensive Trends of labour out-flow from India to Iraq from 1982 to the 1990.

Table No. 4.9: Annual labour Migration from India to Iraq

Fig No. 4.5: Annual labour Migration from India to Iraq 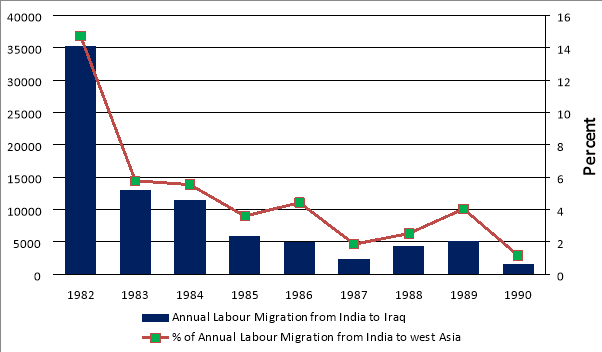 We can now summarise by saying that this chapter an attempt was made to throw light on the actual status and it does just describe what gone of India’s economic cooperation with Iraq through comprehensive study about trends, pattern and commodity composition of Indo-Iraq trade during Saddam Era. Where, it was revealed that trend of trade relations between India and Iraq during Saddam regime grew up and down dramatically due to Iran-Iraq war and two gulf wars in 1991 and 2003. However, India and Iraq are long standing economic partners, with significant mutual trade in the pre-war period. The comprehensive study of this chapter to found that compound annual growth of Indo-Iraq trade, India’s total trade and Iraqi total trade has been found as – 14.56 % percent, 8.05 % percent and -4.62 percent, respectively over the period. This implies that Indo-Iraq trade was the worse in performance as compared to India’s total trade and Iraq total trade during Saddam Hussain’s Period. Thus it can be concluded that Indo-Iraq trade suffered serious setback. Indo-Iraq trade reduced more speedily than Iraq’s total trade. Whereas, India’s total trade increased tremendously during saddam era. The analysis further found that India’s trade with Iraq has been tremendously unbalanced due to Over Representation of India’s imports from Iraq. It is also found that, India’s migration to Iraq was significant before gulf war 1991. After that Indian migration to Iraq sharply declined up to the end of saddam regime.