In today’s technical era, the financial organizations have great challenges to optimize the cash management process. Maintaining minimum cash leads to customer frustration. At the same time, upholding excess cash is a loss to the organization. Hence, soft computing based cash management solutions are required to maintain optimal cash balance. An Artificial Neural Network (ANN) is one such technique which plays a vital role in the fields of cognitive science and engineering. In this paper, a novel ANN-based cash Forecasting Model (ANNCFM) has been proposed to identify the cash requirement on daily, weekly and monthly basis. The six cash requirement parameters: Reference Year (RY), Month of the Year (MOY), Working Day of the Month (WDOM), Working Day of the Week (WDOW), Salary Day Effect (SDE) and Holiday Effect (HDE) were fed as input to ANNCFM. Trials were carried out for the selection of ANNCFM network parameters. It was found that number of hidden neurons, learning rate and the momentum when set to 10, 0.3 and 0.95 respectively yielded better results. Mean absolute percentage error (MAPE), and mean squared error (MSE) were used to evaluate the performance of the proposed model. MSE that was less than 0.01 proves the capability of the proposed ANNCFM in estimating the cash requirement.

Forecasting cash demand needs to be more accurate for any financial organization including banks [1-3]. If the forecast is flawed, in addition to making financial losses to the banks, it results in customer dissatisfaction. In banking industry, an earlier cash requirement study was made using feed forward neural network with back propagation for short term data of two months [1]. Subsequently another comparative study was made for the cash anticipation using a classic time series models and artificial neural networks [2]. The daily cash requirement models for a bank were optimized with particle swarm and compared with least square method for short term data [3]. The main objective of the paper is to design, develop and test a unique supervised method to forecast the cash requirement for banks from their historic data.

ANN is an efficient tool in understanding the complexities of real world problems in all fields of our daily life[4]. It is used as a function optimizer for linear as well as nonlinear problems in science,engineering,technology,management and finance[5-9]. Artificial neural network learning methods provides the best approach for approximating discrete,real and vector valued target functions [10-12], for complex problems, which are not possible to solve by conventional mathematical methods like analytical and numerical technique. ANN are applied in forex market prediction,portfolio optimization,decision making, metrological parameters forecasting[13-19] etc.,

In general, the design of multilayer ANN can have many layers where a layer represents a set of distributed parallel processing nodes. The three layered ANN network with one input, one output and one intermediate hidden layer is sufficient to approximate any complex non-linear function. In the case of forecasting studies many experimental results also confirms ANN with one hidden layer is enough to predict the required data [6-8]. The model architecture of ANNCFM is shown in the Fig1.

The important critical decision is to determine the architecture is i) number of layers, ii) number of neurons in each layer, iii) number of arcs which interconnect with nodes , iv) activation function of hidden and output nodes, v) training algorithm, vi)data transformation or normalization, vii)training and test sets and viii)performance measures.

The proposed ANNCFM model consists of one input, one hidden and an output layer as discussed in section 2.1. In this study the data was collected from a semi–urban area bank located in India. The typical daily cash requirement for thebank for one year is shown in Fig2. 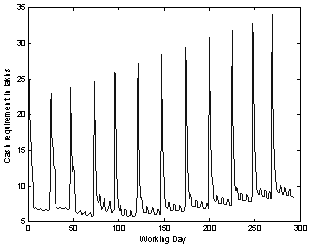 The collected data was for a period of three years (2010 to 2012) and was used for training and testing with the following input parameters:

The fore mentioned parameters were used as six input neurons. In the hidden layer, the number of neurons were varied from 8 to 50.The output layer had one neuron that corresponds to the optimal cash requirement for a day.

For each training sample x(I,nip)

//Determine the output neuron between input layer and hidden layer

//Determine the output neuron between hidden layer and output layer

//Compute the error signal between the output and hidden layer

//Update bias between the output and hidden

//Update bias between the hidden and input

//Determine the output neuron between input layer and hidden layer

//Determine the output neuron between hidden layer and output layer

In order to derive and evaluate the performance of the most appropriate model that fulfils our objective of optimizing the cash management, few metrics were used. The accuracy of the proposed ANNCFM is evaluated using MAPE and MSE which are defined as follows:

The data for a period of three years (2010-2012) was collected from City Union Bank (CUB)-ukt bank branch to simulate the network using MATLAB .For the proposed study the total number of data for the three years is 879, in which the first two and half years, 737 data were used for training(80%) and the remaining six months 142 data sets (20%) were used for testing. Studies found that input data normalization with certain criteria, prior to training process, is crucial to obtain good results, as well as to fasten significantly the calculations [J.Sola J. Sevilla]. Hence the input data was normalized before training.

In ANNCFM, 15 runs were made by varying the number of hidden neurons from 10 to 50 using gradient descent with momentum back-propagation (traingdm) for the default training parameters learning rate =0.01, momentum=0.95, Goal=0, and number of iterations as 6000, are illustrated in table 1-column2. 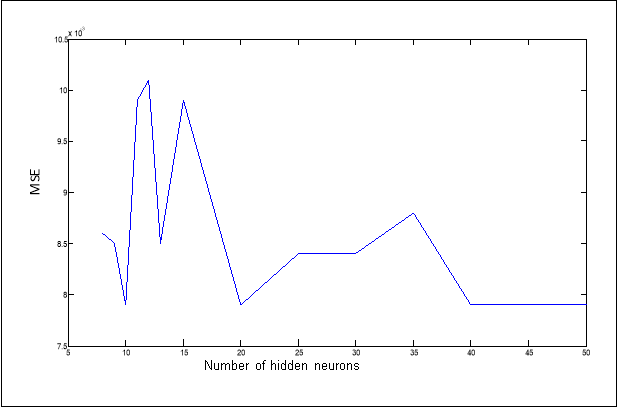 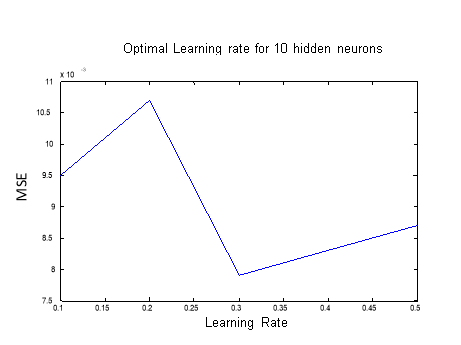 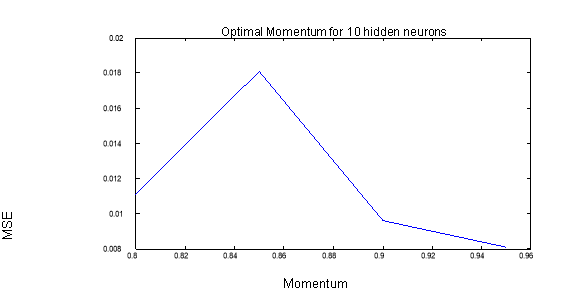 In the ANNCFM model to train and test the cash requirement for a day, week, month the following parameters values are selected based on their performance from the different number of runs made above: i) the number of input neurons=6, ii) maximum number of iteration=6000, iii) learning rate= 0.3, iv) momentum=0.95, v) transfer function=tansig/tansig (hidden and output layer). The optimal selection of the above parameters helped in improving the performance, by minimizing the error rate. This is evident from Table 1, that shows the MSE achieved before and after parameter selection.

The ANNCFM was used to estimate daily, weekly and monthly cash requirement. The estimated values were compared with the actual values for the testing period are shown in Fig.6a,b,c.for the daily ,weekly and monthly prediction. The obtained results shows the ANNCFM was found to perform reasonably good for all the three models .The weights calculated by our ANNCFM was found to be sufficient for cash prediction in which RY,MOY,WDOM, WDOW are essential parameters, and SDE,HDE are additional parameters .The connection weight approach was used to quantify the importance of input variable [20]. The preference of the input parameters were found based on the weights obtained was evident from Table 2, column-4.

The input parameters SDE and HDE plays a vital role in daily and weekly model as it was observed from the above table it effectively takes care the need of peak cash requirement at the beginning of every month and during holiday periods. The role of SDE in the weekly cash prediction could be easily understood for the weeks like 1,5,14, where the cash requirement is maximum since the beginning of the month lies within the week. However for the 9th and 10th as well as for the 18th and 19th week cash requirement shows the new month starts between the weeks. The monthly model was plotted for six months as shown in Fig.6c in which the experimental results shows that the estimated values were most influenced by WDOM .The cash required and predicted was minimum for the fourth month in which WDOM was minimum. The MAPE and MSE for ANNCFM are shown in Table 3 . 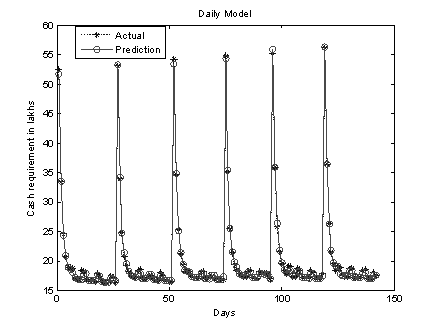 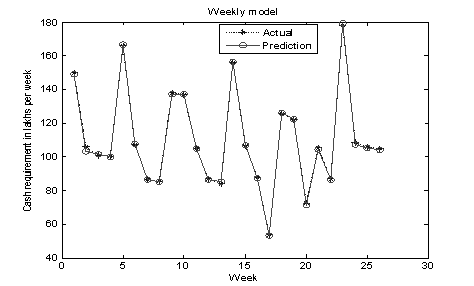 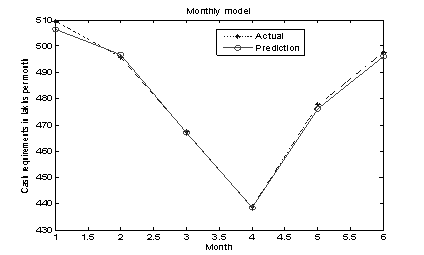 The comparison made between the actual and forecast data shown from the figures indicates that the six input variables selected in our model is sufficient to identify the cash need which is changing from time to time.

The observations from the experimental results of this study shows that ANNCFM is a useful tool to predict the cash requirement in emerging banking sector. ANNCFM using feed forward neural network training with back-propagation algorithm optimize the needs of cash on daily, weekly and monthly basis. In the implementation process the data set used for the years between 2010 and 2012 were trained and tested to measure the performance. The input parameters were initialized and different runs were made for the proposed model to find out the optimal number of hidden neurons as 10, momentum as 0.95 and learning rate as 0.3 to train and test the network using sigmoid transfer function. The estimated results were with minimal error for the better performance with an accuracy of 91.23%.