With the new paradigm of Service Oriented Computing, many enterprises attempt to utilize services as fundamental elements for developing applications/solutions as an additive layer on top of existing components. The Web Service Controller Architecture (WSCA) for service-based, enterprise-scaled business solutions provides exactly this flexibility. The design, exposure and management of services can be accomplished through a Service Oriented Architecture (SOA) that supports the usage, composition and coordination of services in a loosely coupled manner. Web services appear to be particularly suitable for addressing these aspects of a SOA. Furthermore, composition languages such as BPEL add value by composing Web services and facilitating the implementation of business processes. As the SOA paradigm brings this big behavior change relying on loose coupling of services it raises new questions in the area of change management. Change management is a central aspect in any software design, but its complexity for Web services is increased by both composition languages and loose coupling. The resulting advantages like composability, autonomy, message-based communication, and the avoidance of combined compilation and binding prove to be deficiencies in this context.

In this paper we discuss these elementary challenges of change management in the area of Web services (Web Service Change Management, WSCM). Currently there are no sound mechanisms and engineering principles for changing Web services and their related entities. Through analysis of a suitable scenario, specifically looking at the details of the Web service provider and consumer roles, one can identify the various problems that exist in this domain. Therefore we will start our approach with the consideration of an application scenario from the business domain of application and change management, the addition of Web services in private legal sector.

An Overview of a WSCA

A WSCA consists of several autonomous outsourced Web services, but acts as a virtually coherent entity. Business entities, in the form of Web services, are often geographically distributed and organizationally independent. While WSCA has a potential to introduce new business opportunities through dynamic alliances, the challenges of fully realizing a WSCA lie in managing changes during its lifecycle through Extreme X Machines (XXM).

In this paper we explore the design changes as made to software projects by the use of a formal model known as Extreme X-Machines (XXM) [5,6], which are based on the work of Eilenberg and Holcombe [7,8]. An XXM model describes the functionality of the software without defining exactly how this functionality is achieved. This perspective allows an analysis of functional change whilst excluding specific implementation or requirements issues.

XXM are a state based model, they are intended to be used by developers as a method to design their systems from at the top level but here, XXM are used as effectively to analyze and incorporate changes in, even addition of new web services. Each model typically consists of a set of states which correspond to screens in the final system and functions which link the screens together. The functions are typically labeled with an enabling action such as “click_ok” which corresponds to a user clicking the OK button.

•WSCA instance: A WSCA instance is a composition of a set of concrete services, which instantiates a WSCA schema. It actually delivers the functionality and performance of a WSCA.

The lifecycle of a WSCA is a series of stages through which it passes from its inception to its termination. There are four phases in a WSCA lifecycle: initiation, composition, service-orchestration and termination. The initiation phase is the first stage, where the WSCA is described at a high level. It is initiated when the owner of the WSCA establishes a need for a business objective [53].

To materialize the concept of WSCA, the WSCA must automatically adapt to its dynamic environment, i.e., to deal with changes during its lifetime. Because of the dynamic nature of Web service infrastructure, changes should be considered as the rule and managed in a structured and systematic way [52]. Changes may be introduced by the occurrence of new market interests, new business regulation, or underlying service availability. Such changes require a corresponding modification of the WSCA structure with respect to the functionality it provides and the performance it delivers.

Once a change occurs, a WSCA must react in a reasonable time and realign itself to deal with the change. This alignment must be performed in an automatic manner considering the frequent occurrence of the changes to a WSCA. By doing this, the WSCA can not only deal with unanticipated changes to the underlying services and infrastructure, but also maximize its market value, optimize functionality outsourcing, and maintain competitiveness.

The problem with the existing system of legal decision making process is that:

The need is to have an automated Legal System in India, at least at the private level. And this automation should be done with the most contemporary and best suited group of technologies. The problem uncovers the major issue of incapability of notification of changed Acts or Amendments to the related bodies.

The user in need of a legal solution makes use of the web service WS_PublicInterface and submits his, here accused, details and the details of the FIR filed by the complainant and forwards the FIR details like Case Crime No, Name, crime, date etc., to the WSCA which allots a Lawyer for the case with the help of WS_AdvocatesAssociation. An interested user (may be lawyer or a normal user) can find the details of the judgments through the WS_Judgments service. When a judgment is made the WS_Judgment web service provides the user with the copy of the order of the judgment.

When these services are combined together as a WSCA, the WSCA will invoke the services on behalf of the user. There may potentially be some dependency relationship between them. These dependencies determine the composition of the services. In the case of the LegalCosmos WSCA,

users do not necessarily need to provide the information for each service. The input of some services can be derived from the dependency relationship. Like in WS_AdvocateAssociation selected advocate details are directly passed to the WS-Judgments. 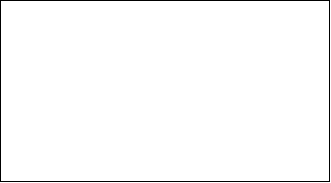 Definition: FSMis a mathematical model of computation used to design both computer programs and sequential logic circuits. It is conceived as an abstract machine that can be in one of a finite number of states. The machine is in only one state at a time; the state it is in at any given time is called the current state. It can change from one state to another when initiated by a triggering event or condition; this is called atransition. A particular FSM is defined by a list of its states, and the triggering condition for each transition. 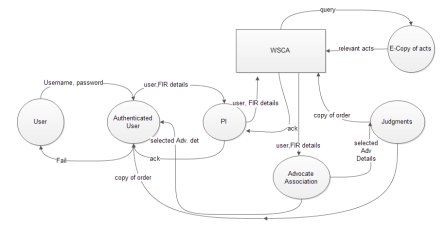 The change management in the proposed LegalCosmos WSCA primarily deals with the change in Acts in the form of Amendments. This change origins from the addition of two web services provided by the “Union of India” that produces amendments at the central level and the “State Acts” that produces amendments at the State level. Since these changes are initiated by the outsourced service providers and incorporate an alteration in web service. They form the part of bottom up changes.

In our work, we assume that activation changes occur asynchronously. For instance, the WS_PublicInterface service may not change its data types while the activation change of unavailability is being managed. Another assumption we make is that the service is associated with a set of states. We associate each change with a transition between two states: precondition and postcondition. 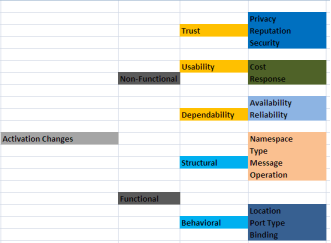 Non-functional changes represent the dependability, usability, and trust associated with a member service. This information may be stored by a third party, the WSCA, or member services. We assume the information is stored as attributes that are maintained by an independent third party service provider. Changes to the trustworthiness of a Web service relate to the security, reputation, and privacy of a Web service. Changes in usability are dependent on the responsiveness and service cost. Finally, changes to dependability are associated with the availability and reliability of the Web service. Changes to service dependability are binary, because they represent two distinct states. For example, a service may either be available or unavailable. Alternatively, changes to service trust and usability are non-binary. For

instance, service cost may assume more than two values during a member service’s lifetime. Therefore, we assume that a threshold is set and maintained by the WSCA. This threshold declares the minimum and maximum intervals of a value accepted by the WSCA. For example, the WSCA has the threshold of minimum $5 and maximum $10 for any judgment service cost. Every time a change occurs to the cost of a member judgment service, it is compared with the threshold. Only if the change exceeds the threshold, we consider that a triggering change has occurred. Note that the changes we have defined, such as changes to availability, are applicable to member services only. Once a member service is replaced, it is no longer part of the change management mechanism. For example, the e-Acts member service EA1 may become unavailable, and prompt the WSCA LegalCosmos to select an alternate e-Acts service EA2. After some time, EA1 may become available. However, since it is no longer a part of the LegalCosmos LCS, the LegalCosmos WSCA does not manage the change in EA1. Table 6.1.1.1 summarizes the non-functional changes in Web services.

XXM for Existing LegalCosmos WSCA, when Functional Changes are not introduced (before the removal of e-Acts web service)

XXM for WSCA when Functional Changes are introduced (after the removal of e-Acts web service and addition of two new web services, WS_UnionOfIndia and WS_StateActs)

A Mapping specifies how changes in one layer correspond to changes in another layer [86]. These mappings must remain consistent in the presence of frequent changes. When a change occurs at the service level, the business layer must react to manage the changes. Triggering changes have a reactive

impact on the business layer of the WSCA.

Our approach of mapping changes is based on mapping rules. These rules are based on the activation changes and their corresponding business level changes of WSCA. Some changes may have more than one rule associated with them. The rules are depicted in the matrix shown below:

4: for all each Web Service WSi in WSCA concrete service list do

6: if not alive then