Unexpected Halide Transfer: Complex Reorganisation Between Aluminium and the Lanthanoids.

(LINE INCLUDED FOR SPACING ONLY – DO NOT DELETE THIS TEXT)

Isolation of homoleptic ionic trivalent lanthanoid complexes, under non aqueous conditions, has been investigated using nitrogen based ligand systems 1-5. The interest surrounding these homoleptic complexes is attributed to their potential catalytic properties 3,5. Under non aqueous conditions, the use of highly labile ligands, such as solvent molecules, presents the possibility of exposing the metal centre, hence providing a site for catalysis and thus can be considered to be ‘near naked’ 3. Complexes involving Ln3+ ions, that can be considered ‘near naked’ have to date been restricted to complexes such as [Ln(MeCN)n]3+ , with anions such as AsF6– and AlCl4– 3-5.

With this in mind, we have investigated the ability to access homoleptic ‘near naked’ Ln3+ complexes with tetrahydrofuran (thf) ligands. Currently, no such complexes have been reported for the smaller trivalent species unlike the larger divalent species, for which there is precedent viz. [Sm(thf)7][BPh4]2 6. Exploitation of the coordination abilities of crown ether has been investigated with the isolation of [ScCl2(18-crown-6)][FeCl4]. Via Sc n.m.r it has been shown that [ScCl(thf)(18-crown-6)][FeCl4]2 and then subsequently [Sc(thf)2(18-crown-6)][FeCl4]3 can be synthesised even though it has not been structurally characterised. With this in mind it should therefore be possible to isolate similar adducts in MeCN.

Homoleptic acetonitrile Ln3+ complexes can be obtained via two pathways viz equations 1 and 2 3. It was our intention to extend this chemistry to involve homoleptic Ln3+ complexes with ether ligands in place of MeCN. In reactions analogous to equations 1 and 2 with thf in place of MeCN, we found to our surprise [LnCl3(thf)2]n (Ln = Pr, Nd) was the sole Ln complex isolatable. This suggests that the complex is formed by a concerted process whereby AlCl4– binds to Ln3+ releasing AlCl3, allowing binding of another AlCl4– and so on until complete halide transfer to Ln3+ occurs yielding LnCl3(thf)n (equations 3, 4). Similarly, addition of 18-crown-6 to [Pr(MeCN)9][AlCl4]3 resulted in reorganisation to [(PrCl(ï­–Cl)(18-crown-6))2][AlCl4]2.2(MeCN) (1) †.

This change in coordination environment of the lanthanoid metal establishes the pathway to halide transfer involving a transient species related to that shown in Figure 1. Structural motifs similar to this have been observed for several lanthanoid complexes including [Sm(Î®6-C6Me6)(AlCl4)3] .toluene 9,10. The reaction is completed by the substitution of MeCN by the crown ether and cleavage of the bridging Al–Cl bonds in a similar fashion to that observed for reactions involving thf.

Complex 1 has a nine coordinate Pr centre that is bound to all six oxygens of the crown ether. The Pr is also bound to one terminal and a bridging chloride, and dimerises through an inversion centre. There is a distinct change in bond lengths between the terminal (Pr-Clter 2.715(2)Å) and bridging chlorides (Pr-Clbr 2.839(2) and 2.858(2)Å) as would be expected with similar changes identified in [PrCl(ï­-Cl)(tetraethyleneglycol)]2 11. The distances for Pr-Ocrown range from 2.572(4) – 2.590(7)Å, following the same trends in the related cation [(DyCl(ï­–Cl)(dibenzo18-crown-6))2][(DyCl3(ï­–Cl)(MeCN))2] 12, albeit with a lengthening of Ln-O in line with increased ionic radius between Dy and Pr.

All reactions were carried out under dry nitrogen using dry box and standard Schlenk techniques. Solvents were dried by distillation from sodium wire/benzophenone (thf) or CaH/P2O5 (MeCN). IR and far IR data were obtained as described previously 15. Metal analyses were carried out by complexiometric EDTA titration with the addition of 5% sulphosalicylic acid to mask Al 16. Anhydrous AlCl3, LnCl3, and 18-crown-6 were supplied by Sigma Aldrich. AlCl3 was freshly sublimed prior to use. Conductivity measurements were carried out on a Crison Conductimeter 522 (serial no; 3807), using a locally manufactured air-sensitive cell. The complex [Pr(MeCN)9] [AlCl4]3 was made using previous published methods 3 and conductivity measurements were carried out as mentioned above (367.97 S cm2 mol-1 1.097 x 10-3 mol dm-3, MeCN). 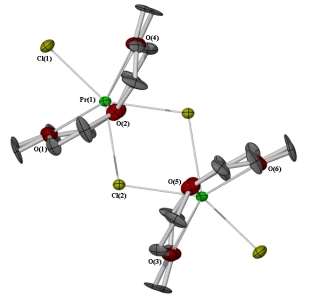