In order to improve the dispersion of phosphonium vermiculites (OVMT) in polymethylmethacrylate (PMMA), the ultraphonic in situ polymerization method was introduced, and a series of OVMT-PMMA (PBTP) nanocomposites were successfully prepared. The results indicated that the assistance of ultraphonic could increase the interfacial interactions between OVMT and PMMA, thus the particles of OVMT dispersed better in the PMMA matrix with a highly exfoliated structure. In addition, the obtained PBTP nanocomposites showed better mechanical properties than those prepared without ultraphonic, suggesting the great potential of ultraphonic in situ polymerization in the synthesis of polymer/clay nanocomposites.

In the past decades, polymer/clay nanocomposites have attracted much attention of chemists [1-3], because the additions of these layered silicates exhibited significant improvements in mechanical and thermal properties of polymers with very low amount of loading [4,5]. Until now, three main methods have been considered for the synthesis of polymer/clay composites: melt blending, solvent exfoliation and in situ polymerization [6]. Compared with other methods,in situ polymerization is more efï¬cient and environmentally friendly [7]. Nevertheless, the dispersed efficiency of clay in polymer matrix is unsatisfactory, leading to limited improvements in the properties of polymers. Thus, it is necessary to modify the surfaces of pristine clays and introduce other synthesis methods, which can overcome the shortcomings [8]. In this paper, we reported a highly effective synthesis method of phosphonium vermiculites/polymethylmethacrylate (PBTP) nanocomposites by ultraphonic in situ polymerization. Then, the excellent dispersion of the phosphonium vermiculites (OVMT) in polymethylmethacrylate (PMMA) was displayed, and the resulting effects on the properties of PBPT nanocomposites were also demonstrated.

60 g VMT was dispersed in 300 ml deionized water, to which 120 mmol BTP was slowly added. Then the mixture was stirred vigorously at 80 ºC for 10 h. The resulting product was washed with deionized water for three times. After dried at 80 ºC under vacuum and gathered with 300 mesh sieve, the OVMT were obtained.

1 wt.%, 3 wt.% and 5 wt.% OVMT were respectively dispersed in methyl methacrylate with 0.2 wt.% of AIBN. After stirred at 25 °C for 0.5 h, the suspension was polymerized in a water bath at 80 °C for 2 h with the help of ultraphonic. Then, the suspension was followed with post polymerization at 35 °C for 20 h and at 105 °C for at least 2 h orderly to get PBTP nanocomposites. The resulting PBTP nanocomposites were designated as PBTP-S1, PBTP-S2 and PBTP-S3, respectively. For comparison, the PBTP nanocomposites prepared without ultraphonic were designated as PBTP-1, PBTP-2 and PBTP-3, respectively.

In the FTIR spectrum of VMT (Figure 1a), the broad band near 3620 cm-1 was due to -OH stretching mode of interlayer water, while the absorption peak in the region of 1662 cm-1 was attributed to -OH bending mode of adsorbed water. The bands at 1030 and 460 cm-1 were attributed to stretching vibration and bending vibration of Si-O, respectively. In the FTIR spectrsum of OVMT (Figure 1b), compared with that of VMT (Figure 1a), two new peaks at 2925 and 2854 cm-1 appeared, which were ascribed to the asymmetric and symmetric vibration of methylene groups (CH2)n in the aliphatic chain [9]. Therefore, the existence of BTP in OVMT was proved, and the OVMT was successfully prepared. 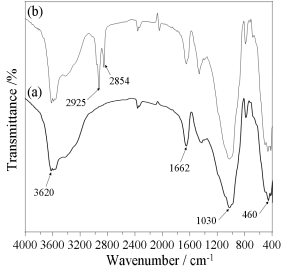 In Figure 2a and 2b, the (001) planes of VMT and OVMT were observed at 2θ = 7.44º and 2θ = 5.87º, corresponding to the d-spacings of 1.19 nm and 1.50 nm, respectively, which indicated that the galleries of the silicate layers in VMT had been expanded for about 0.31 nm by the intercalation of BTP. Thus, successful preparation of OVMT was proved again [10]. XRD patterns of PBTPs were shown in Figure 2c-h. It was found that the diffraction peak intensities of PBTPs prepared with ultraphonic in situ polymerization were less than those of PBTPs prepared without ultraphonic in situ polymerization, indicating lower degree of crystallinity. To our surprise, the PBTP-S1 even did not exhibit any diffraction peak, indicating the extensive layer separation associated with the altitudinal delamination of OVMT silicate layers in the PMMA matrix, which resulted in the total exfoliation of the clays [3,5]. So, these results showed the PBTPs prepared with ultraphonic in situ polymerization had better dispersion of OVMT in PMMA than those prepared without ultraphonic in situ polymerization. In addition, the 2θ value increased in the PBTPs matrix with the increase of OVMT content, indicating the increase of OVMT content would lead to a bad compatibility of OVMT with the PMMA matrix. 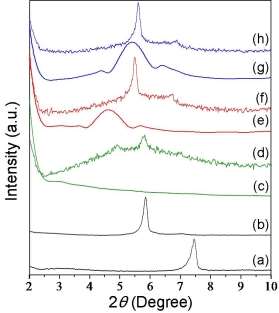 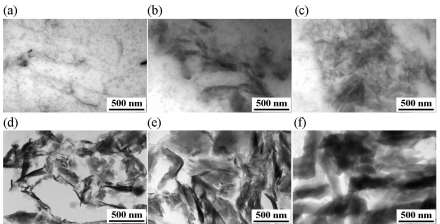 Then, the mechanical properties of samples were tested (Table 1). Compared with those of the pure PMMA, the modulus and the elongation of the PBTPs were increased with the increasing of the clays, whatever they were prepared with or without ultraphonic in situ polymerization. The tensile strengths of PBTPs prepared with ultraphonic in situ polymerization showed obvious improvement, and when the additions of OVMT were 1 wt% and 3 wt%, they increased about 10.7 % and 16.1 %, respectively. The enhancements were mainly attributed to the homogeneous dispersion and strong interfacial interactions of OVMT in the polymer matrix, and high exfoliation of the silicate layers in the PMMA matrix, which provided high resistance against the plastic deformation. However, the tensile strengths were decreased with the increasing of the clays when PBTPs were prepared without ultraphonic in situ polymerization, which indicated clays gathered and had poor dispersion in polymer matrix.