Pt and Rh were loaded on protonated layered pervoskite H1.9K0.3La0.5Bi0.1Ta2O7 by an in suit photodeposition method. The Rh loading facilitates the O2 evolution and the H2/O2 is close to stoichiometric ratio (≈ 2). Yet the Pt loading is unable to improve the O2 evolution, although the photocatalytic activity for H2 evolution was enhanced apparently. The different effect of Pt and Rh on phtocatalytic activity for H2 or O2 evolution is due to the chemical states of Pt and Rh on HKLBT. The Pt particles loaded on HKLBT by photodepositon are Pt0, functioning as activity sites for H2 evolution. However, the Rh particles loaded on HKLBT are not only Rh0, but also RhO2, which provide the activity sites for O2 evolution by means of reducing the overpotential of O2 evolution.

Photocatalytic water splitting has attracted much attention in the past decades for producing clean and renewable hydrogen energy[1-3]. The photocatalytic water splitting contains both water reduction process(for H2) and water oxidation(for O2) process. Currently, the water oxidation process is consider as a key bottleneck in photocatalytic reaction[4]. The difficulty of water oxidation is due to the high overpotential of O2 evolution, which is attributed to charge trapping by surface states and slow oxygen evolution kinetics[5-7]. This is also explaining why some photocatalytic reactions in pure water only produce H2 without O2 (or H2/O2>2). Therefore, providing the activity sites for oxygen evolution to reduce the overprotential is a key task on overall water splitting. It has reported that co-catalysts such as NiO[8], RuO2[9], Mn2O3[10] loading on photocatalysts play an very important role on achieving overall water splitting by mean of providing the activity sites or inhibiting the occurrence of backward reaction. However, almost all of metal oxides loading on photocatalytic materials need heat-treatment, which is harmful to some materials with less heat-resistant, such as protonated layered materials[11], metal (oxy)sulfide[12] and metal (oxy)nitride[13], etc. Recently, Kudo et al[14] loaded PbO2 from Pb2+ by a photodeposition method without heat-treatment, indicating that oxides also are loaded by oxidation of photogenerated holes, which will provide us with a feasible way to load metal oxides on photocataytic materials by a photodeposition method.

In our previous study, we found that, although protonated layered perovskite H1.9K0.3La0.5Bi0.1Ta2O7 showed high activity for overall water splitting, the ratio of H2/O2 was stoichiometric[15,16]. In addition, H1.9K0.3La0.5Bi0.1Ta2O7 (HKLBT) possesses weak heat endurance and the heat-treatment would result the collapse of layer structure. Herein, we report Rh oxide loading on HKLBT by in suit photodepositon to provide the activity sites for Oxygen evolution and enhance photocatalytic water splitting. The chemical sates of Pt, Rh loading on HKLBT are investigated. The effects of co-catalysts on water splitting, especially for oxygen evolution, are also discussed.

The protonated layered perovskite oxides H1.9K0.3La0.5Bi0.1Ta2O7was prepared according to the method presented in our previous papers[15]. The detail processes are as follows:

(1)The layered compound K0.5La0.5Bi2Ta2O9 were prepared by the polymerized complex method as follows. 60 mL methanol was used as a solvent to dissolve 0.006 mol of TaCl5. A large excess of citric acid (CA, 0.09 mol) was added into the methanol solution with continuous stirring. After achieving complete dissolution, 0.006 mol Bi(NO3)3·5H2O, 0.0015 mol La(NO3)3·nH2O, and 0.00825 mol K2CO3 were added to the solution. The mixture was then magnetically stirred for 1 h to afford a transparent solution and 0.36 mol of ethylene glycol (EG) was added to this solution. Then, the solution was heated at 130 ºC to promote esterification between EG and CA, yielding brown resin. The resin was then calcined at 350 oC for 1 h to form black solid mass. The resulting black powder was calcined on an Al2O3 plate at 650 ºC for 2 h in air, then calcined at 900 ºC for 6 h to obtain K0.5La0.5Bi2Ta2O9 (denoted as KLBT).

(2) Proton exchange reaction: KLBT (0.8g) was performed in 250 mL of 3 M HCl solution for 72 h at room temperature with replacement of the acid every 24 h, and then the product was washed with deionized water and dried at 60 ºC for 3 h to remove the water on the surface of potocatalysts to obtain HKLBT.

The UV-vis diffuse reflection spectra (DRS) were determined by a UV-vis spectrophotometer UV-2450 (Shimadzu, Japan) and were converted to absorbance by the Kulbelka-Munk method. The transmission electron microscopy (TEM) measurements were conducted using a JEM-2100F (Japan). The surface electronic state was analyzed by X-ray photoelectron spectroscopy (XPS, Shimadzu-Kratos, Axis Ultra DLD, Japan). All the binding energy (BE) values were calibrated by using the standard BE value of contaminant carbon (C1s =284.6 eV) as a reference.

The in suit photodeposition and photocatalytic reactions were carried out in a 350 ml top irradiation reaction Quartz cell at room temperature and a 250 W high-press Hg lamp was used as the light source. The catalyst powder (50 mg) was suspended in 60 ml aqueous solution containing a certain amount of (NH3)4PtCl2 and Rh(NO3)2 solution by magnetic stirring. At initial stage (about 2 h), Pt or Rh species were gradually deposited on the surface of HKLBT. After 2 h, generated gases were analyzed by an on-line GC with TCD detector (Huaai, GC9160, China, MS-5A, Argon as carrier gas).

The UV-vis diffuse reflection spectra (DRS) of naked HKLBT and Pt (Rh)/HKLBT photocatalyts are shown in Fig 1. The absorption edges of HKLBT loading Pt or Rh have no notable change. However, after in suit photodeposition, the spectrum longer than 320nm exhibit new weak absorptions, which are ascribe to the adsorption of Pt or Rh(oxides) on the surface of HKLBT. The result indicates co-catalysts loaded on photocatalyst successfully as well.

The representative HRTEM images of Rh/HKLBT and Pt/HKLBT are shown in Fig 2. Fig 2a shows that the size of the Rh on HKLBT is about 5-10 nm. The lattice fringes of Rh and HKLBT can be observed clearly, suggesting the well-defined crystal structure. The lattice fringes with d spacing of ca. 0.251 nm and 0.184 nm can be assigned to the (101) lattice plane of RhO2 and (002) lattice plane of Rh0, respectively. The result indicated that Rh particles photodeposited on HKLBT contain two different Rh species. The fig 2b shows the lattice fringe with d value of ca. 0.197 nm corresponds to the (200) lattice plane of Pt0, suggesting that Pt2+ was photo-reduced to Pt metal by photogenerated electrons instead of being oxideted by holes.

The chemical states of Rh and Pt species on HKLBT photocatalysts were investigated by the XPS. Fig 3 shows the Rh 3d (a) and Pt 4f (b) binding energy spectra of Pt/HKLBT and Rh/HKLBT. As shown in Fig 3a, the Rh 3d5/2 XPS spectrum displays broad peaks and has been fitted to two overlapped peaks at ca 307.2 eV and 309.2 eV. The low binding energy at 307.2 eV is attributed to the Rh0[17], and the high binding energy at 309.2 eV is ascribed to RhO2[18], demonstrating further Rh photodeposited on HKLBT possesses two chemical states. The result is good agreement with the HRTEM result. The spectrum for the Pt7/2 (Fig 3b) exhibits two major peaks with binding energies of ca. 70.8 and 72.3 eV, which are assigned to Pt0 and Pt0 with adsorbed oxygen(Pt0-Oads) based on the previous report by kimi et al[19].

Table 1 lists the rates of H2 and O2 on HKLBT loaded with different amounts of Pt-cocatalyst and Rh-catalyst by photodepositon method. As shown in table1, the photocataytic activity of HKLBT was improved by Pt or Rh loading. The highest hydrogen evolution rate was obtained when the amount of cocatalytsts was 0.3wt%, which reached the 2.0 times (Pt) and 1.2 times(Rh) of naked photocatalyst, indicating cocatalysts provide catalytic active sites for water splitting. Excess loading of cocatalysts caused a decrease of photocatalytic activityï¼Œbecause the excessive Pt or Rh loaded on HKLBT would not only block the absorption to light photon but become the recombination centers of carriers as well[20]. Moreover, it is noteworthy that Pt loading enhanced remarkably the photocatalytic activity of H2 evolution instead of O2 evolution, and the H2/O2 is also deviating from the stoichiometric ratio. Instead, the photocataytic O2 production is considerably promoted by Rh loading and the ratio of H2 to O2 is close to 2, when the amount of Rh loading is 0.3 wt%.

The Rh oxide (RhO2) was loaded on HKBT by in suit photodeposition method without heat-treatment. Compared to Pt, the Rh oxide on the surface of the HKLBT is able to enhance the photocatalytic O2 evolution, and the ratio of H2 to O2 is stoichiometric ratio (H2/O2=2). The enhancement of O2 is due to the decrease of overpotential of O2 evolution by means of RhO2. The present work is also providing a possibility without heat-treatment to load metal oxides on photocatalyst with low heat stability for overall water splitting. 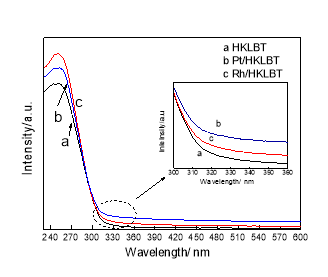 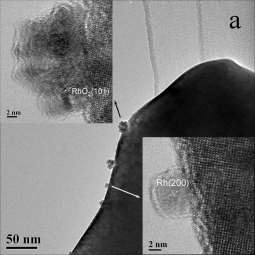 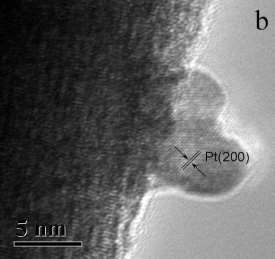 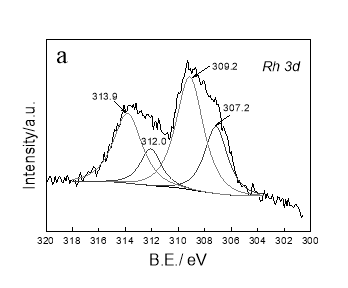 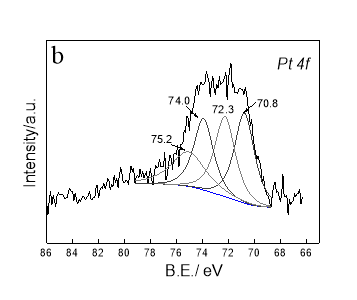 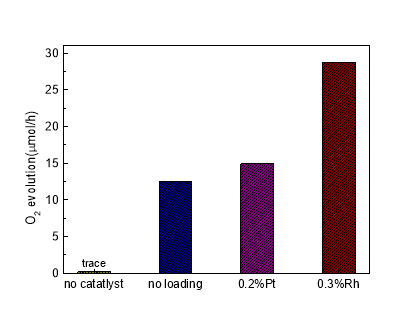