Digital images are images which are formed of picture elements also termed as pixels. The pixels typically are arranged in a rectangular array. The dimensions of the pixel array determine its size. Its width is defined by the number of columns, and height by the number of rows in that array. Digital images are susceptible to various types of noise.Speckleis a form of noise which exists in and decreases the quality of the active radar and synthetic aperture radar (SAR) images.

Image denoising is an essential task in image processing, both as a component in other processes and as a process itself. Various methods are there to denoise the image. A good image denoising model preserves edges, while removing noise. If the window size is quite large, then the over smoothing will occur and edges become blur out. If the size of window is small, then the smoothing property of the window decreases and doesn’t remove the speckle noise that efficiently. Secondly, in the traditional filters there is no enhancement of edges. Thirdly these existing filters are non directional. Finally, the thresholds which are used in the existing filters, although are inspired by statistical arguments, they are ad hoc improvements which only display the drawbacks of the window-based approach.

So, inorder to alleviate this problem, hybrid filter with Wavelet denoising and anisotropic diffusion filter, has been proposed. In this model, we work on the drawbacks of the previous models such as oversmoothing of the images and unnecessaryremoval of the edges.

The scope of work for this model is finding an accurate technique for the development of a hybrid despeckling model whose main purpose is to preserve the edges of the image and avoid oversmoothing during denoising. We have to study various previous techniques and on the basis of the study we will develop a model which overcomes the flaws of existing despeckling methods while improving the quality parameters in the end of filtering process.

Until now, several researches and case studies have been reported about wavelet denoising .

Yuan Gao and Zhengyao Bai [2] proposed a speckle reduction method which is based on curvelet domain in SAR images. In this technique, curvelet transform is mapped with wavelet filtering. In the first step, multiplicative noise is converted in to additive noise. Second step is to compute the threshold, by using soft and hard thresholding curvelet coefficients are thresholded. Lastly, opposite CT and exponential transform are applied to reconstruct the original image. This shows that this method is better than other filtering techniques.

S.Sudha et al. [3] proposed a tool for noise removal in ultrasound images. The comparison shows that the proposed technique provides better results than other existing techniques.

Manish Goyal and Gianetan Singh Sekhon [4] applied wavelet based hybrid thresholding techniques: firstly applied the statistical technique and then filtering based on bayes threshold. Then results are calculated which is followed by applying soft thresholding. The experimental results show that this filter gives better results.

Alka Vishwa, Shilpa Sharma [5] created a simple context-based model for the selection of threshold within a wavelet denoising model. Estimations of the local variance with appropriate weights are used for thresholding. Although, it is seen that the denoised image, during removal of a substantial amount of noise also suffers practically node gradation in the sharpness and details. The experimental result shows that this proposed method yields significantly improved visual quality and also better PSNR in comparison with the other techniques for the denoising.

Rohit Verma,Jahid Ali [6] has discussed different types of noise that can creep in image during acquisition. In the second section various filtering techniques are presented that can be used for denoising the digital image. Experimental results found that the BM3D along with median filters gave better results and the averaging and minimum filters performed the worst. BM3D is best choice of removing Salt and pepper noise. In all other cases median filter is considered more suitable.

Adib Akl and Charles Yaacoub [9] proposed a method for image denoising that uses wavelet denoising and an adaptive form of the Kuan filter that results in a significant removal of speckle noise. The results are tested in respect of the peak signal to noise ratio, equivalent no of looks and coefficient of correlation.

Udomhunskal and Wongsita [10] presented a method for Ultrasonicspeckledenoisingusingthe hybrid technique which is based on wavelet transform and wiener filter to reduce thespecklenoisewhile preserving the details. In this method, firstly apply the 2D discrete wavelet transform for the noisy image. Then, the wiener filter isapplied to each detail subband. The results found that this method removes the ultrasonicspeckle more efficiently.

The basic idea of this model is the estimation of the uncorrupted image from the noisy image or distorted image known as “image denoising”. To remove noisy distortions, there are various methods to help restore an image. Choosing the best method plays a very important role for getting the desired image. There are various existing techniques to remove the Speckle Noise Reduction but due to some drawbacks these techniques cannot remove Speckle Noise efficiently. The major drawbacks of the existing filters are:

So, to overcome these limitations we proposed a new hybrid technique that combines Wavelet based denoising and anisotropic diffusion filter. As Wavelet is Frame based Approach, it does not dependent on Space or Time. Wavelet also provides better Resolution. In Anisotropic diffusion filter, it is based on partial differential equation. It does not depends upon the window size but, on Mean Square Error approach. So it provides better filtering capability and enhances the edges. By applying these techniques the efficiency of the system is increased and noise is reduced to the greater extent.

A speckled image can be expressed in the form of

Where m is the original image and the n is noise with mean and unknown variance. The following diagram explains the DWT-denoising.Wavelet-based denoising consists of:

Theimage k is inserted in the filter in the logarithmic form i.e. k=m+n. After wavelet transform W is applied, it results in W(k). W(k) undergoes the thresholding process which results in T(W(k)) which is represented asfwin the figure 1.Finally, the de-speckled image is extracted using the inverse transform W-1.

Here I is input image,

is the initial image, div (F) is diffusion flux and

First load the image using a MATLAB processing tool box and add speckle noise into in the image which can be seen in the form black and white dots. After image is loaded it will pass through wavelet denoising filter where log transformation is applied so as to decrease the multiplicative nature of the image by making it additive for easing the removal process.Here Bayes Shrink Threshold is used for thresholding process. The Bayesian Shrinkage contains a soft-threshold and minimizes the Bayesian risk. Shrink threshold is calculated by considering a Generalized Gaussian Distribution. After that an Inverse wavelet transform will be applied on the threshold output, so as to extract the image. After applying the Wavelet Transform, hybrid of the anisotropic filter and wavelet will be formed, sothat it provides better results than simple Wavelet denoising techniques. After the image passes through the filter, results will be evaluated in terms of peak signal to noise ratio, Coefficient of correlation and equivalent No of looks. These results will show that the hybrid model gives better results than other existing techniques. 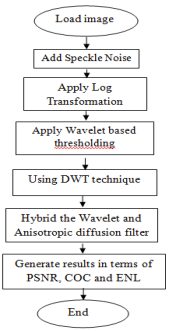 The various hardware and software facilities of the proposed model are given as under :