From the very beginning biologist marvelled at cellular complexities that are found in nature, and were awe struck by the very nature of genetic information that was present within each living cell. Hence they began understanding the mechanism by which the cellular machinery would regulate and manipulate this genetic information at a molecular level [1]. With the aid of some cutting edge technology, X-ray crystallography, along with NMR and many other physical and chemical methods major breakthroughs were made in the late 1970 in studying protein-DNA interactions. The first X-ray crystallographic study of a protein–DNAcomplex was reported in 1984, by the end of the 20th century 240 structures were documented and the number has exploded ever since [2]. Protein–DNAcomplexs were grouped in classes like polymerases, transcription factors, nucleases and other enzymes and structural proteins based on their functions [3]. Zinc finger was one such protein-DNAcomplex which was initially discovered in the transcription factor TFIIIA from Xenopus oocytes [3]. The ZNF domain is found abundantly in eukaryotes (in Humans alone 300 and 700 human genes encode zinc finger-containing proteins (nearly 1% of the human genome), practically absent in bacteria with some exceptions as in plant pathogens, scarcely in archaea and their viruses. [3] 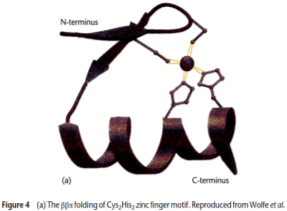 It was rather unusual to have found a ninefold repeating pattern of amino acids sequence in Transcriptional Factor IIIA. This ninefold pattern consisted of conserved cysteine, histidine, and hydrophobic residues which were arranged in fashion:

hydrophobic residues and His Histidine [1]. With this observation it was proposed that the classical ZNF motif would consists of a short of 30amino acid residue motif, that would form an independent, DNA binding minidomain folded around a central zinc ion with tetrahedral arrangements of cysteine and histidine metal legends. These proposals were then confirmed by EXAFS (Extended x-ray absorption fine structure) analysis [1]. The zinc finger proteins typically contain several fingers that make contacts with the DNA and each finger folds into a compact

The C2H2 type zinc fingers are the most commonly DNA-binding motifs found in humans and genomes of most multicellular organisms. Its motif are made up of 23-26 residue consensus sequence that contain two conserved cysteine (C) and two conserved histidine (H) residues, whose side chains are bound to Zn2+ ion on the other hand the C4 type zinc finger is found in approximately 50 human transcriptional factors has 4cysteine residues that bind to the zinc ion [4].

helix of the zinc finger interacts with the DNA. The first x ray crystal structure that served as a prototype of the zinc finger family was Zif 268, a 90 amino acid portion of a mouse transcription factor. This protein comprises three zinc fingers where one side of the helix is inserted into the DNAmajor groove at an angle of 45

with respect to the base-pair plain and binding of the successive fingers causes the protein to wrap around DNA [5]. The contact to the primary DNA strand (5’-GCGTGGGCGT-3’) is made through the

helix of the protein and the residue 2 binds to complimentary 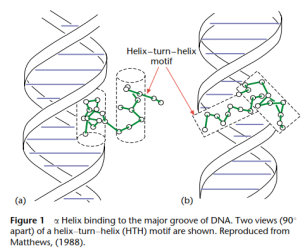 strand. Although these contacts mainly occur due to hydrogen bonds, van der Waals interactions and phosphate contact also contribute to the latter [5].

Zinc fingers domain containing proteins are “Wonder Molecules” as they perform some extraordinarily diverse functions in cellular processes such as DNA recognition, RNA packaging, transcriptional activation, regulation of apoptosis and metabolism, protein folding and assembly, and lipid binding [6,7]. Proteins from GATA-1 family found across a wide range of species from fungi to humans, play a role in regulating transcription with the help of four conserved cysteine residues and the ability to recognize the GATA DNA base sequence [1], yeast RNA polymerase II having six zinc-binding proteins also helps regulate transcription [7]. The Arf-GAP (ADP-ribosylation factor GTPase-activating proteins) has a GATA type zinc binding motif that helps it to regulate membrane trafficking and to mediate binding to phosphoinositides along with the pleckstrin homology (PH) domain [7]. The retroviral nucleocapsid (NC) protein from HIV-1 having 2 zinc ‘knuckles’ plays a major role in the recognition and packaging of the retroviral genome. The Fpg protein of Escherichia coli weighs 30.2 kDa and has C2H2zinc finger motifs. It shows DNA glycosylase, abasic site nicking, and deoxyribose excising activities and serves as a DNA repair enzyme by excising a variety of modified bases in the DNA [8]. Arabidopsis thaliana LSD1 (AtLSD1) contains three LSD1-type zinc finger motifs, which are involved in the protein–protein interaction. LSD1 plays a major role in negative regulation of plant programmed cell death (PCD) [9]. Zinc fingers are also known to regulate resistance mechanism for various biotic and abiotic stresses conditions plants (rice, wheat, tobacco, sunflower, tomato, barley, flax, and potato) faces, and being actively involved in their development and growth [10]. In recent years genome engineering in model organism such as Drosophila melanogaster,Arabidopsis thaliana, zebrafish and rats have been carried out using the application of the same core technology ie targeted genome cleavage by engineered, sequence-specific zinc finger nucleases followed by gene modification during subsequent repair [11].Soybean GmPHD-Type transcription regulators which contain zinc finger motifs improved drought, salt, cold tolerance and ABA treatments in transgenic Arabidopsis Plants [12]. A broader range of approaches will be available in the future as we uncover more of nature’s secrets to tackle the experimental challenges that limit us, zinc fingers will play a key role and stand as strong contenders in world of molecular editing.