Scientists continuously research to better understand the human stages of development and progression of diseases. Due to the complexity and ethical concerns of testing with humans, scientists instead utilize model organisms such as Danio rerio (zebrafish) in their research. Gaining understanding of processes in these less complex organisms allows for better application and comprehension in more complex organisms. Therefore, I will discuss why zebrafish are a great model organism, how to conduct a zebrafish genetic screen, and how screening zebrafish has helped in understanding the human disease GNE Myopathy.

Zebrafish are deemed model organisms for several reasons. First and foremost, zebrafish are vertebrates and therefore have similar developmental processes found in other vertebrates (Gilbert, 2014). Also, zebrafish can be genetically modified (Gilbert, 272). In regards to their presence in labs, zebrafish are useful and easy to care for subjects, as they are able to produce a large amount of offspring, reproduce all year long, and are easy to keep alive. Overall, mutants can be easily found and “propagated in the laboratory” (Gilbert, 2014, p. 271). What sets zebrafish apart from other model organisms are their characteristic transparent embryos that develop externally from the mother (Gilbert, 2014, p. 271). Furthermore, these embryos develop rapidly (Gilbert, p. 271). These qualities allow scientists to be able to view development clearly and in a short time frame.

Forward genetic analysis is described by Duncan et al. (2012) as “the concept of identifying gene function from mutants with a discernable phenotype” (p. 1). This process can be performed with model organisms with the goal of applying the results to more complex organisms. A zebrafish genetic screen has several steps and here is the following technique.

First, a group of male fish is exposed to a chemical mutagen that will cause mutations within the germ lines (Gilbert, 2014). In Pierce’s genetic screen using zebrafish, the chemical ethylmethytlsulfonate (EMS) was used to induce the mutations in the sperm, but noted that radiation or transposable elements could also be used to create mutations (Pierce, 2012). Next, each male mates with a wild-type female, creating an F1 generation (Gilbert, 2014). The F1 generation fish should have the mutations their father had (Gilbert, 2014). Gilbert went on to explain that if the mutation is dominant, expression will occur in this generation, but if it is recessive, the mutant phenotype will not be seen (Gilbert, 2014). The fish of the F1 generation are then mate with wild-type fish to create the F2 generation, all of which carry the mutated allele (Gilbert, 2014). Since the hallmark of zebrafish is visible development because of the transparent embryos, scientists can easily observe and track abnormal development, and “defects in development can often be traced to changes in a particular group of cells” (Gilbert, 2014). In summary, a mutation is induced within a group of zebrafish and this mutation is passed to subsequent generations through specific mating procedures. The end goal of this process is to observe development and trace issues back to original cells. Once function in a model organism is determined, the cells and function can start to be tracked in more complex organisms such as humans, allowing for better understanding of physiological processes and disease progression.

Gilbert explains there are two processes to determine if zebrafish genes are needed for a certain action to occur: the use of morpholino antisense molecules and green fluorescent protein reporter genes (Gilbert, 2014). Morpholino antisense molecules are used to test if a gene is needed for a specific function through susceptibility to the molecule (Gilbert, 2014). In regards to the green fluorescence protein reporter gene, this gene can be bound to promoters or enhancers to look for gene expression due to this control (Gilbert, 2014). The fluorescence protein will be expressed at the same time and location as the proteins that are expressed through this control (Gilbert, 2014). Scientists will be able to easily view locations due to their bright green color and compare it to controls to see if issues are present. 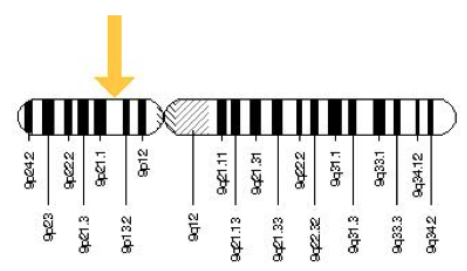 Zebrafish were chosen by the authors for use in their study of GNE Myopathy because they are great model organisms for researching human conditions, especially neuromuscular diseases (Daya et al., 2014). Also, all of the proteins involved in human skeletal muscle disorders are expressed in these organisms and take part in the same pathways (Daya et al., 2014). This will allow for direct relation of results found in zebrafish to humans. 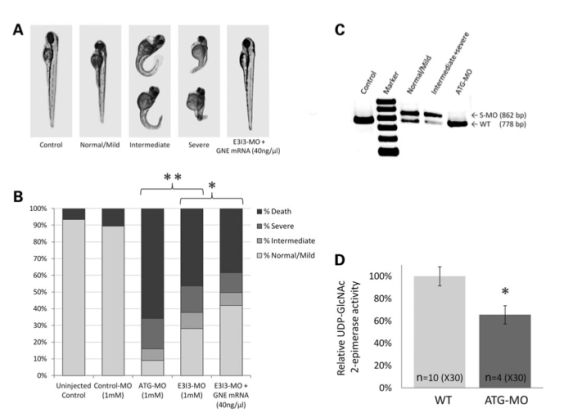 In regards to locomotor activity ability, knock out techniques were again utilized (Daya et al., 2014). It was observed in seven day post-fertilization zebrafish subjected to exposure of either 1 mM gne E313-MO or with the control 1mM control-MO that “gne morphants swim at a significantly lower average velocity compared with the control” (Daya et al., 2014, p. 6). This result showed that those lacking Gne gene expression have abnormal locomotor ability, and presumably abnormal muscles.

In their discussion, the authors stated “the mechanism leading from the mutations to the muscle defect remains unexplained” (Daya et al., 2014, p. 6). Even though the exact connection to GNE Myopathy was not found in this study, their research was valuable in it was able to show that the Gne gene is present and necessary in certain regions of the zebrafish for embryonic and muscular development (Daya et al., 2014). Scientists now have a better understanding of the relationship between the Gne gene and muscles. Further studies will be able to use this information to help try to make the direct link between the Gne gene and GNE Myopathy.

Zebrafish have proved themselves to be valuable model organisms within the field of science. Their unique characteristics allow for ease of experimentation and observation of results, especially within genetic screens. In regards to furthering knowledge of human disease, zebrafish have allowed for better understanding of the Gne gene and its relationship to GNE Myopathy. The goal of testing with model organisms is to gain knowledge, be able to apply results to more complex organisms, gain better understanding of human diseases, and begin to create treatments to help those inflicted. Zebrafish have certainly contributed to this process.