Evolution is an ongoing topic in this world due to the organisms’ ability to adapt and mutate in order for them to survive in a harsh environment. Humans are among the most developed species in knowledge wise and we are constantly discovering mysteries in science. We use many model organisms to help us identify and cure diseases and one such model is the zebrafish.

In haploid screen, the female zebrafish are squeezed gently to release their egg. It will then be manipulated to fertilize with ultraviolet (UV)-treated sperm to produce a haploid embryo. The reason for UV-treatment is to destroy the parental DNA so that it doesn’t influence the egg’s development in anyway. A haploid clutch derived from a heterozygous female will contain 50% mutant and 50% wild-type embryos. The differences between diploid and haploid embryos are that haploid embryos are visibly shorter with abnormal eyes (arrow) and otic vesicle (arrowhead) development. Besides that, their overall morphology is similar. Recessive mutations can be revealed more quickly in zebrafish by taking advantage of their ability to survive for several days as haploid organisms. 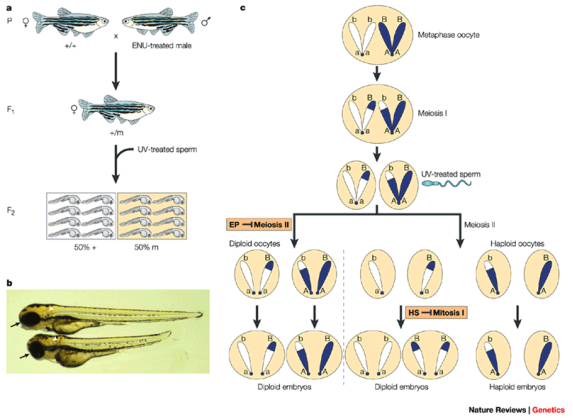 Homozygous diploid screen is also a method to induce gynogenesis. During homozygous diploid, eggs that were extracted from the female have completed meiosis I during ovulation and initiate meiosis II on fertilization. The breakdown of the meiotic spindle is due to the early pressure (EP) applied to the embryo during the first few minutes post-fertilization and the egg retains both sister chromatids. Hence, eggs then undergo their first mitosis as diploids, with two sets of maternal chromosomes. Heat-shock treatment, by contrast, inhibits the first mitotic division and eggs activated with UV-treated sperm enter the first mitotic division as haploids, terminates mitosis and directly enters the second mitotic division as diploids. DNA recombination and chiasma interference in meiosis occurs between homologous chromosomes when aligned as tetrads. There’s on average, a single crossover event per chromosome arm. Therefore, embryos that are derived from EP treatment will be homozygous for loci that are proximal to the crossover event that occurred at meiosis I (allele ‘a’ in the figure) and heterozygous for loci that are distal to it. Similar to haploid clutches, a gynogenetic diploid clutch that is derived from a heterozygous female and generated by HS will contain 50% mutant and 50% wild-type embryos. As embryos generated by HS are homozygous at all loci, they would be preferable to embryos generated by EP for use in genetic screens, except for their reportedly poor viability (10–20%).

Besides these two screens mentioned above, there are many more screens being done by scientists such as behaviour screen, and biochemical blood screen.

Procedure one experiment used to screen zebrafish is to use about fifteen pairs of fish per family, and about 100 families per week were set up for egg lay in one afternoon of the week. The following morning eggs from successful matings were collected using tea strainer, and 2-3×40 fertilized embryos were sorted within 6 hpf (hours postfertilization) into 60 mm Petri dishes in E3 medium. From about 300 families no successful matings were obtained, mainly because the fish showed an extreme sex ratio (mostly male families). The parents of successful matings were kept until the final evaluation of the retinotectal screen. Fish that had not laid on the first day were checked again on the second day after set up. The number and quality of the fish varied within the screen and not all matings were successful. Fish of unsuccessful matings by the second day were returned to their tank, and more crosses of their family, if necessary, were set up 2 weeks later. In general, not more than eight crosses of one family were evaluated with care.

Embryos were scored at three successive time points (the second, third, abd sixth day after collection) corresponding to the pharyngula period, the hatching period, and the swimming larva, for abnormalities visible under a dissecting microscope at maximal 80x magnification. During the screening period, the egg lays were kept at 28 degrees Celsius. At each time point, after a general inspection, at least 12 embryos or larvae of each egg collection were aligned and inspected using a checklist. Embryos of the pharyngula period (24-48 hpf) were examined for abnormalities in the shape and morphology of the developing eyes, brain, notochord, spinal cord and somites. After hatching (third and sixth day screen), embryos were checked for motility, and were then anesthetized vefore further scoring. In addition to the structures scored earlier, the development of the cardiovascular system and the fins were scored in size of the melanophores, and the intensity of pigmentation of xanthophores, melanophores and iridophores. This experiment also checked whether the embryos had an air-filled swinbladder. The larvae were also inspected with incident light to examine iridophore pigmentation and muscle striation. To assay for motility, the larvae were swirled into the center of the dish and observed as they moved from the center. The response to touch was tested. During each screen, the general appearance of mutant embryos or larvae was noted, and it was recorded whether they showed signs of retardation or slow death.

Some genes that were identified in zebrafish screening are the chordin genes, brachyury, and sonic you (syu). Chordin gene corresponds to dino gene which is responsible for dorsal-ventral organizing activity in a vertebrate organism. Brachyury encodes for the T-box protein and zebrafish homologue of the T-box, in turn is encoded by ntl (no tail) which is closely related to flh (floating head). Sonic you is the zebrafish’s equivalence to sonic hedgehog. 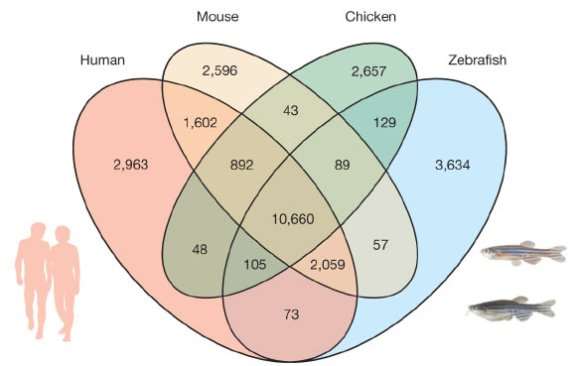 Zebrafish research has already begun in the research of cancer and heart diseases and is now advancing towards the understanding of muscle and organ developments. Zebrafish have been used to verify the causal gene in muscular dystrophy disorders and also to understand the evolution and formation of melanomas or skin cancers.

Zebrafish are unique because they have some features that are not seen in other vertebrates. For example, they have the highest repeat content in their genome compared to other vertebrate species. Zebrafish also identified chromosomal regions in the genome of zebrafish that’s responsible/influences got sex determination.

“To realize the benefits the zebrafish can make to human health, we need to understand the genome in its entirety – both the similarities to the human genome and the differences. Armed with the zebrafish genome, we can now better understand how changes to our genomes result in disease,” said Prof Christiane Nüsslein-Volhard, co-author and Nobel laureate from the Max Planck Institute for Developmental Biology. “This genome will help to uncover the biological processes responsible for common and rare disease and opens up exciting new avenues for disease screening and drug development,” Dr Stemple said.