White spot syndrome virus (WSSV) continues to cause huge economic losses in the aquaculture farms due to rapid spread and broad host range. In this study, we synthesized a novel synthetic compound 3-(1-chloropiperidin-4-yl)-6-fluoro benzisoxazole 2 and were screened for antiviral activity against WSSV using fresh water crabs Paratelphusa hydrodomous (Herbst). In vivo bio-assay was carried out to determine the antiviral activity. Reverse transcriptase polymerase chain reaction (RT-PCR) and Histopathology were used for the analysis of bio-assay. Overall result shows that the novel compound has strong antiviral potency against WSSV.

Synthetic compounds like Piperidines and Benzisoxazoles are important group of heterocyclic compounds in the field of medicinal chemistry. These compounds have significant biological and pharmacological properties like anti-inflammatory, antifungal, antimicrobial, and anticancer activities (Gaba et al., 2014; Ramalingan et al., 2004) (Ramalingan, 2004 #21;Gaba, 2014 #22). Many fluorinated, benzisoxazole derivatives are currently used in the treatment of diseases (Prasad et al., 2009). In such a way, there is an immediate need for non-toxic drug to treat WSSV disease. Thus the present study was carried out to determine the antiviral activity and protective effect of a novel synthesized compound 3-(1-chloropiperidin-4-yl)-6-fluorobenzisoxazole 2 (Fig. 1) against WSSV infection in fresh water rice-field crab P. hydrodomous, it was highly susceptible to WSSV (Sahul Hameed et al., 2001).

A synthesis of novel 3-(1-chloropiperidin-4-yl)-6-fluorobenzisoxazole was carried out under mild reaction conditions using 1.2 equivalents of calcium hypochlorite. Interestingly, the developed method does not involve any additives like acids or bases and provides 96 % of isolated yields at room temperature. This novel molecule, 3-(1-chloropiperidin-4-yl)-6-fluorobenzisoxazole 2 was stable at ambient conditions and stereo chemistry was established the single crystal XRD technique. The materials were purchased from Sigma-Aldrich, Merck and were used without any additional purification. All reactions were monitored by thin layer chromatography (TLC). Melting points were recorded on an Elchem digital melting point apparatus in open capillaries and are uncorrected. The 1H NMR was measured on a Bruker Avance-400 MHz instrument at room temperature. The 1H NMR was measured for ~0.03 M solutions in CDCl3 using TMS as internal reference. The accuracy of the 1H shifts is considered to be 0.02 ppm. The coupling constants J are in Hertz. Mass spectra were obtained using ESI mass spectrometry. 6-fluoro-3-(piperidin-4-yl) benzisoxazole 1 (5 g, 22.7 mmol) was taken into the round bottom flask dissolved in 50 mL of acetonitrile. To this calcium hypochlorite (3.9 g, 27.3mmol) was slowly added over ten to twenty minutes. Reaction was monitored by TLC. After the reaction completion, reaction mass was filtered and salts was washed with acetonitrile. Solvent was dried under reduced pressure. Crude solid was purified by column chromatography to give 3-(1-chloropiperidin-4-yl)-6-fluorobenzisoxazole 2 in 96 % (5.54g, 21.8mmol) as pale yellow color solid. The structure of the N-chloro benzisoxazole was conï¬rmed from their spectral data from NMR, ES Mass and single crystal XRD.

The crabs P. hydrodomous (20-25 g body weight) were collected from the rice field located at kalavai, Vellore, India. Crabs were transported to the laboratory. A previous method was followed for maintaining the crabs and preparation of WSSV inoculum (Nambi et al., 2012). For in vivo determination of antiviral activity, the healthy crabs were divided into three groups contains 3 crabs per group and each trial was conducted in triplicates. Crabs in the group I were injected with 100 µl of a mixture of viral suspension and NTE buffer which served as positive control. In Group II crabs were injected with NTE buffer alone served as negative control. In Group III crabs were injected with viral suspension, novel compound and NTE buffer served as treated. The viral suspensions for all groups were incubated at room temperature for 3 h. Later it was injected into respective experimental groups intramuscularly. The experimental animals were examined twice per day for gross signs of disease, and the number of deaths was recorded until end of the experiment. Animals in the treated and negative control group were survived without any mortality and sign of WSSV infection until end of the experiment. Whereas the positive control group reached 100 % mortality at 7th day of post injection with gross signs including reduced feed consumption, less active in slow in movement. The observation of this bio-assay was plotted in a cumulative mortality graph (Fig. 2).

For RT-PCR analysis; Gill, head-soft tissue, heart and muscle tissue were excised from each crabs of the experimental group and pooled together for extraction of total RNA using Trizol (Invitrogen, USA) according to the manufacturer’s instructions. cDNA was synthesized from 1.0μg of the total RNA using a One-step Reverse Transcriptase (Invitrogen, USA) as per the kit instructions and used as template for gene expression analysis of WSSV specific primer VP28. β-actin served as an internal control for RNA quality and amplification efficiency. The sequences of primers used in this present study were given in Table 1. The cycling conditions are initial denaturation at 95°C for 5 min followed by 35 cycles of denaturation at 95°C for 30 sec, annealing at 50°C for 30 sec and extension at 72°C for 30 sec with a final extension at 72°C for 10 min. The amplified PCR products were electrophoresed in 1.0 % agarose gel stained with ethidium bromide and visualized by ultraviolet transilluminator. There were no bands was found for negative control and all the tissue cDNA templates from the treated crabs, a band came at 615 bp for positive control (Fig. 3A). Bands came well for the same templates subjected to β-actin PCR (Fig. 3B).

For histological analysis, a small portion of gill and head-soft tissue was taken from all the three experimental groups and was fixed in Davidson’s fixative for subsequent histological preparations (Bell and Lightner, 1988) with haematoxylin and eosin according to the standard protocol. The stained sections of gills and head-soft tissue from the control crabs show no histopathological changes (Fig. 4A & 4B). Whereas in the positive control cells having hypertrophied nuclei with intranuclear inclusions typical for WSSV infection (Fig. 4C & 4D). No significant changes were observed in treated group (Fig. 4E & 4F) indicates no WSSV infection. In conclusion, a novel compound 3-(1-chloropiperidin-4-yl)-6-fluorobenzisoxazole 2 derivatives showed strong antiviral activity against WSSV in fresh water crabs P. hydrodomous. This works may help to design a novel non-toxic drug to treat WSSV infection.

Primers used for the RT-PCR 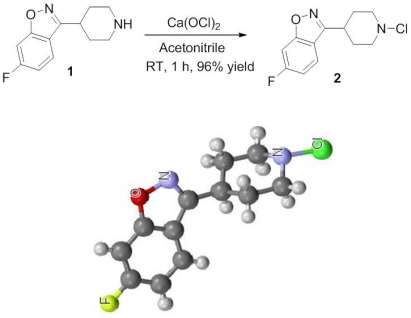 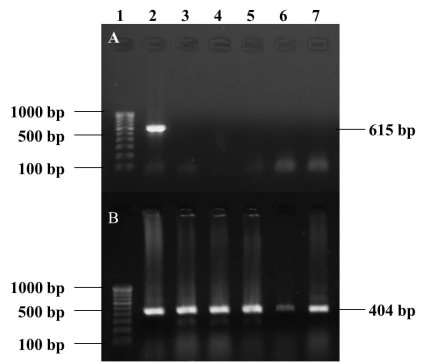 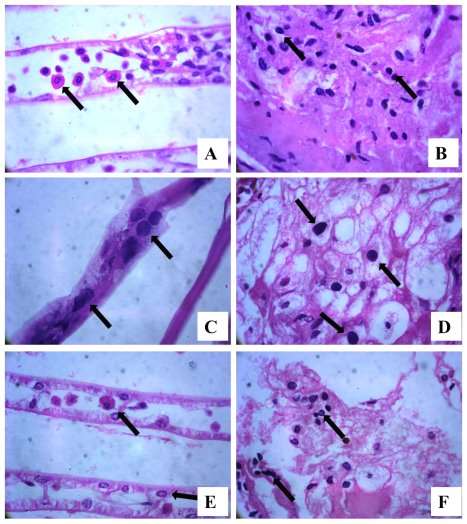