In order to double food production for the increasing population of the world. That is predicted to be around 11 billion people by the year 2050 (James and Krattiger, 1996). The scientists and the developing communities believed that the conventional agriculture process would not produce enough food and resources to sustain the increasing population. This has lead scientists to research new technologies that will help increase the yield of crops. These new technologies are known as biotechnology or commonly known as genetically modified organism (GMO) (James and Krattiger, 1996). This technology involves the application of genetic engineering in biotechnology which involves the use of transgenic crops this is when a gene or a genetic contrast has been introduced into an organism by molecular techniques.

Other concerns about the use of genetically modified organisms is the potential effects they may have on human health. Food allergies are a common risk in genetically modified organisms. If the novel protein in GM foods come from a known source that causes allergies in humans. Such as proteins being introduced from plants that aren’t normally consumed by humans there is a concern that the protein could cause people to develop a provoke immune response that will cause allergies in humans to increase. Other examples of concerns for human health is the chance of toxicity in GM foods to increase. Genetically modified foods can also decreases the nutrition values of food.

The OGTR use technology to detect the genetically modified organisms in foods. One of these technologies is known as PCR polymerase chain reaction. Using this technology it is possible to detect the exact sequence that has been inserted in the PCR machine can detect the GMO.

The method that was used in this experiment followed the lab manual exactly.

From looking at the results that have been recovered from the PCR tests in Table 1 the results showed that there was only one genetically modified organism out of all the foods that where tested. The only foods that showed a positive result for the GMO primer was the positive control group. The GMO control group also showed a positive result for the plant primer for the photosystem 2 gene. Another food that tested positive for the GMO was the papaya. The rest of beside 4 tested negative for the GMO but positive for PMM. These where the Kiwi Fruit, Celery, Soy Sauce, Corn Wrap, Polenta, Corn Chips, Apple and a tortilla. Only one produce tested negative for both GMO and PMM this was the Banana. There were four errors in total for the experiment that resulted in no reading at all these were the Corn Flour, Soy cheese, Bread Mix and Carrot.

During this experiment with the types of methods we have used we were able to test for genetically modified organisms in the selected food products that were chosen. From the experiment on the different foods using the PCR we were able to see that the majority of the food tested are in fact not GMO. Beside the four errors that occurred during the PCR process the experiment was successful in identifying genetically modified organisms. The errors that did occur was due to human fault from either not preparing the sample properly. The errors may also have occurred from accidently spilling the food sample outside of the wells in the gel of the PCR machine which lead to bad readings. The only things that tested positive to being a genetically modified organism is the positive GMO control and the one food sample that tested positive for the GMO was the papaya. The only sample that tested negative for the PMM was the Banana this means I it didn’t test positive to contain the Photosystem 2 gene.

As mentioned before in the introduction of the experiment the method that is widely used to identify genetically modified foods is the polymerase chain reaction PCR (Harvey Lodish, 2013). This method depends on its ability to alternate and denature the double strand of DNA molecules. The PCR method begins by heating up the DNA to 95 â-¦C this denatures the DNA into single strands it is then recombined into specific regions through the use of specific loci and primers (Harvey Lodish, 2013). The DNA molecules are reformed by the use of heat resistant enzymes. Once this process is completed the DNA fragments are then put through an electrophoresis treatment this treatment involves an electrical current to pass through the 3 percent agarose gel matrix which encourages the DNA molecules to move and separate to different locations this is determined by their molecular weight (Harvey Lodish, 2013). The locations then form markings in the gel which is then used to determine whether the desired sample has been genetically modified or not.

PCR technology’s high level of sensitivity for detecting GMOs explains why it is the method of choice for scientists (Holst-Jensen, Rønning et al., 2003). While using PCR method of detection the most important factor to remember is the choice of sequence motif. The sequence motif is important to help decide what target gene that you require to detect in the PCR sequencing (Holst-Jensen, Rønning et al., 2003).

Set up for PCR

Each sample requires two PCR tubes: one for the Plant master mix and another for the GMO master mix 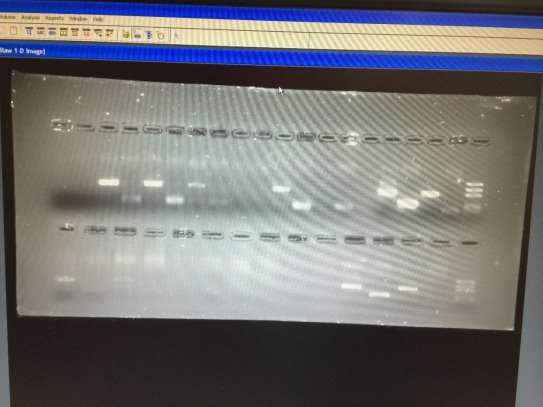 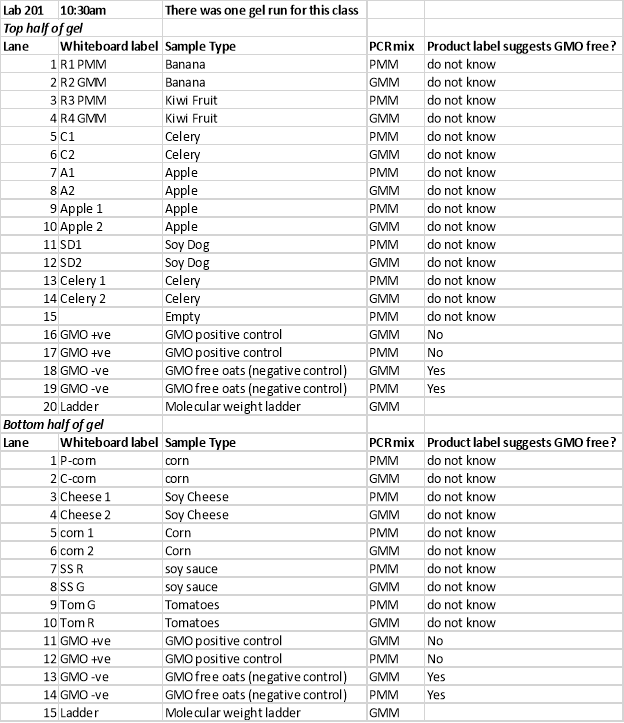 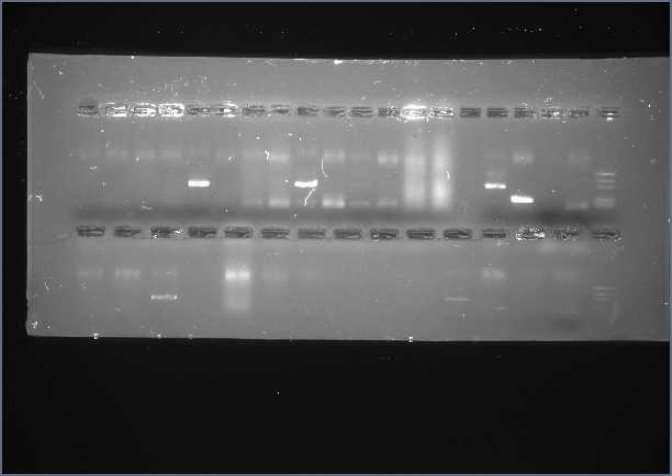 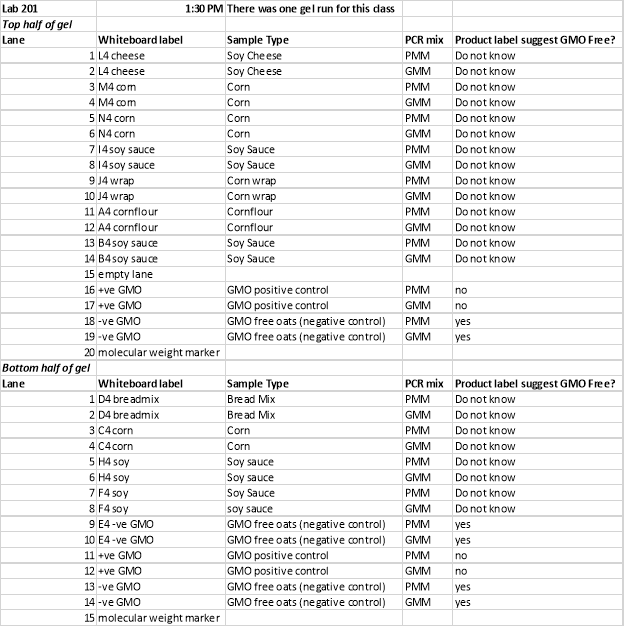 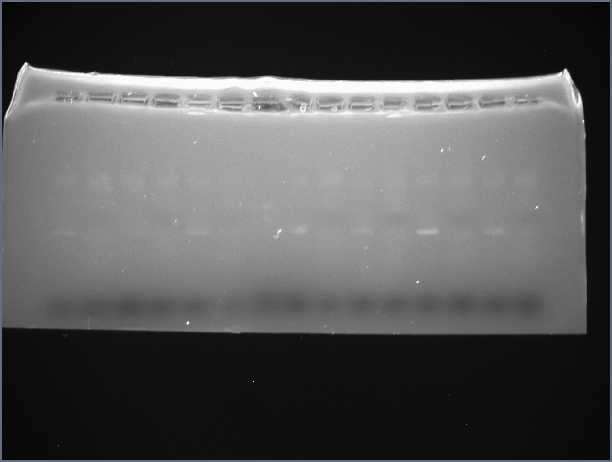 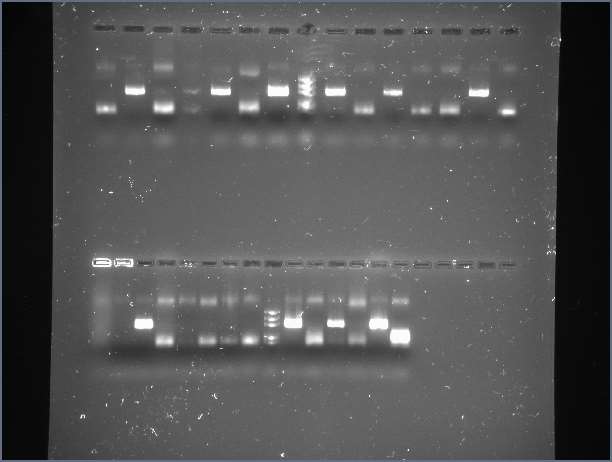 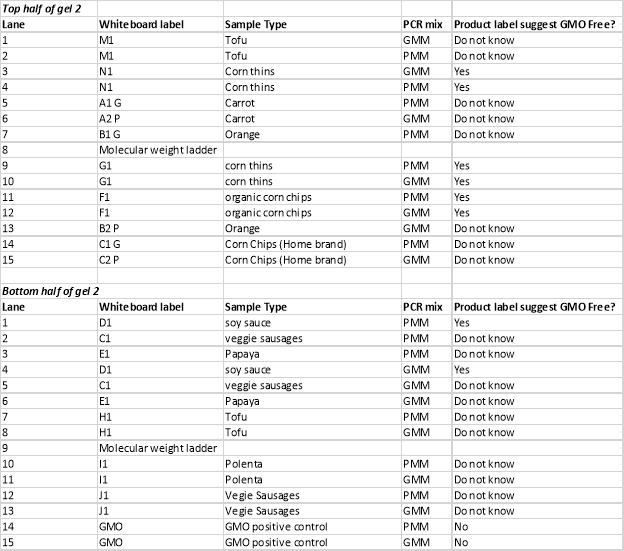 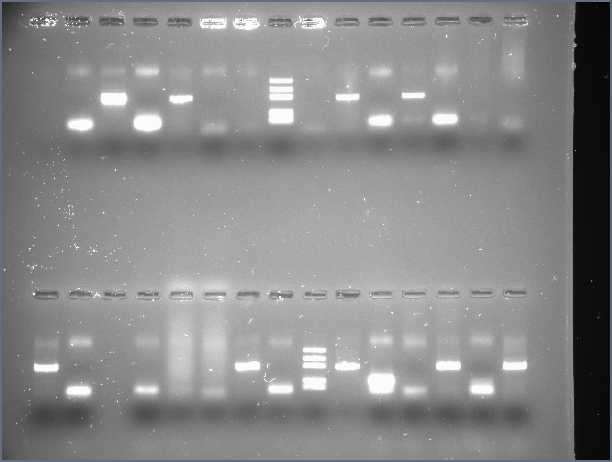 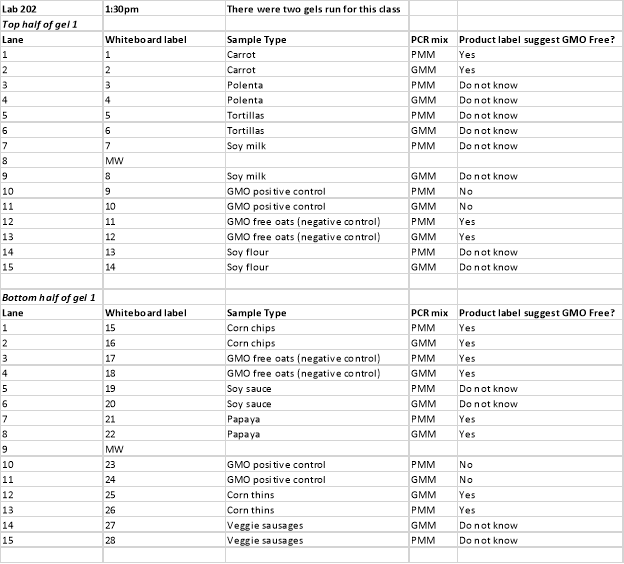 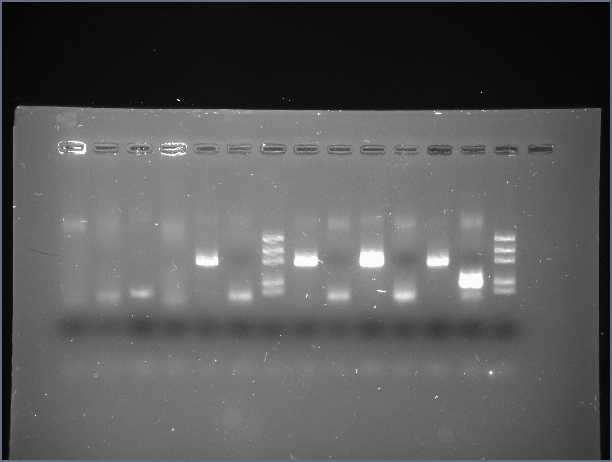