1.1 The advance of nanoparticles

The synthesis of magnetite nanoparticles (F e3O4) has been put on with their enormous interest for a very long time. It is especially because of their tremendous technological applications in the pattern of ferrofluids. The ferrofluid is a kind of gluey suspension of fairish oiled magnetite particles in type of liquid medium having abnormal properties as a result of the reciprocal fluid mechanical effects and also magnetic effects. Its extensive applications are in the pattern of stamps in order to maximize the performance for audio speakers, to maintain the CD drives are good in high speed functioning. For ferrofluids, there will be perspective future biomedical applications. In order to implement such appropriate properties, there is a very huge potential for the nanoparticles with super paramagnetic properties. By the way, on top of the synthesis procedure, the magnetite with magnetic properties based nanoparticles or films will be extremely depended on.

For the composite applications in the field of electronic, biomedical and also optical field, the production of nanomaterials has been frequently growing past the last few years’ time. As the achievement gained while specific occupational exposure restricts are insufficient, the exposure regarding nanoparticles in the workplace environment is enhanced. It is very significant for the scientifically based draw on to the assessment of risk for the nanoparticles; it generally acknowledged the ad-hoc operating group named ‘Nanoparticles’. Their mission was to inspect the present database commodious for the assessment of risk for nanoparticles in order to determine corresponding endpoints of toxicological interest and to determine make open to the public questions for the future study.

The importance of microorganisms in the biogeochemical cycling of iron is well recognized. Dissimilatory iron-reducing bacteria (DIRB) which are submerged in soils and aquifers can metabolize organic matter or oxidised H2 coupled to the reduction of various Fe (III) oxides to obtain energy for growth and function. In sulfidogenic environment, H2S is a possible reduction of iron oxides, however, under non-sulfidogenic and anoxic environments DIRB catalyses most of the Fe (III) reduction (Hansel, et al., 2003). For the alteration in the existence of the rusted iron, the dissimilatory iron reducing bacteria are able to provoke the ratio of carbon Tetrachloride (CT). DIRB reduction of solid phase ferric iron observed in batch systems following microbial respiration of ferrihydrite under varying environmental conditions can form siderite, magnetite, vivianite and green rust. Shewanella agla BrY, the DIRB, be firmly entrenched to the rusted Fe appearances that demonstrated little or no containment in order to transform Tetrachloride. The increased of ferrous iron concentrations and growth Tetrachloride alteration to Chloroform (CF) is because of the annexation of BrY with a decreased Tetracloride alteration ratio of these systems. Lastly the outcomes propose that DIRB could have an effect of the long time capability of Fe 0. 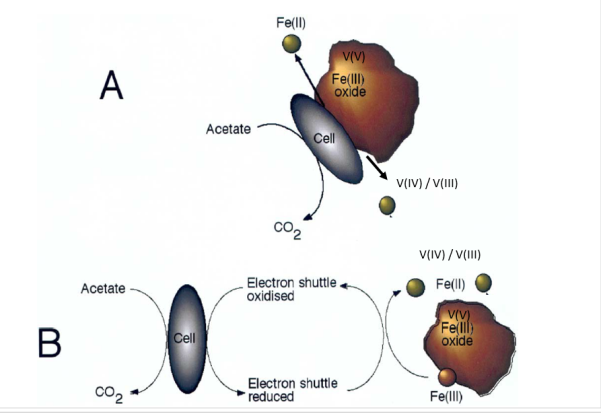 In Fig. 1.4(A) Cells oxidize organic substrates such as acetate to produce CO2 and directly donate electrons to the extracellular vanadium (V)-bearing ferrihydrite and produce V-magnetite. However, the electron transfer reaction requires close contact between the cell surface and the mineral phase.

In Fig. 4.1(B) The rate of reduction by the bacteria can be increased by addition of AQDS which is reduced by the cells and acts as an electron shuttle between the cell surface and the Fe (III)-bearing mineral. The AQDS donates electrons to the V-Fe-hydroxide, reducing Fe (III) to Fe (II) and V (V) to V (IV/III) and result in the formation of V-magnetite. The existence of the organic matter for example, like, AQDS pattern quinone and also Aldrich Humic Acid (HA) have lately been inspected in hypoxia condition including Fe (II) -bearing iron mineral.

Magnetite has a cubic spinel structure with one quarter of the tetrahedral (Td) and one half of the octahedral (Oh) sites filled by Fe cations. The chemical formula of magnetite is Fe2+Fe3+2O4, though Fe3+ is equally split between (Td) and (Oh) sites, whereas Fe2+ occupies only Oh sites resulting in a distribution for stoichiometric magnetite with the ratio of 1:1:1, where the tetrahedral and octahedral sites shown in Fig. 4.2 separately. The magnetic exchange in the magnetite is managed by the association of ferromagnetic double exchange (DE) and also antiferromagnetic superexchange (SE) interplays.

Magnetite is widely distributed on the earth’s surface, chemical analysis of natural magnetite suggests that a naturally occurring pure magnetite is rare and isomorphous substitution widely occurs in natural magnetite, thereby, ferric and ferrous ions can be substituted by divalent Co, Ni, Zn, Mn, and trivalent V and Cr and tetravalent Ti (Liang, et al., 2010). These substitutions significantly affect the physical-chemical properties of nanoparticles, and allow them to be customised for various technological applications. Recent studies reveal that the incorporation of additional metal cations into the spinel structure is advantageous to the physical-chemical properties of magnetite. For instance, the introduction of Co, Mn and Cr brings improvement to the catalytic activity of the resulting magnetite in heterogeneous Fenton reaction whereas Ni inhibits the reaction. Cr stabilized structure of magnetite while men decrease the temperature of phase transformation between maghemite-Hematite.

Vanadium bearing magnetite is very common in nature, and is a vital host of iron and vanadium, the most abundant V-magnetite is often intergrown with titanomagetite located in China. V-magnetite has been investigated by Liang et al. (2010) in terms of metal valency, cations occupancy, thermal stability, adsorption properties and catalytic activity. Furthermore, Coker et al. (2012) also revealed the potential of biological doping of vanadium-magnetite.

1.4 Contamination and remediation of vanadium

Vanadium is both a prevalent environmental concern and an important commercial metal (Yelton, et al., 2013). It is an element that has been used widely in a range of industrial processes such as in metallurgy, steel industry, space technology, pharmaceutical industrial processes, and the nuclear power industry. In addition, vanadium can serve as a catalyst in the reduction of NOx and production of phthalic anhydrides (Bredberg, et al., 2003), as well as a competitive substrate with phosphate due to its exceptional position among the biometals in which both of its cationic and anionic forms can participate in biological process, thus inhibiting and/or stimulating many phosphate metabolizing enzymes

The primary source of vanadium is mainly for titanomagetite deposits, where vanadium is present as a minor replacement for iron (Evan, et al., 1987). It is also found in uranium bearing minerals and is an impurity produced from combustion of fossilized organic materials, for instance crude oils, fossil fuels and coal (Ortiz-Bernad, et al., 2004). The diverse use and high economic value of vanadium, makes it one of the most important metals for modern technology, however, contamination of vanadium in the environment is also of concern with the continuous growth of industrialization. The major sources of vanadium contamination are from anthropogenic activities, where the contaminants enter the fresh water system and soil that cause serious contamination. Vanadium is highly toxic to human and animals at concentrations greater than 1-10 nM, which can cause inhalation and oral diseases, and is found to be associated with lung cancer (ATSDR, 2009).

Vanadium exists in different oxidation states from -2 to +5, but the naturally occurring oxidation states are V (V), V (IV) and V (III). The toxicity of these three oxidation states varies substantially with the nature of the compound, but generally increases as the redox state increases. Under aerobic conditions, V (V) is the dominant species found in aqueous solution and exists as vanadate (V) compounds which are the most soluble and toxic vanadium compounds. Whereas the Vanadyl ion (IV) is usually detected in reducing environments, and is known as the most stable diatomic ion since in neutral pH it is rather insoluble and strongly adsorbed on particles forming stable complexes. Vanadium cannot be completely destroyed by the environment, it can only change its form or become attached or separated from airborne particulates, soil, particulates in the water, or sediment. Therefore, promoting reduction of V (V) to lower redox states can reduce the toxicity of vanadium and be a potential remediation strategy for V (V) immobilization, and removal of V (V) from contaminated groundwater.

Previous studies have reported that microorganisms can reduce V (V) by respiration via electron transfer [refs].

A range of bacteria appears to have tolerated against vanadium and among the tolerant bacteria, some accumulate vanadium in the form of precipitates. Physically, arising anaerobic Fe(III) deoxidization bacteria are capable to diametrically breathe many kinds of different oxidized metal species, for example, like, Mn(VI), Fe(III) and V(V) by pairing metal reduction to oxidize the naturally arising organic compound. Therefore, lead to the objectives of this report.