Abstract: It is a well-known fact that cigarette smoking (CS) is directly associated with cardiovascular diseases, chronic bronchitis, and various types of cancers worldwide. In this study, two parameters were taken in consideration. Firstly, we have focused on how cigarette smoking is affecting the oral micro-flora. Second parameter was to figure out if cigarette smoking has any change in alpha-amylase activity. Human mouth harbors complex, abundant, and highly diverse micro-flora, the comparative study was conducted to check the bacterial colonization between smokers (test samples) and nonsmokers (control). Thirty male volunteers from VIT University (15 smoker and 15 nonsmokers) ranging between 20 to 30 years of age were taken in this study. For this, salivary samples were taken from the volunteers both smoker and nonsmoker. The salivary samples taken were spread plated on nutrient agar media and comparative study was done on bacterial colonization, which showed that the test samples showed maximum bacterial colonies when compared to control. The second parameter, which was considered was alpha-amylase activity. Alpha amylase is one such protein enzyme present in human saliva, which hydrolyses alpha bonds of larger alpha-linked polysaccharides. These polysaccharides are mainly present in glycogen and starch, which on breakdown yields glucose, maltose, and dextrin, which makes the digestion process easier. We are currently focusing on estimation of amylase activity between smokers and nonsmokers for which salivary samples were taken from the same volunteers. It could be possible that the activity of amylase in smokers could quite be different from those in nonsmokers.

Cigarette smoking is one of the leading preventable causes of cardiovascular diseases, chronic bronchitis, and various types of cancers and finally leading to death worldwide. All most every organ of the body and overall health of a person is affected by cigarette smoking. Death rate is around 480,000 each year in United States, which is found to be one in five deaths. Apart from all these facts about smoking, there are more than 700 microbial species found in the oral cavity of which over 50% have been detected and cultivated. There were 2 main purposes of our study: (i) our first attempt was to find out on how cigarette smoking was affecting the oral micro-flora, and (ii) to figure out if cigarette smoking has any change in alpha-amylase activity, which is one of the prominent and digestive enzymes in human saliva. The micro-flora present in human mouth shows complex, abundant, and highly diverse in nature and keeping that in mind we had conducted a comparative study to check bacterial colonization between smokers (test samples) and nonsmokers (control). For this study, 30 volunteers participated; all of them gave their informed consent before the study. Thirty male volunteers from VIT University (15 smoker and 15 nonsmokers) ranging between 20 to 30 years of age participated in this study. Saliva was collected from these volunteers for our study purpose. All the volunteers were asked about their detailed smoking history. For nonsmokers, volunteers with no history of any kind of smoking activity are considered. For smoker, volunteers with the following criteria were considered while taking salivary samples:

(i) Number of cigarettes or beedies consumed daily [1]

For second parameter was, (ii) estimation of alpha-amylase activity. Alpha amylase is one of the major enzyme present in human saliva, which helps in partial digestion of the food in mouth by hydrolyzing the alpha bonds of the polysaccharides, which are alpha-linked. These polysaccharides are major components of glycogen and starch, which on breakdown yields glucose, maltose, and dextrin, which makes the digestion process easier. To explore more about the estimation of amylase activity between smokers and nonsmokers for which same salivary samples were taken. It could be possible that the activity of amylase in smokers could quite be different from those in nonsmokers.

Thirty males comprising of fifteen smokers and fifteen nonsmokers all in the age group ranging from 20-25 years were selected. The subjects were randomly selected on basis of their smoking history. We took precaution that all those thirty volunteers who had participated were not on any antibiotic medication during last 6 months.

Participants were asked to rinse their mouth with water 10 min prior to saliva collection. Approximately 3 ml of saliva was collected from donor into the sterile glass vial according to the method described by Navazesh 1993 (cited by Rohleder et al 2008).

Serial dilution was performed with the samples collected with distilled water. Serial dilutions (1/10000) of the samples were plated on NA medium inside the laminar air flow hood by spread plate method. In the spread plate, 0.5 ml of inoculum was spread over the surface of the agar. The plates were turned upside down and place in incubated at 37ºC for 24 hours.

The number of colonies for each petri dish culture was determined with the formula:

Amylase activity was estimated using standard protocol from Lab Manual (VIT University, 2013). For the experimental use saliva was diluted in distilled water (1:10). For preparation of test solution by taking 1 ml of phosphate buffer (0.050 M, pH 7.1) and 1 ml of diluted salivary amylase enzyme. With the help of test blank, which contains 1ml starch and 2ml of phosphate buffer incubate for 15 min at 30ºC. The amount of maltose released is estimated by DNS method. Series of standards using maltose from 200 mg to 1000 mg concentration is prepared.

The absorbance at 510 nm was measured and a standard graph was plotted. With the help of standard the amount of maltose breakdown by the enzyme amylase was estimated, and this gives the enzyme activity.

The Microsoft Word and Excel were used to generate graphs, tables, and so forth.

The 30 volunteers from VIT University participated in our study in which 15 were smoker and remaining 15 were nonsmoker (control). We diluted salivary samples and inoculated in petri plates and incubated for 24 hours (as described above). After the incubation period it was observed that colonies formed in smoker samples were higher in number when compared to non-smoker sample. 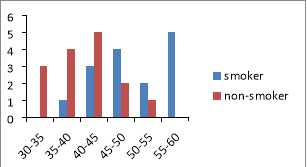 The salivary amylase collected from all participants was analyzed with standard protocol and calculated the activity of amylase per unit. The sample was immediately analyzed to reduce the error causing in calculating amylase activity. 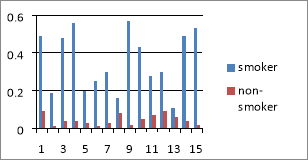 At the global level smoking is the major public health hazard. This is just not harming the individual alone but also to other people who are surrounding them. Smoking has diverse effect on human body like mouth, cardiovascular, liver, lungs and so on.

This study is an explorative attempt to know the effect of smoking on mouth microbe’s health and activity of salivary amylase with different parameters.

The comparative data obtained from smokers and nonsmokers volunteers showed significant difference in microbial colony number and also the amylase activity. To minimize the effect of all other possible factors volunteers belonging to same sex and same age group had been taken in consideration.

The findings of given study emphasizes that smoker volunteers had effected on both amylase activity of salivary amylase as well as health of mouth micro-biota. So the best way to prevent this is by educating people about it and if possible by including these issues in public health education.