Part 2 – Explain the structure of the respiratory system by completing a table detailing component, structure and function(s). (300 words)

Part 3 – Explain the structure of the gastro-intestinal system by completing a table detailing component system organ, structure and function(s). (300 words)

Criteria 1.2 Explain the mechanism of transport of oxygen and carbon dioxide in the body

Criteria 2.2 Explain the principle of gaseous exchange in the lungs

Write a short account explaining how oxygen gets from the environment to the cells and vice versa. (400 words)

Oxygen from the environment gets into the body by breathing and this supplies all the parts of the body. We breathe in oxygen and exhale carbon dioxide via the mouth, nose, trachea, lungs and diaphragm.

Oxygen enters the respiratory system at the mouth and nose and passes through the larynx and trachea. The trachea branches into two tubes called bronchi which split again to form the bronchial tubes. The inhaled oxygen travels down these tubesinto the lungs and intolittle spongy air sacs called alveoli.

In the alveoli oxygen diffuses through the respiratory membrane into the bloodin the lung capillaries. Diffusion will happen here as long as the concentration of oxygen is greater than it is in the blood as particles diffuse down a concentration gradient from where there is a high concentration to low. The rate of this process is regulated by the amount of carbon dioxide and oxygen in the blood and happens quickly through the air/blood barrier in the lungs. This barrier is comprised of alveolar epithelium, basement membrane, and endothelium. Its purpose is to make sure that air does not get in the blood and form bubbles and blood get into the alveoli.

Criteria 3.2Summarise the role of enzymes in the digestive process

Using examples give a short account of the role of enzymes within the process of digestion. (300 words)

An enzyme is a recycled protein molecule which catalyses a specific reaction. Food and drink comprise large molecules and these need to be hydrolysed (in this case made smaller) so they can be absorbed/assimilated. Enzymes are used within the digestive system to provide cells with the fuel from the macromolecules (large molecules) of carbohydrates, proteins and fats they need to function properly. These are broken down in small units of amino acids, sugars and fatty acids which can penetrate the villi lining the intestine. 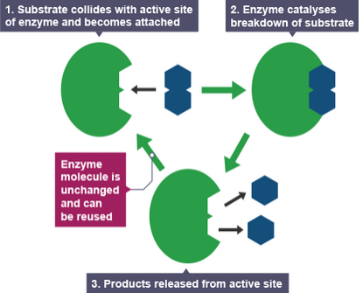 Figure 13: Diagram to show how the enzymes allow the substrate (the substance on which enzymes attach) to attach to the active site (where the molecules fit)

Digestive enzymes are produced in saliva in the salivary glands, the cells of the stomach lining, the pancreas in pancreatic juice and in the small intestine.

Salivary amylase in the mouth initiates the breakdown of starch, a type of carbohydrate. This must be broken down into monosaccharide as starch is a polysaccharide which the body cannot digest. This is called maltose and is eventually digested to glucose in the duodenum.

In the stomach lining gastric juice is secreted and contains the enzyme protease (pepsin). The enzymes digest protein macromolecules breaking them down into amino acids. They are assisted by hydrochloric acid which alters the pH to a pH which protease works best at.

Acinar cells in the pancreas produce the enzymes and a clear liquid called pancreatic juice which the enzymes need to be in to work. Pancreatic enzymes are: protein digesting proteases (e.g. chymotrypsin/ trypsin – broken down into amino acids); pancreatic amylase which digests carbohydrates (turns starches to sugars) and lipase (turns lipids to fatty acids and glycerol) which digests fats. The enzymes are secreted into the small intestine where they work with brush border enzymes:

The digestive system does not absorb food, it absorbs nutrients and enzymes facilitate this breakdown.

Criteria 3.3Explain how the digestive, cardiovascular and respiratory systems are

essential in providing the requirements for cell functioning

This unit discusses the system that supply the cell with everything that it needs. How do the three systems discussed function in supporting the cell?

In order that normal cell function be achieved the cardiovascular system:

The respiratory system delivers oxygen and removes carbon dioxide waste from body’s cells via cell membranes in the lungs (external respiration) and in body tissues (internal respiration). Oxygen is essential in cellular respiration which produces energy in cells.

The gastrointestinal system breaks down large insoluble molecules like proteins, carbohydrates, and fats into smaller soluble molecules like amino acids, sugars and fatty acids. These small soluble molecules can then pass across the small intestine walls and dissolve in the blood stream. Absorbed through the villi of the small intestine into the blood they can then be carried around the body to cells. The sugar molecules are used by the cells as a source of energy via cellular respiration. Whilst the amino acids and vitamins are used as a building block for other molecules.