In ancient India many herbal plant products were used for their medicinal values. Calotropis procera known as arka, madar, milkweed. It was used as antimicrobial, anti-fertility, anticancer, leprosy and antihelmintic. In the present study the ethanolic extract of the leaf was used to study for its spasmolytic activity.

The study was carried out in rabbit jejunum by standard bioassay. The response of Calotropis procera was observed at different concentrations. The responses of drug as well in combination with serotonin were taken and degree of inhibition noted. It was found that the ethanolic extract of c.procera produced significant inhibition of serotonin activity. This clearly signifies that Calotropis procera has spasmolytic activity. The leaf extract of plant can be used as remedy for spasmodic pains.

Over the past 10 year there has been a resurgence of interest in the investigation of herbal medicine as a source of new potential components for treatment of various human ailments1. The world of plants represents a virtually untapped reservoir of novel drugs awaiting imaginative and progressive organizations2. The medicinal potential of Calotropis procera has been known to the traditional systems of medicine and the plant is known as madaar in unani3. The plant has been well known in the Ayurvedic medicine, known as arka to be found sculptured on Shiva symbolizing mythological and medicinal value enjoyed by the plant in ancient India4. Plant is used in traditional medicine for its antimicrobial, anti-fertility, anticancer, leprosy and antihelmintic5. The leaves are reported to cure abdominal pains. The ethanolic extract provides a purified form of the ingredients in the plant and hence more appropriate6.

Rabbit as an experimental animal7,8:

The pharmacological activity of a biological compound can be carried out by bioassay experiments. The word bioassay is derived from two words bio meaning biological material and assay meaning assessment in laboratory8. The objective of bioassay are identification of various compounds, quantify the screening procedure and commercial production of the drugs. Isolated tissues from rats, mice, guinea pig and rabbit are commonly used in bioassay9,10. Rabbit jejunum is commonly used for its sensitivity in testing spasmodic activity, so rabbit jejunum was used to study the spasmolytic activity of Calotropis procera.

Rabbit is the animal model for these experiments, usually jejunum of the rabbit gives more consistent results as compared to the rest of ileum and also it is thicker piece as compared to the ileum11. Fasted rabbit is sacrificed and abdomen opened, the jejunum is identified, mesentery is removed i.e. washed with tyrode. a segment of jejunum is removed along with its accompanying section of mesentery and placed in a dish containing tyrode solution .a fine thread is tied to the apex of the mesentery and is led out on a bipolar stimulating electrode. This electrode is connected to a square wave pulse generator. One end of the tissue is tied to a tissue holder in tissue bath and the other to the lever12. Immediately provide tyrode with carbogen and temperature of 37 c and tissue is allowed to stabilize. Electrical stimulation of mesentery leads to stimulation of sympathetic nerve fibers which produces inhibition of the pendular movements13. Hence it is necessary to allow longer time for relaxation of .i.e. electrical stimulation is given at rate of 50 shocks/sec of 10 volts strength for 30 seconds duration.

Effect of C.Procera on rabbit jejunum

Set up an isolated preparation of rabbit jejunum as per standard protocol. Elicit responses to acetylcholine/histamine so that we can record maximum height of contraction. Add 10 mg of c.procera ethnolic extract of leaves and record its response. Similarly elicit responses to 5HT in presence of 0.1,0.2,0.3 and 0.4 ml of c.procera crude extract. Observe the degree of inhibition and calculate percentage of inhibition of 5-HT is related to c.procera crude extract. 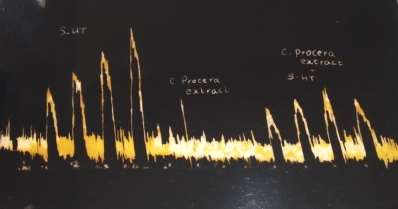 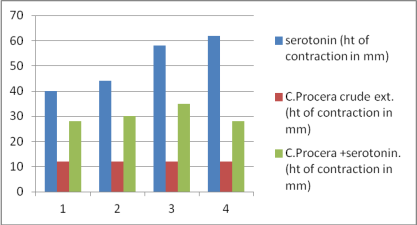 The present study was carried out to evaluate the direct effects of ethnolic extract of Calotropis procera leaves on rabbit jejunum in vitro experimental models. In contrast to the findings of effects on ileum, the ethanol leaves extract of Calotropis procera on rabbit jejunum produced antispasmogenic effect on gastrointestinal smooth muscles. Such a spasmogenic effect could have resulted due to presence of 5HT receptor blockade. The smooth muscle in contrast to skeletal muscle lacks visible cross striations because the contractile proteins actin and myosin are not arranged in a regular way, troponin is absent and sarcoplasmic reticulum is poorly developed. There are dense bodies to which actin filaments are attached. These bodies are present in the cytoplasm and also in the cell membranes

Observations and results showed, crude ethnolic extract of Calotropis procera leaves contain important active constituents like calotoxin, catotropin, triglyceride etc14. this evidence was confirmed by photochemical securing of respective extract. The 10ugm/ml of concentration of extract which inhibits the actions of serotonin probably due to calotropin like alkaloids of crude extract.

The 10ugm/ml of concentration of extract which inhibits the spasmodic actions of serotonin probably due to calotropin like alkaloids of crude extract. Thus our study shows that ethanol extract of Calotropis procera leaves produces an excellent antispasmodic effect on gastrointestinal smooth muscles of rabbit jejunum.