Using the Southern Blot Technique to Detect the Ultrabithorax gene in the Genomic DNA of the Drosophila melanogaster and the pET19 – Ubx plasmid Post Digestion by BamHI, NdeI, and BanII Restriction Enzymes

The Southern blot technique is used to detect targeted DNA sequences in DNA containing samples. In order to run the sample on an agarose gel the large sample of DNA is initially digested using restriction enzymes to provide smaller fragments of the DNA sequence. The loading dye serves as a label to detect the DNA fragments under a UV light to measure the band length of travel. In our specific experiment the Southern blot technique was used to detect the Ubx gene from the Drosophila melanogaster and pET19 – Ubx plasmid. If the restriction enzymes properly digested the the DNA from the Drosophila melanogaster fly, then under the colorimetric probe detection we are able to view and measure the band lengths to verify whether or not the Ubx gene is present in the DNA sample of interest. The experiment produced bands for the lanes loaded with the sample containing plasmid DNA, however bands for Drosophila melanogaster genomic DNA were not observed, but could potentially be due to a multitude of reasons discussed later, rather than the lack of genomic DNA being present altogether.

Edward Southern was successful in devising a method in which specific DNA sequences were detected to determine whether the sequence contained targeted genes of interest (Pattison, 2019). The Southern blot forms the basis of many different types of techniques used in the scientific community today, and although the need for using the original Southern blot technique to to single out the gene of interest in the DNA of an organism has lessened, majority of the modern day techniques are derivatives from the science behind the Southern technique.

The Southern blot technique also helps detect various genes specific to diseases that in turn allow for scientists and medical professionals to help with early diagnosis and understanding of the particular disease. One such usage can be seen in the 2015 study of Facioscapulohumeral dystrophy which scientists have learned can be identified by the lower count of D4Z4 arrays (Vasale et. al, 2015). Detection of this specific gene allows for medical professionals to diagnose patients with FSHD1 (Facioscapulohumeral dystrophy). The Southern blot technique has been an essential tool in this type of diagnosis to study the contractions of this particular gene on chromosome 4 (Vasale et. al,2015). Similarly scientists have used the Southern blot technique to learn more about diseases and disorders such as the Fragile X syndrome. The number of cytosine – guanine – guanine set has been directly linked to the likelihood of this syndrome being present in a patient (Chen et. al, 2010). Although currently scientists are working on using PCR technology in hopes of attaining for accurate data in a more efficient manner, the Southern blot technique has formed the basis of the current knowledge base about the disorder. The Southern blot technique has not always remained the same in laboratories. In fact, many scientists use hybridized versions of the technique for certain studies. One such study was conducted in 2013 to study a C9ORF72 locus containing a repeated hexanucleotide expansion of GGGGCC (Buchman et. al, 2013). A hybridized Southern blot protocol was used in hope to combat the limitations presented by the basic technique and PCR protocols. The study was conducted in hope of attaining a better understanding of the gene, since its presence had previously been noted in a significant number of patients with amyotrophic lateral sclerosis (Buchman et. al 2013). The Southern blot technique forms the basis in advanced knowledge regarding the diagnosis and treatment of many diseases such as these, and through hybrid versions and techniques based off the Southern blot, the field of biology is growing its knowledge base  every year.

This experiment was conducted in order to understand the fundamentals behind the Southern blot technique and to detect the Ultrabithorax gene of the Drosophila melanogaster fly and the pET19b – Ubx plasmid. In order to prevent non specific binding from the probe, dried milk was used – which resulted in the specific binding of DNA sequences and the probe. It was hypothesized that the Drosophila melanogaster genomic DNA would not present bands in the lanes that contained genomic DNA because the bands are too large to present themselves on the gel. The plasmid DNA, however, was predicted to present bands in the wells loaded with this sample. Using digoxigenin helps detect the Ubx gene on the Southern blot, which can in turn allow for determination of whether or not Ubx is present.  The probe sequence that was used for the experiments is as follows:

Table 1: These are the band sizes that can be expected when using the various different restriction enzymes to cleave pET19 – Ubx plasmid.

All materials and methods were conducted according to Dr. Pattison’s protocol. The protocol is cited as follows : Pattison, D. 2015. Southern Blotting:  Detection of the Ultrabithorax (Ubx) gene of Drosophila melanogaster. Houston: University of Houston. It is important to note the probe sequence for the protocol and for this experiment the sequence was:

Certain deviations were taken from the protocol. The wells designed for the agarose gel had smaller comb sizes, and therefore 15 µl of solution from each tube were added into the wells instead of the 20 µl stated in the protocol. Certain deviations were also made to the part of the protocol pertaining to the colorimetric probe detection method which are as follows. The protocol calls for the use of 100 ml of each type of buffer used to wash the membrane, but instead 40 ml were used to wash the membrane with Buffer I, Buffer II, and the wash buffer. Along with this, the antibody/enzyme solution (at a ratio of 1/5000 concentration) amount was lessened from 40 ml to 32 ml that were used. The agarose gel is stated to be 0.8 % in the protocol, but in the experiment we used a 1% agarose gel instead.

The purpose of this experiment was to detect the UBX gene in D. melanogaster using the Southern blotting technique. Figure 1 displays the results when the samples were run on a 1% agarose gel. The expected band sizes are written for lanes 5, 6, 7, and 8. Starting at land 5, there was a band at 6882 base pairs when BamHI was used to digest the pET19 UBX in lane 5. In lane 6 the band size was 1123 base pairs which contains BanII to digest pET19 UBX, 845 base pairs in lane 7 with two restriction enzymes which were BanII and NdeI. Lastly, lane 8 contained BamHI and NdeI to digest the pET19 UBX DNA which appeared at band size 1177 base pairs. The smear that formed in lanes 2-3 was expected due to the amount of DNA loaded in the wells. At the bottom of these three lanes there are RNA fragments which we don’t account for because our focus are the DNA fragments. 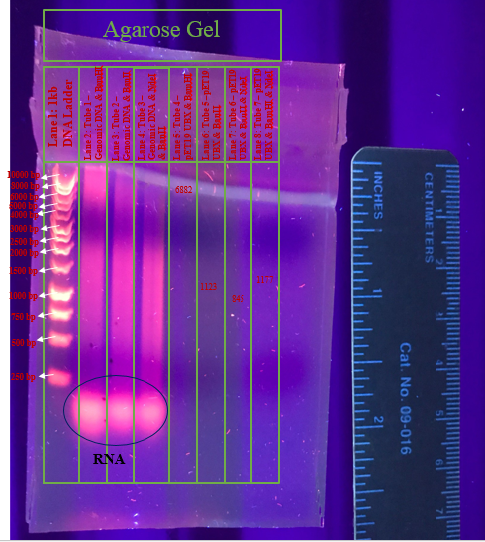 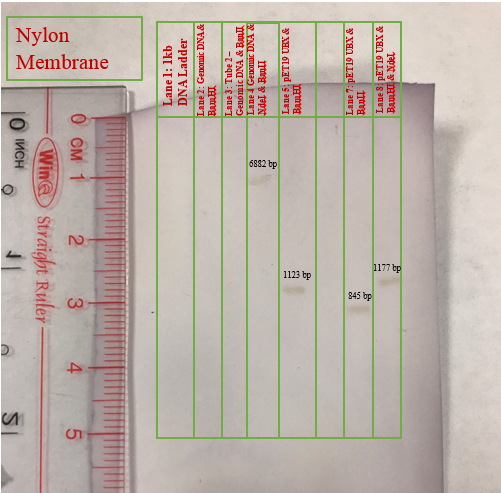 Our predicted hypothesis was correct in that no visible bands were seen in the region of the gel where Drosophila melanogaster genomic DNA was loaded, but bands were observed in the region of the gel where plasmid DNA was loaded into the wells. After we ran the gel, there was an observable smear in lane 2, lane 3, and lane 4. Although there are no visible bands present, this does not necessarily mean no genomic DNA is present, rather the genomic DNA bands from the Drosophila melanogaster are too large to be visible on the gel.

The noticeable smear on the gel could be present due to a wide array of reasons. While transferring the samples in the tubes into the wells, the protocol had directed us to add 20 μl of the sample from the tube into the wells. Although we did this for the first and second lane, we realized that this was causing the wells to overflow and opted to deviate from the protocol and start adding 15 μl instead. This overloading of the wells could potentially cause for the smear observed on the gel. This could potentially pose to be an issue since there is a chance that not enough DNA plasmid is being transferred into the wells from the tubes. The wells that were loaded with 20 μl caused for an overflow and resulted in a minute immeasurable amount of sample to flow into the buffer. Since we saw bands on our membrane, it is safe to assume that DNA was present, but not in enough quantity to show bands on the gel for the lanes that contained pET19 – Ubx.

To conclude, we were successful in using the Southern blot technique to detect the Ubx gene the pET19 – Ubx plasmid. With the exception of a few errors and unexpected deviations that we were forced to make while conducting the experiment, we were successful in following the protocol and being able to observe bands on our membrane. The plasmid was cleaved as expected, and the size of the base pairs were as predicted. In the future researchers could potentially design experiments based on this protocol that can help detect certain DNA fragments that are found to be common in cancer cells, and in turn could help answer some hanging questions the scientific community has regarding this disease today.