Objective; To know about the frequency of complications due to silicone oil used for internal temponande in the treatment of retinal detachment

Methodology ; This cross sectional study was conducted in ophthalmology department of Lady Reading Hospital Peshawar from Jan 2013 to May 2014 with total duration of 1 ½ year. Data collection process was started in all those patients who were admitted in the mentioned duration with retinal detachment due to myopia, pseudophakia, trauma in which silicone oil was used in it for internal temponad and documentation was done according to the preformed Proforma including age, gender, etiology and complications while excluding the patients having less than or equal to 15 years and greater than 70 years, fresh retinal detachment. Data was analyzed from different angles by SPSS software and represented in the form of charts and graphs.

Results; Total 300 patients were included in this study in which 190 (63.33%) Were males while females were 110(36.67 %) having age range from 16-70 years and mean age was 40 ±5SD. Regarding etiology of retinal detachment the most common cause was trauma having 170 (56.66%) while least common was aphakia due to which 40 (13.33%) cases were documented. The most frequent complication was cataract formation noted in all 300 (100%) cases followed by increased intra ocular pressure present in 210 (70%) cases and minimum cases were that of prolapsed of uveal tissue through pars plana having frequency of 1 (33%).

Conclusion; The most common etiology of retinal detachment is trauma occurring in middle age males and when silicone oil is used for internal temponande in its treatment cataract formation occurs in almost all cases followed by increased intra ocular pressure and minimum cases were that of prolapsed of uveal tissue through pars plana.

Patients typically will present with symptoms such as light flashes, floaters, peripheral visual field loss, and blurred vision 4. Patients of retinal detachment are diagnosed by history , examination , binocular indirect ophthalmoscopy with scleral indentation and B scan is performed in the cases when there there is no fundus view 5. The main principle of retinal detachment is to close all retinal tears and reapproximate strongly chorio retinal layers in order to prevent it from again breakage and new holes formation. It is treated surgically by two approaches which of one is called external approach which is done by sclera indentation by using silicone material and is indicated for uncomplicated retinal detachment. The second approach is called internal approach by doing vitrectomy and using silicone oil and Long-acting gases in order to provide temponande effect to detached retina. It is indicated for complicated cases such as those with PVR,â€‹ giant retinal tears, coloboma choroid, penetrating ocular trauma, etc 6,7 .

Silicone oil application mainly serves two functions. The first is the displacement of the retina toward the eye-wall by its surface tension effect and volume displacement, and the second to a lesser degree is the temponande of the superior retina by its bouyancy force 8.It is transparent, lighter than water (specific gravity of 0.97) and has a refractive index of 1.404. The silicone oil has a surface tension with water of 40 mN/m, which is less than that of a gas bubble 9. Although silicone oil has many advantages but it is not free of complications in which important are Cataracts , band keratopathy,Recurrent detachments , pupillary block glaucoma, closure of the inferior iridectomy, fibrous epiretinal and subretinal proliferations, pain , subconjunctival deposits of oil, Increased intraocular pressure (40.57%), changes in refractive status etc 9,10 .

Rationale of the current study is to know about the frequency of complications which occurs due to usage of silicone oil for temponande effect in internal approach for retinal detachment. This study is important for creating local statistics of the problem due to silicone oil and to see whether these are comparable to that of international studies. Further more it will open a gateway for future researchers on this topic and this will be a step for patients betterment and care.

This cross sectional study was conducted in ophthalmology department of Lady Reading Hospital Peshawar from Jan 2013 to May 2014 with total duration of 1 ½ year . After taking consent from ethical research committee data collection process was started in all those patients who were admitted in the mentioned duration with retinal detachment due to myopia , pseudophakia , trauma in which silicone oil was used in it for internal approach and documentation was done according to the preformed Proforma including age , gender, etiology and complications while excluding the patients having less than or equal to 15 years and greater than 70 years, fresh cases of retinal detachment . Data was analyzed from different angles by SPSS software and represented in the form of charts and graphs.

All the patients were undergone through thorough history, detailed clinical like visual acuity, pupillary reflex for presence or absence of RAPD, measurement of intra ocular pressure and fundus examination to locate the tears and viability of the retina. B scan was performed when there was no fundus view. Before surgical intervention patients were subjected to pre-operative preparation, random blood suger level , viral serology (HbsAg and Anti-HCV Ab) was done . Surgical disposables were arranged accordingly. An informed consent was taken, explaining the prognosis. All the patients were followed till to 6 months post operatively for complications of silicone oil by repeated follow ups at regular intervals and by doing measurement of IOP, visual acuity and fundoscopy at each visit. The ethical approval was taken from the hospital ethical committee, “Postgraduate Medical Institute, Institutional Research and Ethics board”. Frequency of complications due to silicone oil used for internal temponande in the treatment of retinal detachment was revived.

When patients were followed for 6 months after using silicone oil for retinal detachment we found that cataract formation was the most common complication which was present all 100 % cases followed by rise in intra ocular pressure in the same eye having frequency of 210 (70%). Regarding recurrence of retinal detachment it was present in 78 (26 %), emulsified oil in anterior chamber was present in 10(3.33%), while band keratopathy, blocked ando’s iridectomy, pthysical eye were 5(1.66%) for each of the three.

Minimal frequency was noted for silicone oil under the sclera and prolapse of uveal tissue through pars plana which were 2 (.66%) and 1 (.33%) Fig no 3. 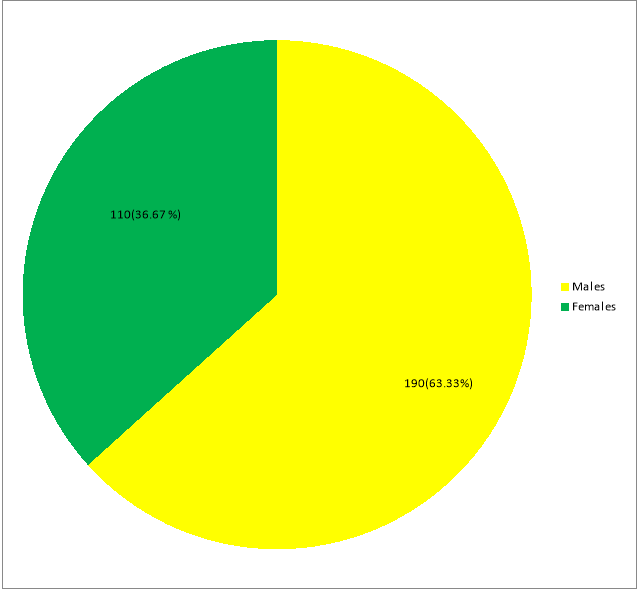 Fig no 2;- causes of retinal detachment in which silicone oil was used for temponande effect in treatment N=300 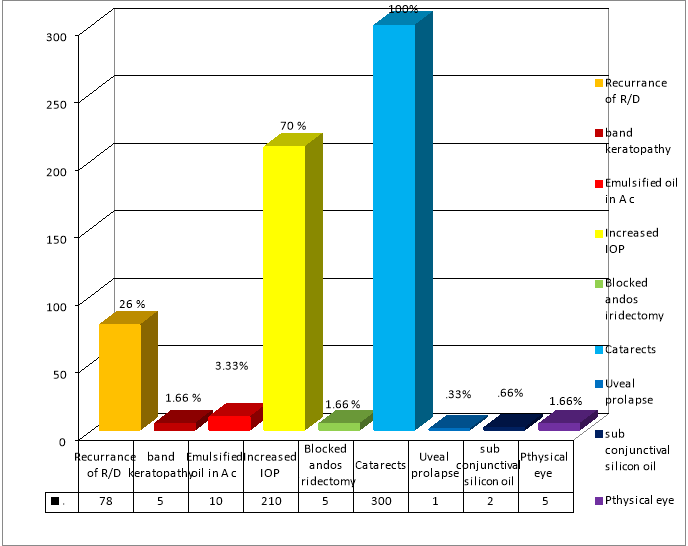 Since the introduction of silicone oil, there have been multiple controversies concerning the safety of silicone oil for intraocular use. For of these reasons, removal of silicone oil is typically advocated. Prolonged silicone oil temponande has been demonstrated to induce multiple anterior segment complications including cataract, glaucoma, and keratopathy15,16 . In our study total 300 patients were included in 1 ½ years duration with male predominancy having total 190 cases and females having 110 cases with males; females 1.72;1. Study conducted by Khoroshilova-Maslova IP11 et al showed that males are effected more than the females by using silicone oil in retinal detachment which is according to our results. Similarly in many other international studies 12, 13,14 males are effected more than the females from silicone oil. In our study age range of 16-70 years with mean age 40±5. Study conducted by Hassan MU et al 10 has showed in their study that patients which were suffered from the complications of silicone oil during internal approach for retinal detachment were in the age range of 45-83 years with mean age of 58.33 ±7.12 SD years.

Our region has suffered more from terrorism as compared to the other parts of the world therefore most of our patients were brought with blunt trauma to the different body organs including retina with bomb blasts injuries. The second reason for difference in the percentages of etiologies is that majority of the population in our region have low educational status as compared to Punjab and other parts of the country/world due to which peoples suffer more from RTA,s and social crimes. When we followed our patients till to the 6 months post operatively for the complications of silicone oil which was used to provide internal temponande for retinal detachment we found that the most common complication of it was cataract which occurred in all 100 % cases followed by increase in intra ocular pressure which occurred in 210 (70%) and then recurrence of retinal detachment having frequency of 78(26%) of cases, emulsified oil in anterior chamber in 10(3.33%) , while band keratopathy, blocked andos iredectomy and physical eye each of the three had 5(1.66%) cases and minimum number of cases were due to uveal prolapse.

Conclusion;- In our set up retinal detachment mostly occurs due to trauma in young to middle age males. When silicone oil is used for internal temponande effect during internal approach for retinal detachment then it provides good results in terms of reattachment but the visual outcome can be comprised due to multiple factors like cataract formation, increased intraocular pressure etc.