A brief description, including an aim of your investigation, details of your chosen area(s), sampling technique and the scientific names of the organisms investigated.

2. Biology of the Ecological Community

Information about the organisms in the community you investigated. Describe the ecological niche and adaptations of at least two species, and relevant interrelationships between these organisms.

The aquatic mayfly nymphs have distinctive, leaf-shaped appendages on the sides of their abdomen that serve as gills for the exchange of respiratory gases.Three Life Stages: egg-aquatic nymph, and adult cycle which includes two phases: (subimago) dun and (imago stage) spinner

Caddisflies are related to Lepidoptera and resemble small hairy moths, but their wings are covered in dense hairs rather than scales and they lack the typical curled proboscis of most moths and butterflies. They are mostly dull-coloured and range in size from 2-40 millimetres in body length. Caddisflies are recognisable by the following features:

2 pairs of membranous wings that are of differing size

Wings covered in fine hairs. Wings form a roof over the abdomen when at rest

Larvae are all born and found in the water since their aquatic and the adults are predominantly found on land. Adults are nocturnal and found on tree trunks resting

Description of the abiotic factors found in the area you investigated.

At the place of our investigation we had a look at the abiotic factors in the area there were tall trees blocking sunlight from hitting all of the river which creates an increase in oxygen because it’s colder but in the sunny spots the water temperature increases which causes’ the solubility of oxygen to decrease.

The speed of flow with a tape measurer, a stopwatch, and a ball and timed how long it took to travel 10m from point A to B.

The PH using a ph measurer.

In the sunlight the temperature was 17.6 and 18.1 in the fast flow area

Note any interrelationships you may consider of the organisms to be studied. Consider predators, herbivores, competition and mutualism.

During our investigation on biotic factors we noticed that we were catching a high number of Caddisflies and mayflies in both slow and fast flow, which showed us

5. Diagrams/pictures of your sampling site.

A picture of our fast flow area where we did all of our test for fast flow. 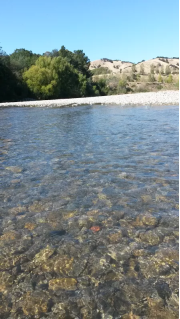 A picture of how slow flow area where we did all of our test for slow flow.

Presented in a table and graph which is appropriate and enables you to clearly show and the distribution pattern of your chosen organisms in the ecological community. 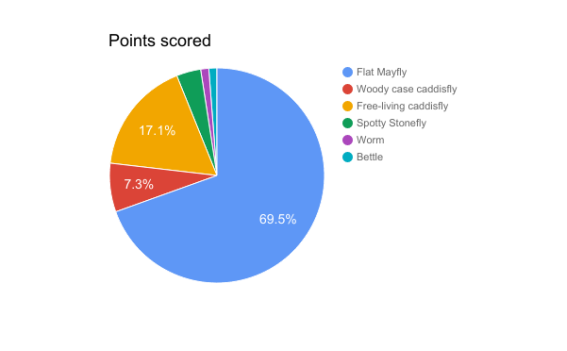 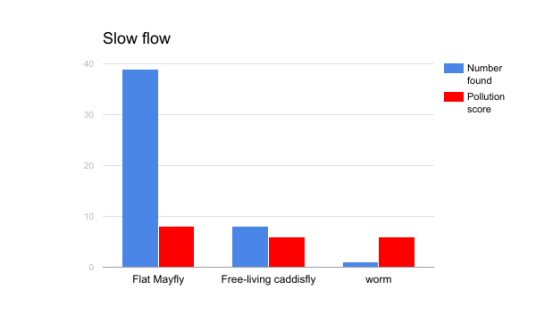 Explain why the population distribution pattern you have observed and described occurs.  Relate the pattern in the community to the biology and adaptations (structural, behavioural or physiological) of the two organisms studied.  Discuss how environmental factors (abiotic and biotic) might affect the organisms in the community, and how this relates to the observed distribution pattern, or absence of a pattern. This could involve elaborating, applying, justifying, relating, evaluating, comparing and contrasting, and/or analysing.  In your discussion, include interrelationships between organisms in your ecological community.

With Caddisflies and Mayflies we saw that they didn’t bother each other when we had them in the sampling container but they do compete for the same food because the both species eat algae and there would be a competition for the food. One thing we did notice was a larger population of Mayflies compared to what we caught in the way of Caddisflies. Due to the significant amount of Mayflies we suspect that because of the pollution score being up at 8 that it’s a bit too much for the Caddisflies to be able to live in with a higher population number. Another thing is a big predator to a Mayfly is a stonefly and we didn’t see a lot of Stoneflies in the stream so the Mayflies are either dominant or the stoneflies just can’t survive in that particular area because of their pollution level being down at 5. In conclusion I have realised that the higher the pollution number in an area i.e Mayflies being up at 8, they would then have a higher population were as if it’s a low pollution score i.e stonefly being down at 5 then there isn’t such a big population.

A small sample of a food chain in a stream:

A couple of biotic factors are: other organisms, competitors, predators herbivores and prey.

These are the sources used to find most of my research.