Mathematical Modeling of the Role of Thyroxin in Mammalian Brain Development

It has been well-established that thyroid hormone plays an essential role in the mammalian brain development. More specifically, Thyroxin (T4) is partially de-iodinized to tri-iodothronine (T3) in brain cells. The T3 acting through the nuclear receptors, Thyroid Receptor Hormone, serve as activating factors for certain downstream genes like Ser3 and hairless that play vital roles in the proper brain development in the mammalian fetus including having involvement in cell differentiation and migration, myelination and signalling.

Synaptotagmin-related gene 1 (Srg1) is one such novel thyroid hormone-responsive gene, which might possibly have a role in synaptic structure maintenance and/or activity[2].

Hairless, on the other hand is a transcriptional cofactor that may possibly influence the expression of other genes that respond to thyroid hormone[1].

Ser3 catalyzes the first step in serine biosynthesis, amongst having other roles[3]. This particular gene has been chosen for inclusion in our system because of the recently identified role of L-serine in proper functioning of central nervous system (CNS)[4].

Thyrotropin releasing hormone (TRH) is a functional neurotramsmitter in the CNS of mammals and can also modify the tasks that the CNS performs.

The entire pathway we are observing can be broken down into the following two parts:

This has been clearly depicted in the wiring diagram in Figure 1. 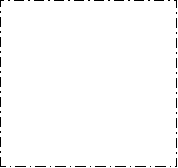 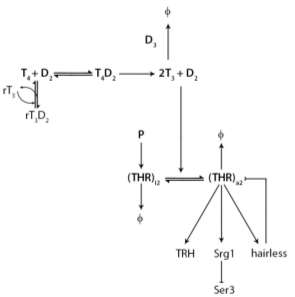 Despite the simplicity of the pathway it has never been modeled in its entirety before, which was partly the inspiration behind choosing to model using a Systems’ approach. Moreover, the steps of this thyroid hormone pathway can be dissected and analyzed using a broad range of topics studied in the Systems’ Biology course, including Michaelis Menton Kinetics and Boolean Networks. Hence, the project will serve as a platform to demonstrate our all-inclusive understanding of the concepts learnt in the course by practically applying combinations of these techniques to the system chosen.

At a more macroscopic level, modeling of this system can unveil possibilities of developing a deeper understanding of the system dynamics of this thyroid hormone pathway, and an insight into its various potential targets. Analyzing these targets can thus help uncover potential drugs or treatments for various diseases or disorders resulting from improper brain development such as the Pendred’s Syndrome, the Grave’s disease and other psychiatric disorders like Cerebral Palsy, related to hyperthyroidism and hypothyroidism. 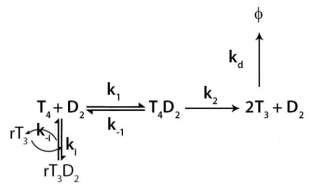 Figure 2: Wiring diagram of conversion of T4 to T3 under competitive inhibition

Having found parameters (ki’s and km’s) from literature using experimentally derived values(8-11), we plotted the trajectories of substrate (T4), enzyme (D2), ES complex, inhibitor (rT3D2) and the IE complex using ODE’s. The ODE system for the dynamics of this reaction reads:

Following are the trajectories obtained: 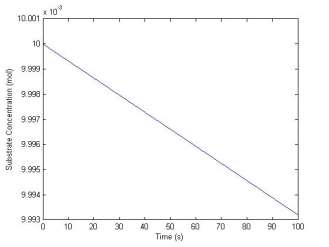 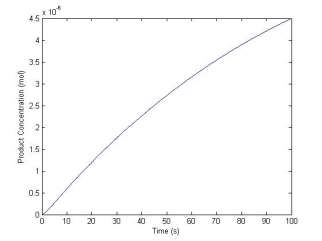 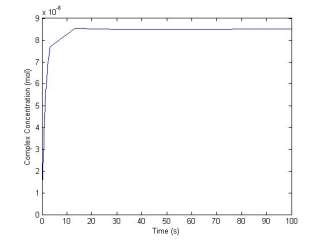 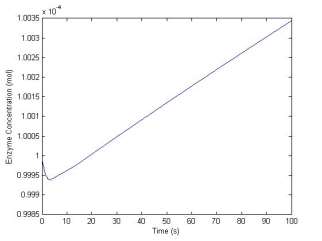 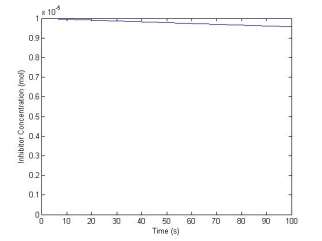 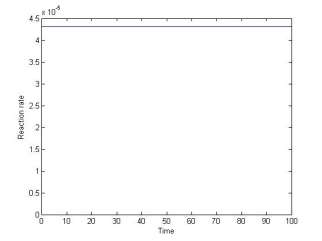 We took a closer look at the T3’s interaction with its receptor. The mechanism is shown below in figure 4: 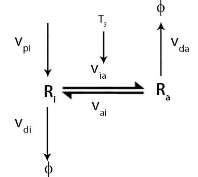 Using the following ODE’s in ODE45 we modeled this interaction and obtained figure 5 shown below: 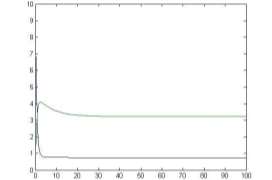 Using the formula 2N, with N indicating the number of involved genes/nodes, we generated 25=32 possible states at time ‘t’ using a method of recursion in MatLAB.

The rules used for generating successive states were devised as follows:

The rules were applied 20 times to observe patterns in successive states and analyze the states where the system might have converged. However instead of forming a few stable states, our system in fact formed a basin of absorption including the following states:

A directed graph for the gene regulation pathway was constructed as follows:

Next, a Baysian network was constructed for the gene regulatory pathway.

The dependencies of genes are indicated for by the following conditional probabilities:

We proceeded to study the transcription of the thyroid hormone response genes, the activator and the repressor.

From figure blah we inferred the basal level mRNA synthesis of T3 responsive genes is approximately 25au, the level of repressor expression is around 2-3a.u. and level of activator expression is 35a.u. 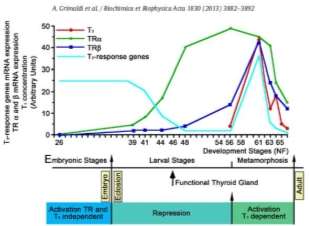 Next, in order to calculate the rate of transcription we used the following equation:

We could not, however calculate the propensities due to time constraints on this project, and also because having research on neural cells, we discovered that the volume of neurons has been expriementally measured to be 5964µm3 [6] , and therefore we cannot approximate deterministic rate constants to stochastic propensities because volume is not equal to 1. 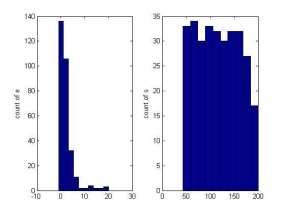 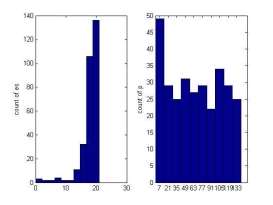 Due to lack of parameters for the production and degradation of thyroid hormone receptor in active and inactive states, our model did not obey conservation principle of number of receptor molecules as indicated in figure 5.

Our Boolean network results indicate that our gene regulatory pathway forms a basin of absorption which includes the following states:

These states can be potential targets of further studies in this field.