What is RNA interference (RNAi):

A method of silencing or blocking the function of a gene by introducing the short sequenced RNA resulting in transcriptional inhibition or no protein production.

Classes of RNAs involved in RNAi:

Proteins or enzymes involved in RNAi:

a) helicase domain at N-terminal: its function is still unknown.

b) c-terminal dsRBD (double stranded RNA binding domain): it binds the dsRNA but specific site of binding is not defined.

c) Two RNase-III domain: involves in cleaving the strands of dsRNA, results in shortening of dsRNA. 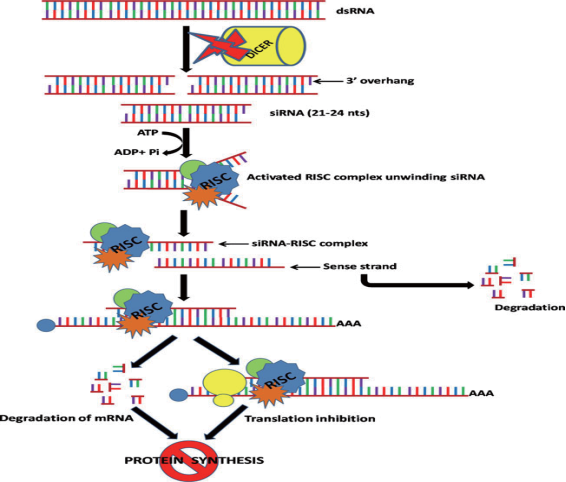 After identification of suitable genes, specific vectors are prepared for constructing transgenic plants using RNAi. It is done by:

Step 3: Transformation of vectors in plants and their screening:

Applications of RNAi in improving crops

Altering the architecture of plant: Architecture of plant likes its height, elongation of stem, branching of roots, morphology of leaf and inflorescence are important for plant physiology, yield, biochemical process and its to resistance for environmental stresses. Bu now, plant architecture are modified by using technology of RNAi for improving the productivity of plants. e.g. RNAi decreased the expression of gene OsGA20ox2 in rice, this enzyme encodes GA 20-oxidase, involves in the synthesis of gibrellins (GAs) which are biologically active in the plants. so, transgenic plants with suppressed OsGA20ox2 produced low content of GA1, decreasing the height of plant, resulting the phenotype which is semi-dwarf. Semi-dwarf plants shows more productivity, shorter stems and resistant than wild plants.

Tolerance against biotic stresses: biotic factors (viruses, nematodes, fungi etc) contribute to the maximum loss of plant productivity especially viruses, and their control is also difficult. But antiviral activity of RNAi plays important there. E.g. papaya fruit plant which is a major source of enzyme papin is affected by the attack of viruses. Transgenic plants are produced which have gene of coat protein, resistance to attack of virus.

Removal of allergens: hypersensitivity in response to normal harmless food due to role of IgE is known as food allergy. Some allergies due to food are very severe and even threatened for life. Food allergies must be avoided as there are no medicines for them. RNAi also plays an important role there. E.g. soybean is legume plant and is allergic due to Gly m Bd 30 K protein. Transgenic soybeans have been produced in which this gene is silenced, with no harms of allergy.

Flower scent and color modulation: horticultural trait such as scent and color of plants contribute to economic as well as aesthetic value. Garden plant flower color was modulated by using the technique of RNAi against CHs (chalcon synthase) gene.

Shelf-life prolongation: vegetables and fruits shelf life is increased to reduce the deterioration and the senescence of the fruit to reduced spoilage and quality of food in order to store and transport safely. e.g. shelf life of tomato plants was increased by using RNAi

Development of seedless fruits: character of seedless fruits is greatly appreciated for their freshly consumption and also for processing the fruit products. It increase the quality of food as hard seeds gave bad taste. RNAi technology is now used for production of seedless fruits (especially watermelon, guava tomato and apples). e.g. by using RNAi seedless tomatoes are produced by suppressing the ARF7 gene.