Abstract: Anthropogenic development has been a major drawback due to the increased discharge of heavy metals into the environment containing the saturated and unsaturated zones of soil. Heavy metals are those which have density more than 5gram per cm cube. Lead causes major health hazards like Plumbism (lead poisoning) at higher concentrations. In the present study the ability of Alternenthera versicolor to phytoremediate toxic lead contamination was assessed at different concentrations of lead. To enhance the uptake capabilities of Alternenthera versicolor, bacterial organism capable of lead degradation was supplemented. The samples were uprooted at an interval of 10, 20 and 30 days. The uptake of lead was assessed by AAS, chlorophyll and anthocyanin content was also checked. Further the effective strain were characterised by 16s rRNA sequencing.

The most common heavy metals found in hazardous sites are Lead(Pb), Copper(Cu), Chromium(Cr),Nickel(Ni) and Zinc(Zn).Ionic and hydroxide forms are the general forms of these heavy metals found in soil, ground water and surface water (Gade,.2000). Heavy metal contamination is a major concern because they cannot be degraded (Lone et al,. 2008). Plant growth promoting rhizobacteria are heterogeneous group of bacteria that can be found in the rhizosphere, and in association with roots. The plant-bacteria synergistic interaction in the rhizosphere is determinants of plant growth and fertility. These involve the ability to produce indole acetic acid which is an important growth regulatory hormone, to produce siderophores which enable the uptake of solubilised mineral phosphate from the soil, HCN production and Ammonia production. Morphological studies involve the root and shoot length. Hence depending upon the results obtained for each concentration, we can determine the maximum concentration at which the bacteria can withstand lead contamination. Thus the present study involves the phytoremediation of lead supply by Alternenthera versicolor followed by the rhizoremedial clean up by the synergistic interaction between the effective rhizobacterial isolate and the plant.

For the isolation of lead degrading bacteria, tannery sludge was collected from four locations in Vellore, Tamil Nadu, India. All the samples were collected using sterile polyethylene bags and were preserved immediately (McGrath et al,. 2001).

The effective isolates obtained from the tannery sludge sample, were screened for its PGPR traits.

For estimation of IAA production, the method described by (Gordon et al, 2000). was followed. The isolates were inoculated in Nutrient broth and were incubated in the shaker at 120 rpm for 24hours. 100 µl of inocula from overnight culture of NB was inoculated in MS Media that was supplemented with 5mM L-tryptophan and was incubated in shaker for 48hours. The cultures obtained were centrifuged at 10000 rpm for 10 minutes. 2ml of supernatant was taken and few drops of Salkowski’s reagent was added to it. Optical density was taken at 530 nm using spectrophotometer. (Hussain et. al,. 2013)

For the detection of phosphate solubilising capability of the effective isolate, Pikovskaya agar media was inoculated with effective isolate and zone of inhibition was observed after 4 days incubation at RT. (Hussain et. al. 2013)

For growth kinetics study, seed culture of the effective isolate VITPSS1J was prepared in MSM. 2% inoculum of 0.5 OD culture was added in LB broth. O.D readings were taken at every 30 mins till stationary phase was achieved and a plot was plotted against O.D. and time interval.

64 pots were prepared each consisting of one control and three test pots (Cosio et al, .2004). 2 kgs of sieved garden soil was used to plant Alternanthera versicolor plantlets (20 cm in length) in each pot. Pots were placed in greenhouse for 10 days for the plantlets to get adapted. The pot culture sets were prepared according to two criteria: 1. According to various concentrations of lead being added and 2. According to the number of days of study (10, 20). After the adaptation was completed, various concentrations (25mg/L, 50mg/L, 75mg/L and 100 mg/L) of lead was added at regular interval. 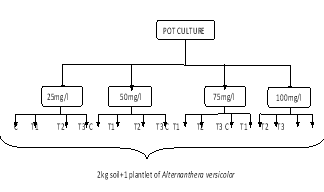 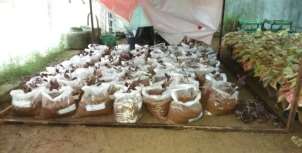 Seed culture of effective isolate VITPSS1J was prepared in Nutrient broth (incubated at RT for 24 hrs). The bacterial culture was further mass multiplied by inoculating 100μl of seed culture into 4 Erlenmeyer flasks, each containing 250ml NB. 10 ml of this mass multiplied culture was added to each pot and left for next 10 days (Hussain et al,. 2013).

After 10 days, first set of plants were uprooted from the pots (10th day pots of all concentrations).

Further studies were carried out on the uprooted plants in order to study the uptake of lead by these plants in association with bacteria in 10 days.

Anthocyanin is a pigment responsible for the red, purple, blue colour of several fruits and vegetables, cereals and grains. Anthocyanin can also be used as a pH indicator. Each plant was studied for the amount of anthocyanin present. The leaves of a plant were taken and ground with 70% ethanol and 7% acetic acid (in the ratio 3:2) in a mortar-pestle and transferred to Falcon tubes. Sterile water was added in all tubes including the controls. The tubes were kept in rotary shaker for 10 minutes and then centrifuged (15 mins, 4ºC, 4500 rpm). The supernatant was removed and 400 µl of methanol was added in each tubes. The anthocyanin content was measured by taking the UV spectrophotometric reading at 530 nm and 657 nm. The same procedure was followed for all the 12 plants.

Each plant was also studied for determining the chlorophyll content. The leaves were cut into small pieces and mixed with 70% ethanol and ground using mortar-pestle. The mixture was then transferred to Falcon tubes and centrifuged at 6000 rpm for 10 mins. Supernatant was used for spectrophotometer assay of chlorophyll at 665nm and 652 nm. 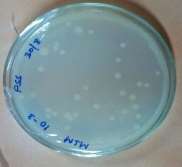 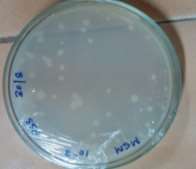 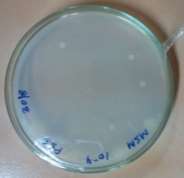 B. PGPR analysis of isolates 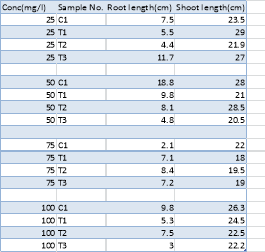 Table 2: Root and shoot measurement after 10 days of observation 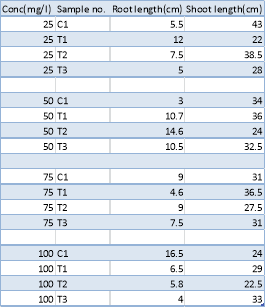 Table 3: Root and Shoot measurement after 20 days of observation

Anthocyanin is a pigment responsible for purple, blue colour of several fruits grains and flowers. Chlorophyll is a pigment which provides green colour to the plant. (Table 3, 4) 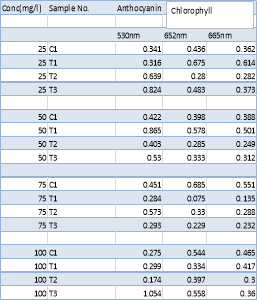 Table 4: Anthocyanin and Chlorophyll estimation after 10 days of observation 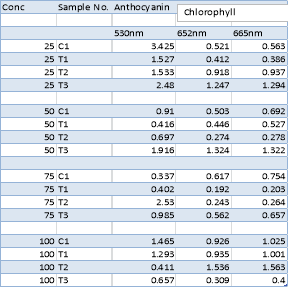 Table 5: Anthocyanin and Chlorophyll estimation after 20 days of observation 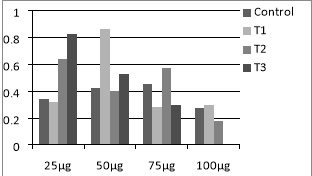 Figure 1 Estimation of anthocyanin after 10 days of observation 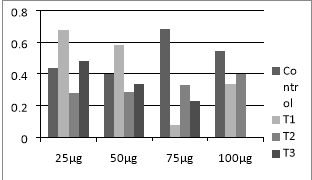 Figure 2 Estimation of chlorophyll b by using spectrophotometer (652nm) 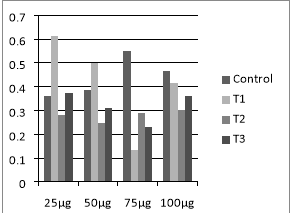 Figure 3Fig 5: Estimation of chlorophyll a using spectrophotometer (665 nm) after 10 days of observation 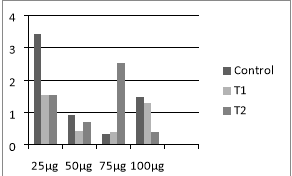 Figure 4. Estimation of Anthocyanin after 20 days of observation

Figure 5Fig 7: Estimation of chlorophyll b by using spectrophotometer (652 nm) after 10 days of observation 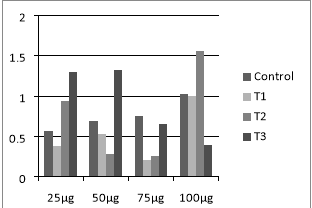 Figure 6Fig 8: Estimation of chlorophyll a by using spectrophotometer (665 nm) after 20 days of observation

The present study deals with rhizoremedial treatment of the plant Alternenthera versicolor using bacterial isolates of tannery sludge. The plant has been tested as a hyper accumulator of lead which is a toxic heavy metal. Many plants have been worked upon for phytoremedial and rhizoremedial studies using n Alternenthera versicolor different heavy metals such as isolation of potent PGPR isolate; tannery sludge was serially diluted and plated onto MSM agar plates. Carassco et al,.2005 also isolated lead degrading bacteria using Nutrient Agar Medium. Alternenthera versicolor was tested for its ability to be proved as a potent hyperaccumulator of lead. Hyperaccumulators are plants that have the abilities to take up higher concentration of toxic contaminants or compounds. Some of the hyperaccumulators already proved are Agrostis castellana (McCutcheon et al,.2003), Brassica juncea (E.lombi et al,. 2001), Brassica napus (McCutcheon et al,. 2003), Helianthus annuuus (Schmidt et al,.2003). The ability of VITPSS1J to act as a potent PGPR isolate was assessed. VITPSS1J was found to be positive for Indole Acetic Acid production (Hussain et al,.2013), but it showed negative result phosphate solubilizing agent, indicating it has effectiveness as a PGPR organism. Alternenthera versicolor was tested for its ability to phytoremediate toxic lead concentration at 25mg/L, 50mg/L, 75mg/L and 100mg/L concentrations of lead. Earlier reports have suggested the use of Brassica juncea as a potent hyper accumulator for lead. Thus shoot and root length was checked at regular interval and it was found be similar as compared to the control; suggesting the effectiveness of Alternenthera versicolor in remediating lead contamination.(Hussain et al,. 2013). Anthocyanin and chlorophyll estimation also suggest the similar result as anthocyanin and chlorophyll content of a plant are a major indicating factor for its toxic uptake studies. Higher level of anthocyanin and chlorophyll at day 10 and 20 suggest that toxic effect of lead has been neutralised by various mechanism taking place in the plant like phytostabalisation and phytovolatalisation (Irene Kuiper et al,.2003).

Thus the present study proves that Alternenthera versicolor can be used as a hyperaccumulator of lead at concentration ranging from 25 to 100 mg/L.

11. A. Rehman, S. Ashraf, J. I. Qazi, A. R. Shakoori (2005) Uptake of Lead by a Ciliate, Stylonychia mytilus, Isolated from Industrial Effluents: Potential Use in Bioremediation of Wastewater75:290–296