Cattle are susceptible to a wide range of genetic diseases. The majority of inherited genetic diseases recognized in cattle are autosomal recessive, mainly due to the practice of “line-breeding”. The defective calf receives error gene inherited from both its sire and dam. However, if the inherited mutant gene comes from only one parent, such individual usually turns out to be a carrier of the disease without any symptoms (Patel, 2010). Genetic abnormalities contribute to poor performance and structural unsoundness to semi-lethal and lethal diseases.

Since most genetic diseases are breed-specific, artificial insemination a widely used technique for cattle breeding may lead to high levels of inbreeding and an inevitable increase in the prevalence of recessive defects. Hence, it is imperative to increase the awareness of genetic diseases in cattle among animal breeders and farmers. This will stimulate strategies to reduce the economic loss due to such genetic diseases in cattle. More so, genetic tests for DNA markers such as Citrullinemia and BLAD may be utilised to identify animals with inherited defects at a very young age based on PCR-RFLP marker (Gholap, Kale and Sirothia, 2014). Also, there is need for cooperation among government agencies, veterinarians, animal scientists and farmers in the control of genetic defects among commercial cattle populations, by formulating and adopting good monitoring and control measures.

This paper reviews some recessive genetic diseases in cattle with particular reference to its definition, genetic cause (DNA mutation) and the clinical symptoms. Furthermore, it also discuss some best practice to control the genetic disease in breeding population of dairy and beef cattle breeds.

Animals are described a “double-muscled” (see Fig. 1) when they have a myostatin mutation. Double muscle gene is caused by the mutation of the muscle growth inhibition gene located on the second chromosomes. It is a negative regulatory factor of the skeletal muscle growth, a member of the TGF-β supergene family (Fiems, 2012). McPherron et al., (1997) noticed that these diseases are mainly found in Belgian Blue and Piedmontese cattle, which usually have an incredibly muscular look even if they do not exercise.

Although, DM animals are touted to be beneficial to farmers, meat industry and consumers due to their valuable carcasses, however, they are more susceptible to respiratory disease, stress and dystocia, resulting in a lower robustness. 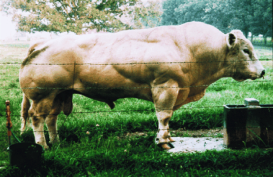 Bovine Progressive Degenerative Myeloencephalopathy (see Fig. 2) is a recessive neurological disease most commonly reported in Brown Swiss pure and crossbred cattle since the 1970’s in Northern America and Europe. It is usually caused by mutations in the EZH2 gene and some rare reported cases have implicated mutations in the NSD1 gene (Gholap, Kale and Sirothia, 2014). Clinical signs of the disease includes hind limb weakness, ataxia, and dysmetria appear in homozygous individuals around 6 months of age with a progressive weakness extending over 2-3 years. The occurrence of this disease can be determined by mapping Bos Taurus autosome (BTA) 4:46-56 Mb and a commercially available diagnostic test marker for 6 microsatellite (MS) (McClure et al., 2013). 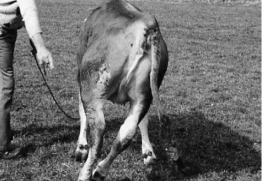 Adapted from Gentile and Testoni, 2006. 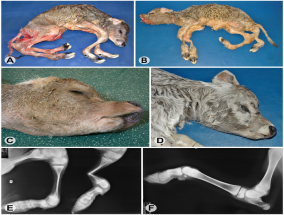 Hydrocephaly is an abnormal increase in the amount of cerebrospinal fluid within the cranial cavity. It is accompanied by expansion of the cerebral ventricles, enlargement of the skull and especially the forehead, and atrophy of the brain which may result in stillborn or dummy calves (Arsdall, 2011). One mutation causing NH in the descendents of GAR Precision 1680, and a popular AI sire in high marbling Angus bloodlines.

This disease most commonly found in Angus and Angus infused beef cattle. Affected calves are born dead with an extremely large cranium with little or no brain material or spinal cord (see Fig. 4). It is probable that a large percentage of mortalities relating to NH occur through embryonic or fetal loss during gestation, which causes the defect to go misdiagnosed or unnoticed. 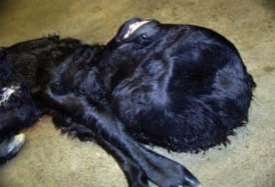 Fig. 4. Deformity in a stillborn calf due to neuropathic hydrocephalus

Bovine chondrodysplastic dwarfism (BCD) is an autosomal recessive disorder with the phenotype of short limbs, joint abnormality, and ateliosis (see Fig. 5). This disorder mainly results from the mutation of a single nucleotide substitution leading to an activation of a cryptic splicing donor site and a one-base deletion resulting in a frameshift mutation (Takeda et al., 2002).

Clinical signs of the disease may present with wide variation, but the main feature is reduced length of bones with an endochondral growth pattern. The Dexter cattle that inherit two copies of the ACAN mutation will abort during the third trimester, while the heterozygous individuals will show the desired miniature cattle phenotype (Arsdall, 2011). 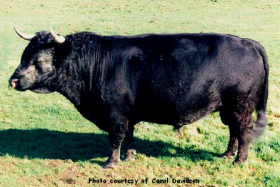 Fig. 5. An example of the degree of dwarfism expressed in carriers

Most genetic diseases are breed-specific that can cause the huge economic losses due to poor animal performance; structural unsoundness reduces the production and reproductive potential of the animal. Consequently, it is necessary to determine the cause of inherited defects. Moreover, controlling genetic diseases, ethical and legal considerations are also important methods to minimise the genetic diseases in breeding population of dairy and beef cattle breeds.

Firstly, farmers should have good breeding records for each animal which include their sire and dam, date of breeding, the date of breeding, abnormality descriptions and photos or videos and causes of death, if the farmers cannot find the reason of death, they should ask help from veterinarians or state diagnostic laboratory (Jane and Trent, 2010). Some of the recessive genetic diseases are somewhat difficult to recognise because mutant gene inherited from only one parent is usually without symptoms. Therefore, good records by breeders will help to know the causes of death in controlling diseases and good diagnosis for the congenital defects.

Secondly, animals that carry a defective gene should be prevented from passing it on to their offsprings by culling. DNA testing is currently available for the genetic diseases. The calf should be made to undergo blood typing within one-month of age to allow early diagnosis of underlying disease. Importantly, Bulls or semen should be purchased from reputable breeders, produced by parents who are not known to carry undesirable genes (Schalles, Leipold and McCraw, 1914). Although, the DNA testing is a huge financial burden as well as time consuming, however, a good diagnosis from one dead calf can save many others. In the last decade, the development of DNA tests for detecting BLAND and Citrullinemia has been effective in breeding population (Gholap, Kale and Sirothia, 2014).

Furthermore, seed stock producers have an obligation to be honest with the customers and to ensure that their customers understand the consequences of using offspring from know carriers. Otherwise, the breeder’s reputations will be at stake, as well as reflect negatively on the entire breed.

Genetic diseases in dairy and beef cattle affect the economics of animal breeders and farmers, and it is a long way to developing DNA tests for the diagnosis of most diseases to check the spread of undesirable genes effectively. Farmers should cooperate with the breed association, extension and university personnel and veterinarians to eliminate and avoid these problems. The government also need to raise public awareness of genetic diseases in breeding population of dairy and beef cattle breeds via social media, advertisements and journals.