Being studied in great detail, cell cycle is a highly complex and regulated process. It is also one of the most critical steps in the life span of a cell and the accuracy with which this process is carried out has a great impact on the existing cell and the fate of resulting daughter cells upon its completion. Based on how crucial the process is, it involves interactions between many different proteins as well as DNA-protein interactions. Many of these interactions result in structural modifications such as chromosome condensation which is the focus of our research paper. This intricate process of chromosome condensation involves a number of key regulators, some of which have been modeled in our system. One of those key regulators is A Kinase anchoring protein or AKAP95, which binds to DNA and recruits other proteins including RIIa subunit of PKA (Landsverk, et al. 2001) and EG7 of condensin complex. The phosphorylation of histone 3 of chromosome by Aurora B kinase also signals condensation (Watrin and Legagneux 2003). This phosphorylation is also required for transitioning from metaphase to anaphase (Hans and Dimitrov 2001). At the end of anaphase, dephosphorylation of H3 by PP1 causes dissociation of condensin complex, PKA and AKAP95 (Ceulemans and Bollen 2004). The dissociation leads to chromosome decondensation, signaling the end of mitosis. Figure 1 illustrates the interaction between these regulatory proteins and the chromosome. 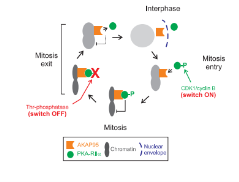 In order to model this system, it was important to analyze how the subcellular localization of the regulatory proteins changed at different stages of cell cycle. Thus, our cell is compartmentalized with non-homogenous distribution of proteins within it. Proteins such as PKA and Eg7 are strictly localized to the cytoplasm before the onset of mitosis. It is only when mitosis begins and nuclear membrane breaks down that these proteins can interact with the chromosome and with other proteins localizes in the nucleus. Therefore, based on their position within the cell and on their binding properties (bound or unbound), the proteins were assigned certain states.

For instance, AKAP95 was modeled as

(present unbound in cytoplasm) and

(bound to chromosome). Similarly, PKA was assumed to be in two states, namely free and bound. Histone 3 of chromosomes also exists in two forms, either only H3 or phosphorylated H3. All the reactions in our model, except degradation are reversible. However, we have assigned significantly low k values to those reactions which occur at a negligible rate at that stage of the cell cycle. The following assumptions have been made in our model;

These assumptions are valid within the boundaries defined for our system. Based on these assumptions and the experimental data obtained for these regulatory proteins, we have produced the following wiring diagram Figure 2. 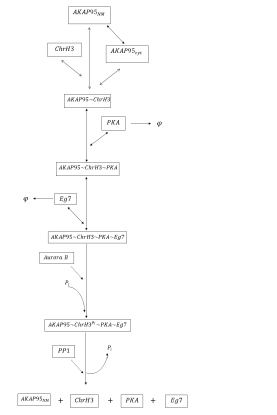 Figure 2. The wiring diagram shows the interactions which we have modeled in our system and clearly defines its boundaries. Effect of enzymes on reactions is shown with dotted arrows. ChrH3 represents histone 3 present on the chromosome which is being condensed. Other states have been explained in mathematical model above. Degradatation is shown with the symbol

The crux of the wiring diagram can also be seen in the reactions shown below which define the major interactions of our system. The reactions have been divided into two distinct phases namely the onset of mitosis and the end of anaphase/start of telophase.

End of anaphase/start of telophase

These set of equations are always valid;

The rate equations for these reactions have been deduced through mass action law. Equations specific to each species have been calculated through ordinary differential equations. They are included in the Supplementary Data. Additionally, the possible stochastic equations for our model have also been included in Supplementary data along with the possible transitions and the propensities for each transition. The ordinary differential equations were simulated using MATLAB.

We first modeled the changes of AKAP95 on the onset of mitosis. (Shown in Fig.1 ) 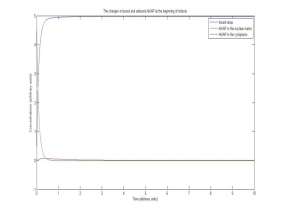 Figure 2 shows the overall changes that take place in the levels of proteins during mitosis. It is observed here that AKAP~ChrH3 complex first increases in concentration as AKAPNM is converted to AKAP~ChrH3, but as this complex is used in subsequent reactions, it gets used up as well, in turn, increasing levels of the condensin complex.

Next step was to model the end of mitosis, which means that the entire condensin complex decomposes into its constituent proteins. This regenerates the proteins to their original levels (shown by the international conditions). (Shown in Fig. 3). The first half of Fig. 3 shows the onset of mitosis, the formation of the condensin complex which eventually condenses the DNA. At the end of mitosis, the cell re-enters interphase (second phase of the figure).

As ours is a simplified model, the proteins return to their initial concentration when the entire condensin complex disassociates, not taking into account any degradation other than the basal degradation of Eg7 and PKA.

Biological systems and their reaction pathways are complex. To reduce the complexity and to predict the behavior of the substrates present in the pathway, various modeling techniques have been employed. These techniques include Metabolic Control Analysis, rate equations, control and response coefficients, cross talk between signaling pathways, oscillatory loops, etc. Thus, through different methods and models, these complex reaction pathways have been simplified so that they can be studied at the molecular as well as the genetic level. These studies and analyses prove useful especially when designing therapies against diseases. The purpose of focusing on chromosome condensation in cell cycle was to enrich the already established models on this process. The central idea of our paper revolved around subcellular localization of regulatory proteins involved in chromosome condensation at different stages. Faulty condensation process is investigated to play a role in cellular defects in resulting daughter cells, and can potentially be involved in cancer-inducing pathways (Lanzini and Mackey 1997).

To our interest was the role of cAMP which plays a role by mediating PKA levels. As we have modeled the initiation of chromosome condensation, an additional regulatory step included separately in our analysis was to regulate cAMP levels. These levels then automatically control the onset of mitosis as well as its end. Thus, as shown in the results, decrease in cAMP levels by an external signal initiates mitosis, leading to nuclear envelope breakdown and subsequent changes. Thus, the regulation of mitosis by cAMP levels can be studied in detail through these models.