Constant blood cell production is dependent on perpetual reconstitution of the hematopoietic system via a series of lineage-restricted intermediates. This remarkable cell renewal process is supported by a rare and small subpopulation of bone marrow cells called hematopoietic stem cells (HSCs) (Notta et al. 2011). During differentiation, HSCs, after series of intermediates, gives rise to various blood cells of the myeloid and lymphoid lineages. It is important that these stem cells do not deplete as many systems are maintained by them hence the unique property termed stemness. Stemness is the unique ability of both embryonic and adult tissue stem cells to self-renew indefinitely and give rise to multiple cell lineages (Wong et al. 2008). Stem cells have a unique expression profile, and as such, they are identified by cell surface markers. Stem cell markers are genes and their protein products used to isolate and identify various types of stem cells (Pazhanisamy, 2013). A well-known HSC marker is aldehyde dehydrogenase (ALDH) also known as retinaldehyde dehydrogenases. Specifically, ALDH1 is a marker for stemness in both the haematopoietic system and other tissue since it is highly expressed by HSC but decreases as they differentiate. Although the precise function of ALDH1 in stem cell regeneration is unclear, it is known that ALDH1 is involved in the biosynthesis of retinoic acid (RA) as it catalyses the oxidation of retinaldehyde to RA, which binds to its receptor RA receptor-α (RARα) in the nucleus to drive transcription of genes (fig. 1). Thus, this led to the suggestion that RA signalling could be important is determining the fate of HSCs. Previous studies by Chute et al (2006) then showed that inhibition of ALDH1 and consequently de novo synthesis of RA not only delayed the differentiation of human HSCs but expanded the well-characterized CD34+CD38− hematopoietic stem and progenitor cells (HSPCs) from the umbilical cord blood. These cells were also capable of long-term engraftment of immunodeficient mice. Another study showed that RA in the Sertoli cells in the gonadal microenvironment embryonic mesonephroi was inactivated by RA through expression of CYP26B1 (in its stroma), thus, ultimately leading to spermatogenesis.

Although it is known that HSCs reside in a highly complex microenvironment that assures their survival, self-renewal, and differentiation; the microenvironment’s mechanisms responsible for maintaining HSC homeostasis remain unclear. Other studies have shown that HoxB4, Bmi1, Wnt/β-catenin, Notch, and aryl hydrocarbon receptor can promote expansion of umbilical cord blood hematopoietic cells. Consequently, this study was aimed at investigating the precise mechanism for the self-renewal of adult human bone marrow-derived HSCs using in vitro and in vivo assays. 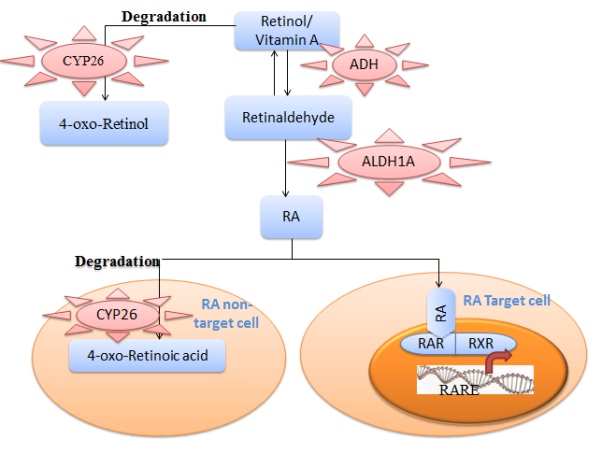 Fig 1. Retinoic Acid Synthesis and Signalling. In an RA-generating tissue, retinol is oxidized to retinaldehyde by alcohol dehydrogenase (ADH) and retinaldehyde is oxidized to RA by retinaldehyde dehydrogenase (RALDH) also known as aldehyde dehydrogenase (ALDH). RA is then released and taken up by surrounding cells. RA non-target cells that express cytochrome P450 (CYP26) initiate the further oxidation of RA for degradation. Some RA target cells express cellular RA-binding protein (CRABP) that facilitates uptake of RA and transport to the nucleus where RA binds the RA receptor (RAR). The ternary complex of ligand-bound RAR with RXR and a retinoic acid response element (RARE) regulates transcription of RA target genes by altering the binding of corepressors and coactivators.

It is generally accepted that at all HSC express the CD34+CD38– immunophenotype. This immunophenotype are a rare and primitive subpopulation of progenitor cells present in both foetal and adult bone marrow. These cells are functionally distinguished from the CD34+CD38+ population by sustained clonogenicity. They differentiate to generate colony-forming unit-cells (CFU-Cs) following culture in the presence of growth factors (Hao et al. 1995); however, less is known about factors that govern the self-renewal of HSPCs and thus they are rapidly exhausted (Dahlberg et al. 2011).

To identify the pathway responsible for HSC fate, Ghiaur et al (2013) procured Bone marrow harvested from five normal donors. Bone marrow comprises of progenitors of skeletal and hematopoietic tissue; and adipocytes surrounded by blood vessels (Travlos, 2006). Thus, the cell subsets of interest were isolated and CD34-positive cells were then selected from mononuclear cells using magnetic beads and column. Viable CD34+ cells were sorted by labelling with monoclonal fluorescein isothiocyanat (FITC)-conjugated anti-CD34 and allophycocyanin (APC)-conjugated anti-CD38 and sorted by using fluorescence activated cell sorter (FACS). Ghiaur et al (2013) then obtained a genome-wide exon microarray data on the primitive human bone marrow-derived CD34+CD38– and CD34+CD38+ cells (more differentiated). They observed that the RA pathway was one of the top pathways that showed coordinated inactivation in CD34+CD38– compared with the CD34+CD38+ population. They also found that in CD34+CD38− cells, the transcriptional level of ALDH1 and RARα was upregulated. This was identified by the Ingenuity Pathway Analysis (IPA) Upstream Regulator module. However, the up-regulation of these early components of RA signalling, did not lead to a concomitant activation of the downstream pathway in the primitive CD34+CD38− cells.

The previous results thus led to the evaluation of the effect of suppression of the downstream RA signalling in maintaining the CD34+CD38– phenotype. CD34+CD38− cells were cultured in serum-free media containing thrombopoietin, stem- cell factor and Flt3-ligand (TSF) with and without the pan-RAR inhibitor AGN194310 (AGN). Ghiaur et al found that culture of the CD34+CD38− cells with TSF generated CD34+CD38− cells and the primitive CAFCW8 but by days 21–28 of culture, both cells declined. Also, CFU-Cs were rapidly generated but reached a plateau at approximately day 21. Interestingly, they observed that inhibition of RA signalling using AGN resulted in a relative lag in generation of CFU-Cs during the first 7–14 days compared with control cultures. However, by day 28, the number of CFU-Cs expanded beyond the control cultures, resulting in a statistically higher overall output of CFU-C (Fig. 2A). They also found that by adding a RAR agonist, all-trans RA, the effects of AGN was reversed (fig 2B). Thus, they concluded that suppression of RA signalling may be crucial in promoting self-renewal of bone marrow-derived primitive HSCs. 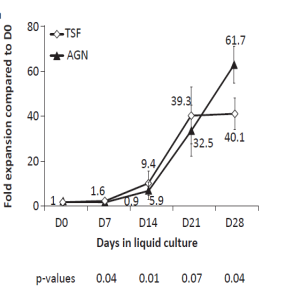 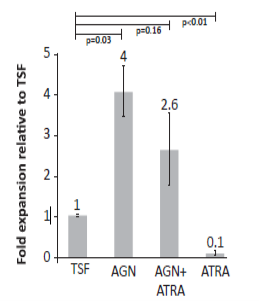 Fig. 2. Effects of retinoic acid (RA) signalling on the committed hematopoietic progenitor cells-CFU-Cs. Co-culture of CD34+CD38− cells with thrombopoietin, stem-cell factor, and Flt3-ligand (TSF) alone or with the addition of 1 μM AGN194310 (AGN) and/ 0.1 μM all-trans RA (ATRA). A) Colony-forming unit cells CFU-Cs reached a plateau at approximately day 21 in cultures with TSF alone. In the presence of AGN, there was a significant expansion of CFU-C at day 28 of liquid culture [61.7 ± 8.1 (AGN) vs. 40.1 ± 7 (TSF)].b) ATRA significantly reduced CAFCW8 recovery.

Among the distinctive characteristics of hematopoietic stem cells (HSCs) is their ability to differentiate and repopulate irradiated/immunodeficient recipients. To assess the level of human engraftment, Ghiaur et al transplanted CD34+CD38– cells in limiting dilution into sublethally irradiated (225 cGy) NOD/SCID-IL2Rγ−/−(NSG) mice before and after in vitro culture; and engraftment was analysed 18–20 weeks after transplantation. They observed that overall, CD34+CD38− cells from AGN–treated culture showed higher human engraftment in NSG mice whereas CD34+CD38− cells cultured in the presence of TSF alone demonstrated a rapid decline of engraftment (fig 3). 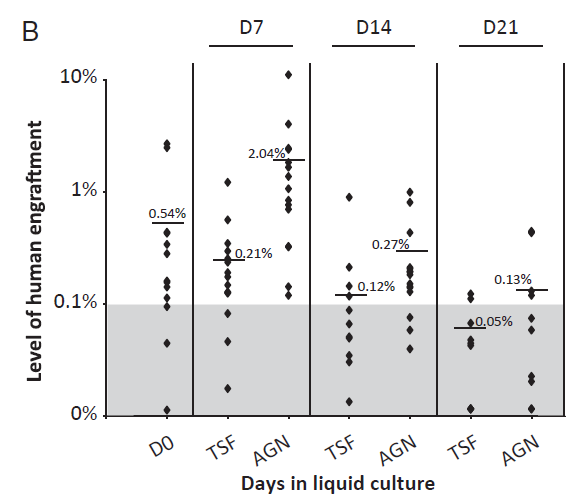 Fig 3. Effect of inhibition of RA signalling on NSG engraftment. Mice transplanted with cells treated with AGN generally had higher level of engraftment compared with control, especially at day 7.

Previous studies have shown that the microenvironment provided by the Stromal cells is crucial in maintaining haematopoiesis for up to 8weeks (Moore et al. 1997). Although the precise mechanism remains unclear, previously McSorley and Daly (2000) showed that CYP enzymes inhibition significantly reduced RA degradation while Bowles et al (2006) showed that precise regulation of retinoid levels during foetal gonad development provides the molecular cue that specifies germ cell fate. Consequently, Ghiaur et al hypothesised that bone marrow may maintain haematopoietic cells in the same way. Thus, they used RA-responsive luciferase reporter assay to evaluate the effect of stroma on RA activity. In this assay, a pGL2-RA responsive element (RARE)-luciferase was transfected into HEK293T cells via Renilla plasmid. Luciferase activity is normally induced by serum, which contains micromolar concentrations of retinoids and can be used to quantify RA. Thus, Luciferase activity decreased significantly when RAR was inhibited with AGN or by cotransfection with a dominant-negative RAR vector, and in the presence of bone marrow-derived stroma. But in the presence of CYP inhibitor, the protective effect of stromal was abolished (fig 4). 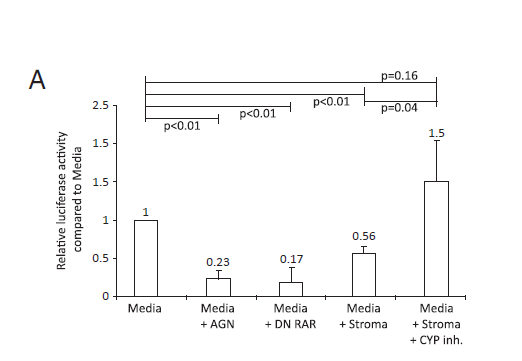 Following this, Ghiaur et al found that bone marrow-derived stroma controls primitive hematopoietic cell fate by probably modulating RA bioavailability through expression of the P450 retinoid hydroxylases- CYP26A1 and CYP26B1. The quantification of CYP26 isoenzymes was assessed by Quantitative RT-PCR using sequence-specific primers. The involvement of the CYP26 isoenzymes was evident by the accelerated loss of CD34+CD38– cells and CAFCW8 after 21days following treatment with a CYP26 inhibitor; and CYP26B1 knockdown which reversed the protective effects of stroma microenvironment- RA bioavailability (fig 5A). Most importantly, the addition of the CYP26 inhibitor to the stromal coculture blocked the maintenance of SRCs thus reducing engraftment (fig. 5B). Moreover, other studies in osteoblast and endothelial cells have shown the expression of CYP26. For instance, Gao et al (2010) showed that OP-9 cells are bona fide Mesenchymal stem cells capable of differentiating into mesenchymal cells and Ghiaur et al also showed that these cells express the CYP26 isoenzymes. Put together, these findings demonstrate that CYP26-mediated clearance of endogenous RA is at least in part responsible for maintenance of the primitive HSC by bone marrow stroma. 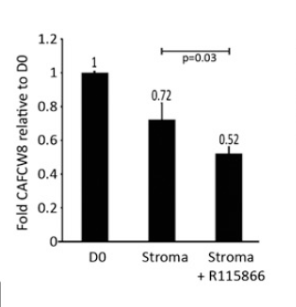 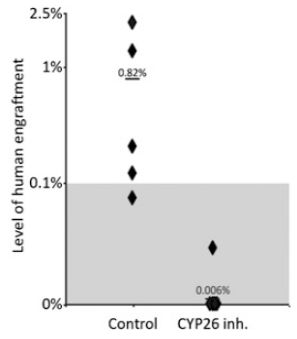 Fig 5. Effect of CYP26 in the maintenance of primitive haematopoietic progenitor cells by bone marrow stroma. a) Shows the effects of stromal CYP26 on the maintenance of CAFCW8 cells during coculture of CD34+CD38− cells with or without CYP26 inhibitor for 21 days. b) Percentage of human engraftment in the bone marrow of individual NSG mice, after transplantation of 2,000 CD34+CD38− cells on primary human bone marrow stroma for 21 days in the presence or absence of CYP26 inhibitor R115866. Black diamonds represent individual mice. The SRC frequency per cultured CD34+CD38− equivalents was 1:1,471 in cultures without CYP inhibitor and <1:21,484 with CYP26 inhibitor, P = 0.01.

This paper elucidated that primitive HSCs could be intrinsically programmed to undergo RA-mediated differentiation unless prevented from doing so by bone marrow niche CYP26 since upstream members of the RA pathways are constitutively expressed. Thus, Ghiaur et al concluded that modulating RA bioavailability in the bone marrow microenvironment could regulate physiologic HSC fate, and that inhibition of RA signalling may be a potential therapeutic tool for human HSC expansion ex vivo. These findings can be useful since it was done using adult human stem cell and so can be translated and useful in regenerative medicine. However, as stated in the study, RA pathway was one of the top pathways to show coordinate inactivation in the CD34+CD38− compared with CD34+CD38+ populations. And it was observed that human engraftment was optimal at day 7, after which there was really no significant difference between mice transplanted with cells treated with AGN or TSF. Thus, this raise a question- could the effect seen on HSC expansion be as a result of the other downregulated pathways? Moreover, since HoxB4, Bmi1, Wnt/β-catenin, Notch, and aryl hydrocarbon receptor antagonists have all been shown to promote HSC expansion, concerted inhibition of these pathways is worth elucidating and could be beneficial clinically.