Xylose is the second most abundant sugar in lignocellulosic biomass, comprising up to 35% of the total carbohydrates (Lee, 1997; Saha, 2003; Jeffries and Jin. 2004; Qin et al, 2012). Microorganisms possess three different pathways for D-xylose degradation. The first pathway, present in many bacteria and few fungi, involves xylose isomerase which converts d-xylose to xylulose and phosphorylation of xylulose by xylulokinase followed by its entry to pentose phosphate pathway (Harhangi et al, 2003; Lawlis et al, 1984; Lokman et al, 1991; Rygus et al, 1991, Scheler et al, 1991). The second pathway commonly found in filamentous fungi and yeasts involves use of xylose reductase for converting d-xylose to xylitol, conversion of xylitol to xylulose by xylitol dehydrogenase and conversion of D-Xylulose to D-xylulose 5-phosphate by xylulose kinase followed by its entry into pentose phosphate pathway (Jeffries et al, 1983; Alexander et al, 1988). The third complicated pathway is present in certain Hyperthermophilic Archaea species like Sulfolobus solfataricus and Sulfolobus acidocaldarius. This pathway involves conversion of D-xylose to D-xylonate by xylose Dehydrogenase followed by conversion of D-xylonate to 2-keto-3-xylonate by xylonate dehydratase. 2-keto-3-xylonate is converted to malate (Nunn et al, 2010).

Though many bacteria and filamentous fungi are known xylose utilizers and can be used in fermentation of xylose, yeasts are superior as they yield more ethanol. Among the yeasts Candida shehatae, Pachysolen tannophilus and Pichia stipitis are known to produce ethanol using xylose but require oxygen for xylose utilization (Neirinck et al, 1984; Yu et al, 1995) which reduces the ethanol yield. S.cerevisiae, the yeast used widely for ethanol production cannot metabolize xylose because of the lack of a pathway to efficiently convert xylose to D-xylulose which the organism can metabolize via the pentose phosphate pathway after phosphorylation (Jeffries and Jin. 2004). Genetically engineering S.cerevisiae has been considered to be the viable option for ethanol production from xylose. Though three different pathways exist in microorganisms, the simple pathways involving xylose isomerase, xylose reductase. xylitol dehydrogenase and xylulose kinase are suitable for metabolic engineering of S.cerevisiae as they involve fewer steps. These two pathways have been successfully engineered in S.cerevisiae. Kotter et al (1990) first expressed Xylosereductase and xylitol dehydrogenase genes of Pichia stipites in S.cerevisiae and able to grow S.cerevisiae on xylose as sole carbon source. Expression of P.stipitis xylose reductase in S.cerevisiae using enolase promoter and terminator of Saccharomyces cerevisiae resulted in eylose reductase activity which was 3 time hiher tthan that of P. stipites. Co expression of xylitol dehydrogenase cloned into same plasmid allowed the transformants to grow on a medium containing xylose as the sole carbon source and produce ethanol (Tantirungkij et al, 1993). 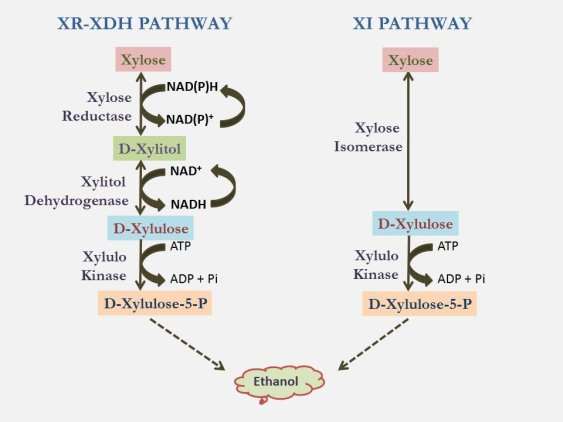 Xylose reductase (EC 1.1.1.21) is homodimeric oxidoreductase dependent on NADPH or NADH, produced by some yeasts and mycelial fungi which catalyses the reduction of xylose to xylitol (Chiang and Knight, 1960; Kim et al, 1999; Ko et al, 2006). As part of engineering S.cerevisiae for xylose utilization, heterologous xylose reductase genes have been successfully expressed in S.cerevisia (Hallborn et al, 1991; Kim et al, 1999). But the co-factor imbalance between xylose reductase and xylitol dehydrogenase results in xylitol accumulation. Replacement of arginine with histidine (R276H) by point mutation altered the co-factor requirement of xylose reductase from NADPH to NADH (Watanabe et al., 2007) which reduced the xylitol accumulation and enhanced ethanol production. The co-enzyme preference of Candida tenuis xylose reductase towards NADPH was enhanced 170 fold when lysine at position 274 was replaced with arginine and asparagine (ASPN) at position 276 was replaced with ASP (Petschacher et al, 2005; Petschacher and Nidetzky, 2005). This double mutant gene introduced in S.cerevisiae resulted in 42 % enhanced ethanol production compared to the wild type gene containing strain and reduced xylitol accumulation by 52 % (Petschacher and Nidetzky, 2008).

GXS is a glucose/xylose symporter (GXS) identified from Candida intermedia (Leandro et al., 2006, 2008). Homologue of this gene has been found in Pichia stipitis.

Acetyl xylan esterase is an enzyme which removes side chains of xylan and this removal enhances xylan hydrolysis (Poutanen et al, 1987). Synergism has been observed between endoxylanase and acetyl xylan esterase improving cellulose hydrolysis (Selig et al, 2008) A direct correlation between removal of acetyl groups and the release of xylose in the hydrolysis of different corn stover substrates with both endoxylanase and AXE was observed (Selig et al, 2009).