Review on Phytochemical and Pharmacological Properties of Prunus persica Linn.

Prunus persica Linn. Batsch (Family: Rosaceae), commonly known as Peach tree in English and Aru in Hindi, is native to Persia, China and also distributed in Australia, India and USA. Traditionally, the plant used in the treatment of constipation, laryngitis, menostasis, dermopathy and contusion. The major phytoconstituents reported in the plant include amygdalin, prunasin, persicaside, β-sitosterol, quercetin etc. Pharmacological studies reported in this plant are antiallergic, anti-inflammatory, antiphotoaging, antitumor and spasmogenic effects. This review provides valuable information on phytochemical, pharmacological and traditional properties of the Prunus persica which will help the researcher for further studies.

According to the World Health Organization, more than 80% of the world’s population mostly in poor and less developed countries depend on plant-based medicines for their primary health care needs.[1] About 35,000 plant species are being used in various human cultures around the world for medicinal purposes.[2] About 170 active compounds currently isolated from higher plants are widely used in modern medicine. Even today, approximately 80 % of such compounds depict a positive correlation between their modern therapeutic use and the traditional use of the plants from which they are derived. At least 7,000 medicinal compounds in the modern pharmacopoeia are derived from plants.[3,4]

Prunus persica Linn. Batsch (Family: Rosaceae), commonly known as Peach tree in English and Aru in Hindi, is native to Persia, China and also distributed in Australia and USA. In India, it is cultivated only in the Himachal Pradesh, Kashmir and Uttar Pradesh.[5-7] Traditionally, the plant used in the treatment of constipation, laryngitis, menostasis, dermopathy and contusion.[8]

The peach is a small, deciduous and glabrous tree which grows upto 6m in height (Figure 1). The leaves of the plant are simple, alternate, long-lanceolate, serrulate, 8-15 cm long, 15-35 mm wide, petioles 1-1.5 cm, with glands and small stipules. The flowers of the peach are 1-2 cm in diameter, bisexual, pink, sepals pubescent on exterior, sepals and petals 5, stamens many, inserted with the petals on the calyx tube, pistil1, with 2 ovules. The fruit of the plant is 1-5 cm in diameter, tomentulose, drupe, with a fleshy outer layer surrounding a hard stone containing the seed, the stone deeply sculptured in the month of April- May. The fruit is matured in the season of August- September.[8] 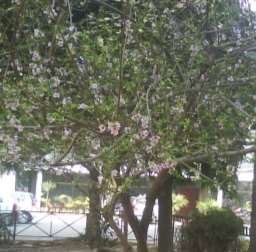 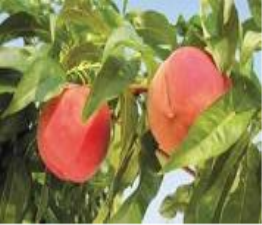 Prunus persica is native to China and Persia. This plant is also cultivated in USA, New Zealand, Australia and Temperate Asia. In India, it is cultivated in Kashmir, Himachal Pradesh, Utttar Pradesh, and to a limited extend in Nilgiris. The plant is also distributed in the Pakistan, Japan and in the Deccan Region.[5-7]

The leaves of the plant are used as anthelmintic, insecticidal, laxative, sedative and vermicidal and also in the treatment of piles, leucoderma, and whooping cough. The fruit is used as an aperients, aphrodisiac, antipyretic, antiscorbtic, brain tonic, demulcent, mouth freshener, stomachic and useful in thirst, biliousness and “kapha”. [5,6,10] The oil from the seeds is abortifacient, good in piles, deafness, earache, stomach troubles of children.[10] The flowers are used as an anthelmintic and purgative.[7]

About ½ teaspoon of young leaves, pounded and mixed with water, is given twice daily after meal in dysentery. The leaves warmed over fire are rubbed against insect bite and pain in eyes. The pounded young leaves are applied on wounds for killing the wound worms in case of animals such as cow and mithun.[21] The paste of the plant along the table salt and water is applied on affected skin twice a day to kill germs in wounds and fungal infection.[22] The powdered seeds is mixed with water and usually applied on hands as vulnerary during winters.[23] The fruits of the peach is used in the treatment of damaged hair.[24]

The plant is used to remove maggots from wounds and also used as demulcent and lubricant.[25,7] Crushed leaves are used to stain palms and feet, in wound healing, burning sensation, colouring palms and feet.[26] The oil extracted from seeds is applied externally for massaging in rheumatism.[27]

The plant leaves are used as a anthelmintic in traditional veterinary practices for the treatment of helminthosis in animals.[28,29]

The fruits of the plant are edible, leaves serve as fodder and stem as firewood.[23] Root bark is used as a dye.[30]

The plant possesses the anti-photoaging effect which was assessed by DPPH, Western blot and reverse transcription–polymerase chain reaction analysis. A compound named 2-methoxy-5-(2-methyl propyl) pryazine isolated from the peach was responsible for this activity.[33]

The Ku-35 extract of the plant showed protection against UV-induced DNA damage and carcinogenesis when applied topically.[34]

The aqueous extract of peach leaves caused a dose-dependent spasmogenic effect at the dose range of 1–10 mg/ml in isolated guinea pig ileum.[36]