Man has always been carving out an easy life from nature which has always made nature to get polluted with lots of toxic chemicals. The hurry to achieve this above mentioned peace has again made heavy adverse impacts on mankind which was not that dominant in earlier days but extremely evident now-a-days. The type of pollution’s that were dealt in lower classes has probably got transformed into a new heading that is types of Hidden Man-made Dangers.

This is a dicey scenario wherein the product expected from this polluting plan is actually used for the benefit of man but the byproducts formed or the compounds that is left undegraded harms the environment indirectly affecting the environment. Many scientific approaches have managed to come up with some form of pollution control devices and practices which can only assure diminishment of problems associated with it. The further article would be a summarized note on the Health Effects of Pollutants as per their priority fixed by certain organization like US Environmental Protection Agency.

Few important compounds are being elaborated as follows:

A polycyclic aromatic hydrocarbon having molecular formula of C12H10 [Molecular weight: 154.2078g/mol] acts a very potent carcinogen and a pollutant hence being placed first in the priority sequence.[1] It is a white coloured crystal having a boiling point of 279oC and is water insoluble. It is in produced during incomplete combustion of garbage, coal, oil etc. [2]

It is mainly used in research purposes and also in production of few products like pesticides, dyes etc. these compounds found in the smoke from cigarettes and exhausts of vehicles, Grilling and charring food etc.

Exposure to contaminated air, soil (having traces of coal tar heavy oils, roofing tar etc.), and water (having any form of this Polynuclear or polycyclic aromatic hydrocarbon) can be dangerous as it might easily attack the fatty tissues of our body. [2, 3, 4] The metabolic action observed on this compound includes mainly oxidation which happens in the liver in presence of cytochromes p450 oxidase and p448 oxidase. The epoxide intermediate acts as a reactant which covalently links to DNA also with Histones and expresses itself as a carcinogen. [5] Experiments in Lab mice have shown lot of problems like immune problems, reproductive problems, birth defects etc. All these things have not been that evident in Humans apart from carcinogenicity. [3] Bladder, Skin, Lung, GI tract cancers are more profound as per epidemiological research. [6]

Another important pollutant is C3H3N [Molecular weight: 53.062g/mol] which is a colourless or pale yellow liquid with a sharp odour. It has a boiling point of 77.3oC readily being soluble in Isopropyl alcohol. [7]

It is being primarily used as a major component in the production of acrylic, modacrylic fibres, nitrile rubbers, and also plastics like (acrylonitrile-butadiene-styrene and styrene-acrylonitrile resins), adiponitrile, acrylamide. [8, 9]

The exposure which is observed with this compound is an occupational exposure due to its importance for production of above mentioned products. The workers who have been exposed to this chemical has complained of Nausea. US-EPA has categorized the health hazards as Acute [exposure to acrylonitrile for less than an hour showed nervous irritability, leukocytosis, kidney irritation, and mild jaundice while acrylonitrile poisoning breathing difficulties, convulsions, nausea [8,11], skin burns [10] etc.], Chronic (Non-Cancer) [Mucous Membrane irritation, Headaches, Dizziness [9]], Reproductive/Developmental [No record for Humans but malformations, degenerative changes in testicular tubules etc. [8]], Cancer Risks [Lung Cancer is evidently observed in workers due to heavy inhalation of this chemical due to its carcinogenic effect as it being regarded as a Group B1, probable human carcinogen [11, 12]].

It is an aromatic, volatile, clear, colorless, flammable compound having molecular formula of C6H6. The boiling point is 80oC. It’s a natural ingredient of crude oil, cigarette smokes etc. It is an important component of many synthetic polymers [nylon and polyester], rubber, etc. It being an organic liquid favors a lot by acting like a solvent in paints and in chemical compound synthesis etc. It is also a good disinfectant. [13]

The exposure is mainly via inhalation as it’s a volatile compound. Inhalations of benzene (concentration of more than 60ppm) by many workers from the work places have informed about various problems like Dizziness, Headache, Nausea, Shortness of breath, Convulsions, Tissue injury etc. as well as its exposure causes irritation of skin as well as eye along with eye redness. [14, 15] The major sources benzene in another mode that is drinking water is outlet release from factories; and discharge from gas storage tanks which can cause anemia, thrombocytopenia and can also show carcinogenic problems.

The major metabolites of benzene metabolism are phenol, hydroquinone, and catechol. These metabolites are interactive and can affect the rate of each other’s metabolism because they are substrates for the P-450 enzyme system. The route of exposure has little effect on the subsequent metabolism of benzene to haemotoxic metabolites. Glucuronide conjugates are also present in the urine. [16, 17]

Chloroform is an important chloro-derivative which is released in air as a result of its formation in the various water sources after chlorination. It is a volatile colourless liquid with characteristic odour. Its chemical formula id CHCl3 having a molecular weight of 128.1705g/mol. It has a boiling point of 62oC. Pulp and paper mills, hazardous waste sites, and sanitary landfills also act as a source of chloroform.

The major effect of short exposure to chloroform is CNS depression while Long exposure in humans have shown effects on liver (hepatitis, jaundice) and CNS effects like as depression and irritability. Chloroform is been classified in Group B2 as a probable human carcinogen and has proved carcinogenic in animals after oral exposure causing kidney and liver tumours.

The metabolic decomposition product of oxidative action on chloroform includes phosgene, hydrogen chloride, chlorine, carbon dioxide, and water. [19] Chloroform had a therapeutic use where it was chiefly used as an anesthetic and in pharmaceutical preparation immediately prior to World War II. However, these uses have been banned. [19]. It was also observed that chloroform anesthetized patients showed incidences of Cardiac Arrhythmias. [20]

Chloroform being a pollutant spreads via food, drinking water and air (concentration of chloroform being less) and is readily absorbed by the skin of humans and animals which is later diffused in the complete body. Fatty tissues, regions of Kidney, Liver, Lungs, and CNS show maximum absorption of this pollutant. The primary route of removal of this by the body is exhalation of carbon dioxide. But untreated pollutant is retained in the fatty tissues. Biotransformation of untreated chloroform is done in presence of oxygen in liver catalyzed by cytochrome P-450 to produce 1,2,3-trichloro-methan-1-ol. Sudden removal of hydrochloric acid from this complex leaves out an intermediate that is Phosgene which interacts with proteins of various tissues and ends up damaging it eventually causing cell death. [21]

It is an organic pollutant having molecular formula of C12H8Br2O [Molecular weight: 249.11 g/mol] which is regarded as a potent hazard. It’s a colourless liquid which is found incompatible with strong oxidising agents. Its boiling point is 310.1oC. It is basically used for research usages but then earlier it was used as flame retardant. The exposure to this compound can happen via contaminants from drinking water or air. Skin readily has a tendency to absorb this compound. This compound is found to be resistant to biodegradation but can show photochemically degradation in the gas phase itself and show production of Hydroxide Radicals.

US Environmental Protection Agency has concluded as per obtained information as non-carcinogenic. The information still needs to be updated. The workers working in the industry producing this compound has health issues which could have been after absorption via skin or inhalation. [22]

It is an important aromatic compound present as white solid crystalline structures. It has a molecular formula of C10H8 [Molecular weight: 128.17052g/mol]. Its boiling point is 218oC having an aromatic odour. [23] It is used in preparation of certain compounds like phthalic anhydride also carbamate insecticides, surface active agents and resins, acts like a dye intermediate, as a synthetic tanning agent and also as a moth repellent. [24, 25]

Exposure could be via the use of Mothballs, occupational exposure in industries, wood preserving or dye producing industries. Tobacco smoke also show some level of naphthalene which can act as a source of pollutant. [24]

The toxic compound is alpha-napthol, the breakdown product of naphthalene which can acts a major source for Haemolytic anaemia. This product can also affect the neurological, nephrological and liver damages. Alpha napthol can get excreted along with by products of the reaction. [26, 27] The health hazards also include harmful non-cancer effects and also few like cataracts, chronic nasal inflammation, and retinal haemorrhage. Occupational exposures have also shown dicey results of alveolar/bronchiolar adenomas, carcinoma of larynx and pylorus and cecum neoplasms. [26] Thus the International Agency for Research on Cancer (IARC) of the World Health Organization (WHO), EPA has concluded Napthalene to be a Group C, possible human carcinogen. 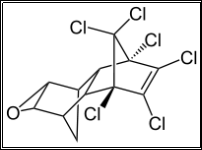 The compound appears to be like whitish crystals. These compounds are an organochlorine derived synthetic pesticide which has a mode of action by acting an s a poison to insects affecting their stomach. These are broad spectrum insecticide also control infestations of pests.

The natural mechanisms favour he dieldrin form which is unfortunately more persistent. As per its solubility in water and ability of both of the compound to interact with soil makes it stay in the soil for a longer time. Exposure to this chemical can be very obvious via Air, surface water near the sites contaminated with this chemical, Eating foods that come from these heavily contaminated place, living at places where termites are taken care of using these compounds. It gets stored and accumulated in the fats and its release from the body is very slow.

The symptoms could involve Convulsions, Dizziness, Headache, Nausea, Vomiting, irritability and uncontrolled Muscle actions. Convulsions have also leaded to some deaths. Dieldrin has adverse affects which is being studied in animals but yet to be correlated with Humans like decreasing the immunity power, affecting liver, also inducing some neurological disorders, affects the sperm count in males. The cancerous affect is observed in mice as to induce liver cancer but no conclusions for Humans yet. EPA has passed this compound as s probable carcinogen. [28, 29, 30, 31]