All animal classes exploit resources that are dispersed in distinct areas of the environment and therefore we should expect natural selection to favour individuals that utilize these sporadically-distributed reserves most proficiently. Put in perspective, optimal foraging theory predicts that individuals should improve their patch staying-time so they can maximize the rate at which resources are found and captured (Stephens and Krebs 1986; Henneman 1998).

The Marginal Value Theorem (MVT) is a method for calculating Benefit to Cost Ratios. Charnov (1976) modelled his Marginal Value Theorem of optimal foraging, declaring that animals should be able to predict the future value of a resource based on information that they gain from their assessment of that resource and therefore immediately decide whether to stay and exploit the resource or to leave for another patch. This theory assumes that food occurs in patches and the forager, on discovering the patch needs to balance the future profit from that patch, versus the future yield if the forager decides to move on to another patch. It assumes that the cost of finding prey & processing time will remain constant but that the energy gained from each prey acquisition will vary between patches. It also assumes that the quality of the patch will decline as it is depleted. Under this theory, an animal should leave a patch when the balance of gain dips below the average rate of gain for the entire area.

Forming teams of three members, each person performed in turn, one of three tasks: a forager, a data recorder or a timer. Each team member took turns at foraging for prey (marbles) that had been placed in three well stocked buckets containing wheat grains. Each forager was given a practice run in which the prey density was always the same. Using one hand and raising each prey above the head and calling out, the forager proceeded to collect food (marbles). The decision to stay at the patch or leave for the next one was left to the forager.

As predicted by the Marginal Value Theorem, our foragers spent more time in patches of high yield than those of low yield. All three foragers left their patches quite un-depleted, supporting the idea that at some stage a forager must decide to move on to another patch and in so doing prevent its own consumption of the resources from completely reducing the patch in which it is presently foraging, thereby allowing the recovery of the patch (Table 1). 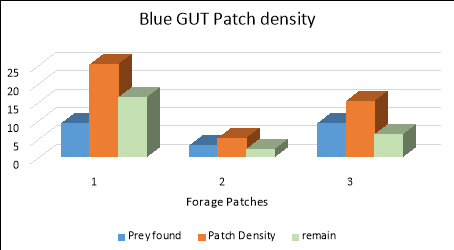 Supposing the forager is maximising its efficiency by balancing cost and benefit, the results are the collective prey from each patch and the cost is the time spent foraging and in moving between patches. 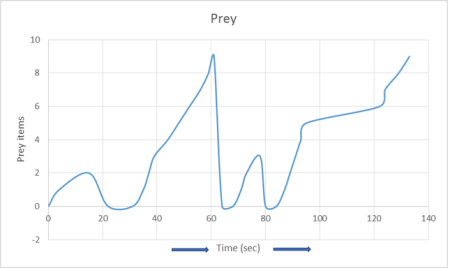 Table 3 shows that the blue forager maximized foraging time and accumulated prey steadily but also gave up quickly to move to the next patch. Patch 2 was a poor patch as can be seen in the table of results (Table 5) and little time was spent in this patch. The results also show that the blue forager gave up relatively quickly in the high yield patch, unlike the red forager, who spent longer and captured more in the high yield patch. The cumulative gain slope is not curved, indicating a steady capture rate rather than a rapid rate, followed by a quick departure for the next patch, and these data do support the prediction that the forager will spend longer in a high quality patch than a poor one.

The Give-Up-Times were generally consistent across the three foragers as can be seen in table 4, with the exception of the Red forager in the low patch which is out of sync with the rest of the results. These results further support Charnov’s (1976) predictions that GUT should be lower in a richer environment. 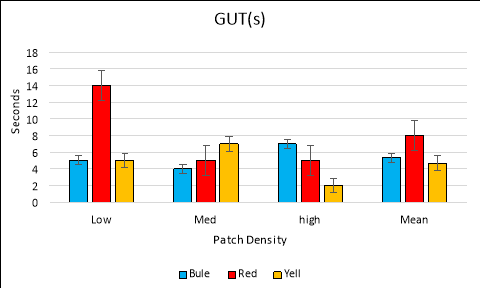 This Marginal Value Theorem works if the forager, after arriving at the patch can instantly estimate the value of the patch, this is indeed routine behaviour for many birds and grazing animals. We expect the animal to forage randomly in an environment with an infinite number of well-defined potential patches to be exploited. However, this does not work across all taxa as Downes (2001) describes; an ambush predator, such as a garter snake, will usually choose to wait for prey big enough to warrant the effort and routinely rejects “patches/prey” that are too big or too small. Similarly, in a study by Brown (1997), he hypothesizes that although Gerbils and Larks in the Negev Desert share food resources, Gerbils are able to more efficiently exploit food sources than the Larks, who do not deplete the resources, but instead supplement with other food items, showing the Gerbils cause the seed patches to become unacceptable to the Larks by their consistent exploitation of the patches.

Foragers are expected to capture more prey in areas of high food density than in low density and this is supported in our results across the three foragers and can be seen in Tables 4 and 5.

Under the Marginal Value Theorem, food should be left in a patch after an animal leaves the patch, because leaving the patch is not determined by the depletion of the food resource but more by the harvest rate of the general environment.

In this Optimal Foraging study we adopted a Giving-Up-Time model (GUT) of assessing optimal foraging (Tables 1and 4) because it is better suited to the continuous process of assessing the patch while the animal is in the patch. In this model, the animal stays longer in the patch the better quality the patch is. As is predicted in the MVT model, our foragers caught more prey per unit time in high density patches than in low density patches and this is clearly shown in Table 3. 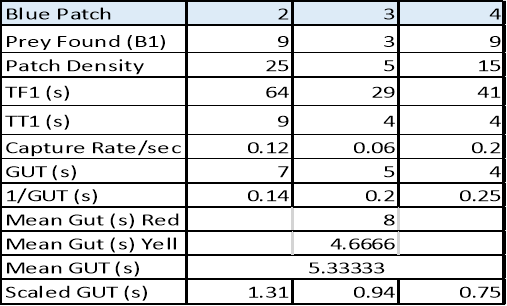 MVT predicts that a forager should move on to another patch when the foraging rate for the patch has declined to the average rate for the environment as a whole, suggesting that the GUT should be similar across all patches for each individual forager and equal to that of the average capture rate for the environment(Table 4). While foragers are expected to remain longer in patches of high density than low density, our results showed little difference between the give up time across the Yellow and Blue patches (Table 5). Possible exceptions to this situation could be in seasonal times of “plenty”, an absence of predators and intra-specific competition, when there is less need to keep searching for a better patch.

Anthropological applications for the MVT are varied. Ross (1978) hypothesised that human foragers consciously practice conservation of their prey with hunting taboos in Arizona and the alternation of hunting lands in sub-arctic North America (Feit 1973) pointed to efficient resource management by indigenous populations. Conversely, it has been argued that the mass extinction of many New World vertebrates in the Pleistocene Ice Age was caused by the colonization of the Americas by Paleo Indian groups (Martin, 1973). Although the MVT is an excellent general tool for simplifying foraging theory for many animal species, the the rational complexity of human foraging decisions and the implausibility of simple optimization criteria matched with culturally mediated customs and values, cannot be accounted for when using this model because it cannot be simultaneously precise and general, and is therefore a limiting factor in the use of this model on humans.

Brown, J. S, Kotler, B. P, Mitchell, W. A. 1997. Competition between birds and mammals: a comparison of giving-up densities between crested larks and gerbils. Evolutionary Ecology. 11:757-771.

Feit, H. A. 1973. “The ethno-ecology of the Waswanipi Cree, or How hunters can handle their resources,” in Cultural ecology. Edited by B. Cox, pp. 115-25. Toronto: McClelland and Stewart.

Henneman M.L (1998) Maximization of host encounters by parasitoids foraging in the field: females can use a simple rule. Oecologia 116:467-474