Gesonia gemma Swinhoe (1885), the grey semilooper has emerged as a serious threat to the soybean crop. This defoliator causes heavy damage to the crop in the form of loss in grain weight and grain number. Gesonia gemma population from various districts of Maharashtra has been taken to study the population dynamics related to abiotic features. Sequential covering algorithm (CN2 rule induction) has been proposed for rule induction model to generate a list of classification rules with target feature (G. gemma population) and the independent abiotic features. The classification rules have exhibited more accuracy and can be used to study the collected evidence for prediction.

Soybean [Glycine max (L.) Merrill] belonging to the family Fabaceae commonly known as legume family as it is widely grown for its edible bean which has a good amount of calcium, protein and vitamins. In early seventies the crop was considered to be the safer crop against the insect pests. However, the scenario has changed as researchers from many parts of India have confirmed that seed yield and seed quality are being adversely affected by major insect pests viz. girdle beetle, tobacco caterpillar, grey semilooper, Helicoverpa armigera, jassids and white fly Netam et al. (2013).

Rule induction model has been proposed to understand population dynamics, since the rules (IF-THEN) are said to be more expressive and human readable in nature. One of the sequential covering algorithm, CN2 rule induction is used in building the model. CN2 induction algorithm, Clark and Niblett (1989) is a collective work based on AQ algorithm and ID3 algorithm. It is developed to classify rules accurately even in the presence of noise and the rules are made to be efficient and simple. CN2 classification rules have shown 93.73% accuracy in heart disease prediction, a comparative study done by Ramaraj and Thanamani. (2013). The proposed rule induction model will extract IF-THEN rules by classifying of pest population as high, medium and low based on Economic Threshold Level (ETL) on soybean.

The dataset comprises of field pest scouting data from various districts of Maharashtra viz., Akola, Amravati, Nagpur, Wardha and Yavatmal, along with its respective abiotic factors which includes maximum temperature (MaxT), minimum temperature (MinT), relative humidity (RH), moisture adequacy index (MAI), soil moisture index (SMI), total rainfall (RF) and number of rainfall days in a week (RFD) from 2009 to 2013. The sample data is given in the below table

Table 1. Sample tuples from the dataset

The pest population count has been classified as low, medium and high based upon the Economic Threshold Level (ETL), and it has been defined using standard week and crop stage (pre-flowering and post-flowering).

Table 2. Classification of PI according to the proposed ETL

Using this Max-Diff method the continuous variables are categorized into discrete variables of 5 bins (A1, A2, A3, A4, A5) each except the feature (no. of rainfall days).

Rules (IF-THEN rules) are the most expressive and human readable representations for learned hypotheses, Anderson and Moore (1998). Rule induction models basically allows the interrelationships of features to influence the output from the classification, Chu and Lin (2005). Hence they are said to be sensitive than that of other classifiers which considers features as independent to the target feature. The Rule induction uses the following CN2 classifier procedure for extracting rules from the dataset:

// Construct the learning algorithm and use it to induce a classifier

Using the CN2 classifier five sets of IF-THEN rules have been generated for the five different districts of Maharashtra.

The IF-THEN rules derived from CN2 classifier for five districts of Maharashtra from 2009 to 2013 are shown in below figures (Figure 1 to 5). 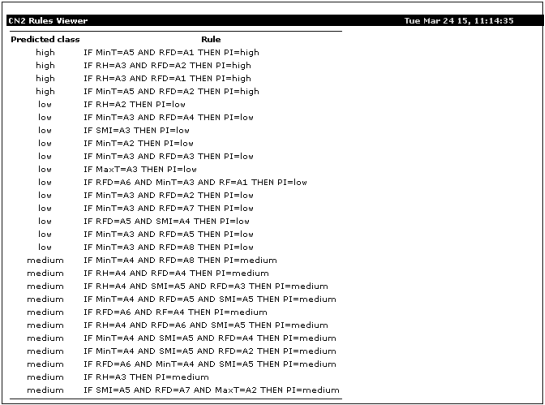 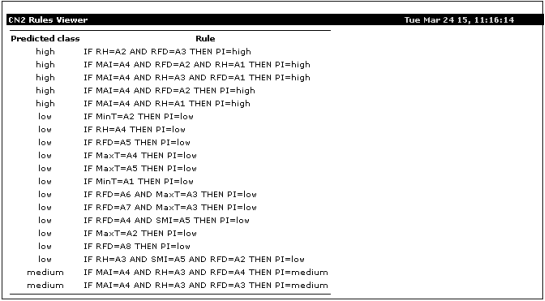 Studying the population dynamics of G.gemma in Maharashtra has been successfully done by using the CN2 classification rules. The derived rules have exhibited clearly that higher temperature and lower rainfall are the favorites of pest population. But when lower the temperature and more the rainfall days then the population seems to be very less, considering all five important districts of Maharashtra. Thus the rule induction model makes it easy to study the population dynamics of G. gemma occurring on soybean, which will help in the development of better prediction module in IPM in time for sustainable agriculture.

Brigham Anderson and Andrew Moore. (1998). ADtrees for Fast Counting and for Fast Learning of Association Rules. Knowledge Discovery from Databases ’98.