Homeostatic regulation of plants seeks to: Maintain an adequate uptake of water and nutrients form soil into leaves

When plants respond to environmental conditions such as high temperature or salinity, they are balancing several conflicting demands

The composition of extracellular fluids is not precisely regulated in plants.

The ambient temperature tends to change. The plants are sessile organisms and thus cannot maintain a constant body temperature. As a result, the intrinsic genetic mechanisms play a significant role in temperature homeostasis. Indeed most plants maintain a relatively constant phenotype in varied temperature.

Ex: Wild-type Arabidopsis plants maintain a relatively constant size over a wide range of temperatures. Here we show that this homeostasis requires the BONZAI1 (BON1) gene because bon1null mutants make miniature fertile plants at 22°C but have wild-type appearance at 28°C. The expression of BON1 and aBON1–associated protein (BAP1) is modulated by temperature. Thus BON1 and BAP1 may have a direct role in regulating cell expansion and cell division at lower temperatures. BON1 contains a Ca2+-dependent phospholipids-binding domain and is associated with the plasma membrane. It belongs to the copine gene family, which is conserved from protozoa to humans. Our data suggest that this gene family may function in the pathway of membrane trafficking in response to external conditions.

Metal hyper accumulating plants are those which have capacity to store very large amounts of metals in their shoots. Metal homeostasis genes have therefore been used for number of purposes. There are a number of reasons why it is important to be able to introduce metal hyper accumulation traits into non-accumulating species (Ex: phytoremediation or biofortification in minerals) and to engineer a desired level of accumulation and distribution of metals.

List of transformations discussed in the review, shown are the genes and species used for transformation, and identified metal-homeostasis genes differentially expressed in transform ants relative to wild-type (WT) or vector-controls (VC) 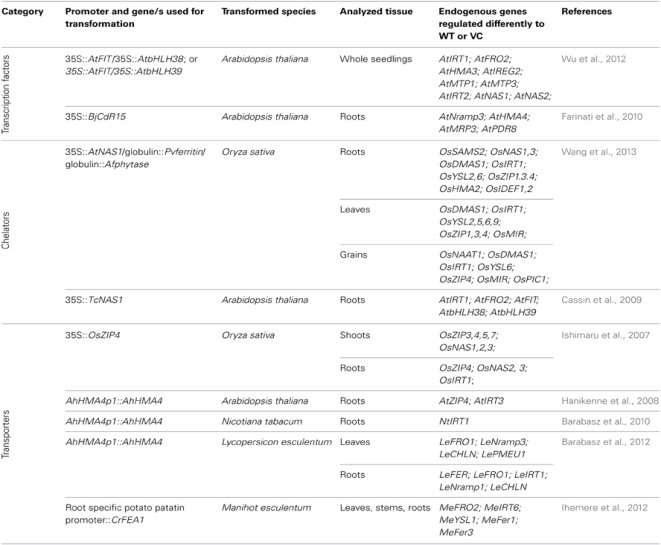 Micro RNA, mi398 mediates the regulation. It directs the degradation of copper zinc superoxide dismutase m RNA when copper is limited. Thus; mi398 is a key factor in copper homeostasis.

An experiment was conducted on Arabidopsis plant. Two conditions were to be studied:

A T-DNA insertion mutant which was yellow and sensitive to iron deficiency was identified. It contained a reduced amount of Iron. The mutant encodes the Arabidopsis mediator complex subunit MED16.This MED16 interacted with other subunit MED25.Then; both subunits interacted with the transcription factors in ethylene signaling associated with regulation of Iron Homeostasis. The transcriptome in the mutant and the subunit is significantly affected by the iron deficiency.

In iron sufficient conditions, they positively regulate iron homeostasis. This is a complex transcriptional regulation in plants.

They live in wet environments.

They are partially or completely submerged in freshwater

They live in dry environments. They have less number of stomata to reduce the rate of Transpiration.

They live in sea waters and are adapted to salty environments.

Plants maintain the homeostasis by keeping their environmental conditions constant or either by responding to temperature and climate changes. Certain gnens and mechanisms are put to use for this function. Arabidopsis genes function has been discovered. These genes bring quantitative improvement in plants. In addition, the new functions to minimize the effect of environmental stress to achieve maximum productivity have been discovered.

Attempts are being made to elucidate genetic functions through a reverse genetic approach using gene destruction and transgenic over expression. Other targets of research include genes that respond to environmental changes and stimuli and genes involved in metabolic regulation.

Plants have acquired an ABA-independent drought tolerant pathway which induces the expression of stress response genes in plants. The DREB genes have a significant role in the pathway. The first isolated c DNA’s encoding DRE binding proteins specifically bind to DRE sequence and activate the expression of genes driven by it. Expression of theArabidopsis DREB1/CBFgenes is induced by cold, while theDREB2genes are induced by dehydration, high-salinity, and heat stresses.

The presence and role of these transcription factors have been reported in many other important crops, such as tomato, barley, canola, maize, soybean, rye, wheat and maize, indicating that this is a conserved, universal stress defense mechanism in plants. This functional conservation makes theDREBgenes important targets for crop improvement for drought tolerance through genetic engineering. 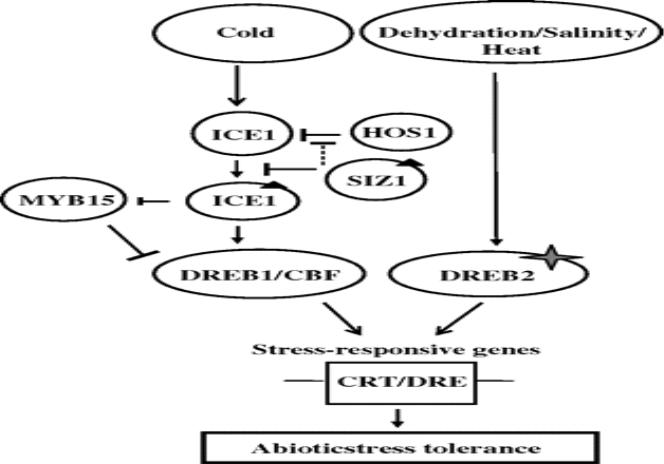 Salt and Drought stress signal transduction consists of some important pathways which are:

SOS pathway signals for the ionic aspect of salt stress. The expression and activity of the SOS1 which is an ion transporter is controlled by calcium responsive SOS3-SOS2 protein kinase complex. Osmotic stress first activates protein kinase including mitogen-activated kinase, which in turn mediate osmotic homeostasis and detoxification responses.

4) The CaMs-MKK3-MPK8 pathway for ROS homeostasis:

Rapid recognition and signal transduction of mechanical wounding through various signaling molecules, including calcium (Ca2+), protein phosphorylation, and reactive oxygen species (ROS), are necessary early events are responsible for the stress resistance in plants. It has been found that anArabidopsismitogen-activated protein kinase 8 (MPK8) connects protein phosphorylation, Ca2+, and ROS in the wound-signaling pathway. MPK8 is activated through mechanical wounding, and this activation requires direct binding of calmodulins (CaMs) in a Ca2+-dependent manner.

MPK8 is also phosphorylated and activated by a MAPKK MKK3 in the prototypic kinase cascade, and full activation of MPK8 needs presence of both the CaMs and MKK3 in plants. The MPK8 pathway negatively regulates ROS accumulation through controlling expression of theRboh Dgene. These findings depict that two major activation modes in eukaryotes, Ca2+/CaMs and the MAP kinase phosphorylation cascade, converge at MPK8 to monitor or maintain an essential part of ROS homeostasis. 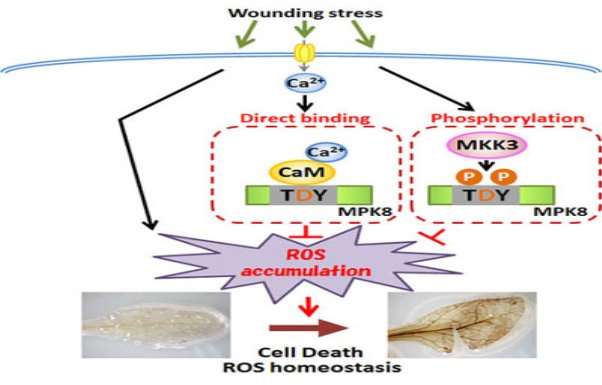 The strategy of homeostasis in genes has been one of the most promising approaches to enhance the growth, development and maturation of plants. Adverse effects caused due to the climate and temperature changes are reduced via homeostatic mechanisms of genes. Absolute pathways are being followed.

Plant homeostatic genes are becoming an integral part of Gene discovery and will maintain their place in Plant Physiology.