A long time ago, Malaysia is one the exporter of cocoa because they can produce abundance in tonnes of cocoa yield. This crop has become one of backbone of Malaysia economy during at the time (Malaysia Cocoa Board, 2013). Due to the rapid development of this industry, government was establish Malaysian Cocoa Board in 1989 that responsible to manage this crop very well by providing the skill and promotion to attract person interest on this crop. Unfortunately, as the time goes, cocoa yield production in Malaysia declining because most of private sector such estate and small sector change their preference from cocoa to oil palm and rubber due to high demanded by the customer and high price in the market. Another factor that could be possible that lead to declining of this crop is difficulty in term control of pest and disease. There are many kinds of pest and disease that always attacked this crop, as an example Cocoa pod borer (pest) and Black pod (disease) caused by Phytopthora spp. that commonly attack cocoa pods that cause loss of yield (McMahon, P. and Purwantara A., 2004).

I would like to give the specific focus on the Black pod disease caused by Phytopthora spp. because it cause domain disease caused damage on the cocoa pods then lead to declining the yield production (Guest D.,2007). 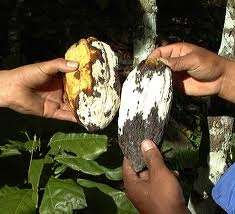 This is organism classified as oomycete (Erwin and Ribeiro, 1996) which means as “egg fungus” due to large form of oogania (female gamete) and they also commonly referred as “water-mold” because they more preferred to grow in high humidity (Kortekamp, A. 2005). They can reproduce from sexually or asexually. They are homothallic fungi where they can produce both female (oogonia) and male (antheridia) gametangia on single mycelium that allow them to reproduce sexually. Chlamydospores and sporangiospores which that produce zoospore (which is motile) are asexual reproduction of Phytopthora. Chalmydospores are survival structure for this pathogen and it can be retain longer in the soil than sporangiospores and zoospore. During the rainfall, this chalmydospores produce sporangiospore and zoospore, then the zoospore will flow with the droplet of rainfall, move and stick on new host during water uptake (Drenth, A. & Guest, D.I, 2004). The motile zoospore is capable to moves toward or away from chemical signal (chemotaxis) (Carlile, 1983).

This pathogen has ability to cause multiple diseases in same host. As an example, in cocoa, this pathogen can cause leaf blight, stem canker and black pod disease (Drenth, A. & Guest, D.I, 2004). It can be disperses by water and wind thus it allow the pathogen easy to spread. It also can be multiply by inoculum and rapidly reproduce. They are normally can be found in the wet tropics. All phytopthora species need high humidity for sporulation and germination of sporangiospores for start the infection. They more actively produced in wet area, high rainfall and heavy mist in the morning (Drenth, A. & Guest, D.I, 2004).

Symptoms that caused by this pathogen is necrosis or rotting on the cocoa pods. It attacks directly on the cocoa pods which can cause the loss of yield. It can attack on any stage of pods either small or mature cocoa pods. The initial symptoms can be identified by small, dark on the any parts of pods (International Cocoa Organization, 2013). If the symptoms getting worse it also will blacken the cocoa bean thus it cannot be consume or sold in market (McMahon, P. and Purwantara A., 2004). From the small necrotic lesion, it only need 8 days to enlarged and cover entire the pod thus we can conclude they are able to spread faster. It also can be infected by direct contact between infected pods with healthy pods Mora P., Wilbert; Cerda, R., 2009).

Phytophthora spp. can attack the flowers, pods, roots, stems, and leaves of cocoa plants (Thurston, 1984). Black pod caused by Phytophthora spp. My focus is for thePhytophtora palmivora. It is most destructive disease in cocoa cultivation, that cause huge loss in production of cocoa especially in Asia, Africa and Brazil where the total estimated loss is about 450,000 annually. The annual crop losses that estimated may range from 30 – 90% and it such a big loss to any organization or country that cultivated this type of crop (Bowers et al, 2001). There is different impact of this crop disease from country to country. Normally, the black pod disease can cause almost 10% of worldwide losses in all cocoa producing countries (Padwick, 1956) and it can be up to 90% for country that has high humidity and. Wetter such as Nigeria (Gregory and Maddison, 1956). This disease was reported heavily occur in Maluku at cocoa estates with humid environment (Soehardjan, 1992).

Control of the pathogen Phytophtora palmivora

There are some ways that can be used as controlling and minimize the spread of that disease. This disease can be managed using cultural, biological and chemical methods where the cultural method is using and adaptation of cultural practices but it may cause high cost, biological method is more friendly environment but not too efficient and chemical method is using of chemical compound that more effective but may pollute the environment and high toxicity. First is the use of resistant varieties that can resist to Phytophthora palmivora fungus and capable to prevent from black pod disease. Next, we should improve the nursery hygiene, so the young seedling would not effect by this pathogen and growth healthy. Phytosanitary in the planting area also should be considered factor that may prevent or reduce the crop infected by this pathogen where this method help to reducing the inoculum production and prepare unsuitable environment for them. The pruning should be done in order to improve air flow, removal of infected parts, reduce humidity and addition organic matter to increase soil fertility (Appsnet, 2008).

This pathogen can be controlled by chemicals compound include phosphonates, metalaxyl or copper hydroxide (Appsnet, 2008). There are varies kind of contact fungicides has been used as semi-systemic (metalaxyl and copper-1-oxide) and systemic (potassium phosphonate) fungicides (Opoku et al. 2007a) are applied to protect against Black Pod. The disadvantage of using chemical compound because it high cost, requires multiple applications throughout the season and application need the labour intensive (Ndoumbe-Nkeng et al. 2004).

The biological control of Black Pod by mycoparasites has been researched. Isolates Geniculosporium spp. were tested to determine whether they are able reduce the spread of P. megakarya (Tondje et al. 2006). As the result, there are reduction in the growth and lesion formation and reduced the amount of sporangia formed but this control still incapable to make a complete inhibition of infection. In order to control this pathogen, we need to integrate all the control method and not only depending only one method.

As the conclusion, we can conclude that Phytophthora palmivora is one of the major problems for cocoa plantation especially in Malaysia, because we have high rainfall that can reach about 2000mm and thus it is suit for their growth. We may face the high risk of abundance level attack of this pathogen. The characteristics of this pathogen allow them to survive in a long time, thus we should have better knowledge how to control and minimize this pathogen’s attack. Cocoa is one of crop that has high demand and high value exported. If we can control this kind of disease, we might be able to be the top producer of cocoa exporter. We can conclude that are so many way to control this disease and it is not impossible to adapt it and allow the cocoa act as major crop in Malaysia once again like before. Government already provide the proper facilities and incentives to those that interest to enter cocoa plantation, thus we should take this opportunity and help increase Malaysia economy.