Manic Depression, or more commonly known as Bipolar disorder, is a disorder that causes the patient affected to cycle through periods of depression and mania (NIMH n.d.). There are three general types of Bipolar Disorder and then a fourth category for those who do not fall within any of the previous categories. Bipolar I Disorder is defined by manic episodes that last at least 7 days and then a depressive episode lasting at least two weeks. Symptoms may be severe enough to seek immediate medical care. Bipolar II Disorder is defined by recurring depressive, and hypomanic episodes, but not to the extent of Bipolar I. Cyclothymic Disorder is defined by numerous periods of hypomania and depression that lasts longer than two years in adults, (for one year for children), but the symptoms exhibited do not fit the within the categories of a simple hypomanic episode or a simple depressive episode. The final category is Other Specified and Unspecified Bipolar and Related Disorders which is defined as bipolar tendencies, and symptoms, that do not meet the requirements within the previous three categories (NIMH n.d.). The true cause of Bipolar Disorder is unknown but scientists believe that it could be due to many environmental and genetic factors, as well as chemical imbalances within the brain- such as: GABA, serotonin, dopamine and norepinephrine (Bressert 2016). Some people experience “rapid cycling” of episodes while others experience a prolonged period of time between cycles of episodes. The exact cause behind the rapid cycling is unclear but researchers believe that it’s due to the consistent misfiring of receptors causing mayhem within the Central Nervous System. These neurotransmitters play a huge role in a person’s circadian rhythm, their emotional expression and regulation, their behavior and how well they respond to stress.

People who are experiencing a manic episode often engage in risky behaviors, (binge drinking or promiscuity), exhibit restlessness, and experience disruptions in their sleep patterns. Manic episodes can be triggered chemically within the brain, or they can be triggered by external factors such as: excessive stress, a change in diet or exercise, excessive caffeine intake, antidepressant medication, and certain other medications as well (Bressert 2016). Dopamine plays a role in the behaviors exhibited by patients in manic episodes. Dopamine acts on the D receptors within the brain and cause a person to be emotionally satisfied. When the receptors cannot receive dopamine due to a blockage, or antagonist, emotional satisfaction is dramatically lowered- causing patients to engage is risky behavior to try to fulfill their emotional needs. Rapid firing of norepinephrine receptors cause unpredictable, behavior due to the influence on the sympathetic nervous system. Some studies suggest that mania is due to certain circadian cues and insist that treatment for manic depression be scheduled around a person’s circadian rhythm (Roybal et al 2007). Serotonin plays a role in mania because patients have decreased binding affinity at 5-HT receptors during a manic episode (Yatham 2010). Serotonin and norepinephrine play a major role in mania but has also been linked to the depressive episodes as well.

Depressive episodes almost always follow manic episodes which is most likely the result of neurotransmitter reuptake and are the result of neurotransmitter imbalance within the brain. Many times, manic depression is often misdiagnosed as depression since depressive episodes are easier to diagnose than manic episodes, and therefore an antidepressant is prescribed. However, when a patient takes an antidepressant, such as a serotonin reuptake inhibitor, it doesn’t allow the active reuptake of serotonin which often leads to a manic episode because of the reduced binding (Yatham 2010). In contrast with manic episodes, brain serotonin 5-HT receptor binding is increased during bipolar depressive episodes. Treating manic depression is often very complex and combines a process of finding just the right regime of medication, as well as psychotherapy.

Although manic depression is a life-long illness that cannot be totally eradicated, many patients can lead a semi-normal, productive life if properly medicated. Typical treatments for bipolar disorder include: psychotherapy, mood stabilizers, antipsychotics, and some Selective Serotonin Reuptake Inhibitors (NIMH n.d.). In some cases, doctors will prescribe a medication to combat the depression, a medication to combat the mania, and then medication to combat any side effects caused by the other medications. Patients who exhibit a higher rate of serotonin 5-HT binding prior to starting medication had a higher chance of recurring episodes, even while taking medication, than did those who had a lower rate of serotonin 5-HT binding prior to medication (Parsey 2013). Lithium was a drug that works within the nervous system to strengthen the neural connections between cells to increase cell signaling therefore limiting the frequency and intensity of manic-depressive episodes. Lithium was anticipated to have success rates as high as 70%-80% but studies now indicate that Lithium really has a success rate of approximately 40% and comes with a plethora of side effects (Surgeon General Report for Mental Health). Modafinil is an alpha-adrenergic agonist and directly stimulated the receptors within the brain (modafinil.com n.d.). The reuptake of noradrenaline by the noradrenergic is decreased and increase excitatory glutamatergic transmission is increased. This decreases GABAergic transmission, resulting in the elimination of GABA receptor signaling which could combat symptoms of bipolar depression by limiting the abundance of GABA receptor misfiring (modafinil.com n.d.). Studies show a significant improvement in depressive symptoms in the patients who received the experimental drug (Modafinil) by the second week with maintained improvement throughout the remainder of the experiment (Frye 2007). The drug did not seem to affect mania however, because during the experimental period, there was no significant difference between the emergence of mania or in hospitalizations due to mania (one per group) (Frye 2007). 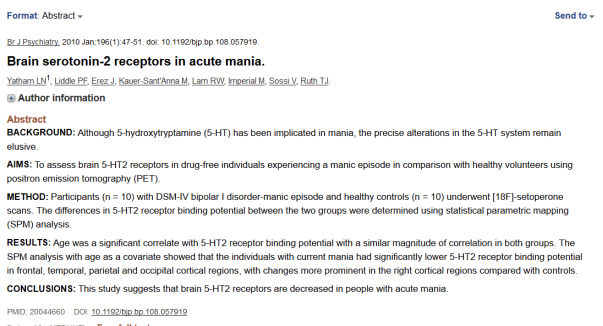 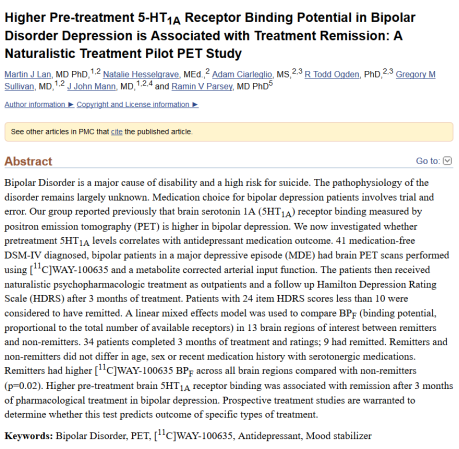 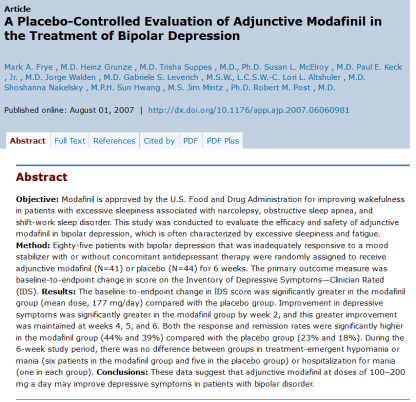