Air and water are always exerting pressure on every object or organism on Earth. Pressure is the force or weight exerted on an object per unit area in order to move it (Anderson, 2011). It is measured in bar or atmosphere (ata as an abbreviation) and changes depending on the place on Earth affecting organisms in different ways.

Despite that all three groups within this study belong to the class Mammalia, they all evolved in different ways adapting them to their environment. Being cetaceans the group who is entirely aquatic including whales, dolphins and porpoises (The Editors of Encyclopædia Britannica and G. Mead, 2014). Pinnipeds are the group of fin-footed mammals who spend most of their time in the water, however, coming to shore to rest or mate and it includes seals, sea lions and walrus (NOAA, 2014).

Therefore, it is aimed to analyse and compare the effects of pressure in humans, cetaceans and pinnipeds as well as comparing possible adaptions of each one.

At sea level, despite being imperceptible any object or being is subject to the pressure exerted by the air defined as one bar/ata.

When going underwater to the pressure exerted by the water the pressure of air at sea level has to be added. When the altitude drops every 10 meters below sea level the pressure increases by 1 bar/ata plus the one at the surface (PADI, 1996). Resulting in 2 bar/ata and so the pressure underwater can change as demonstrated in figure 1. 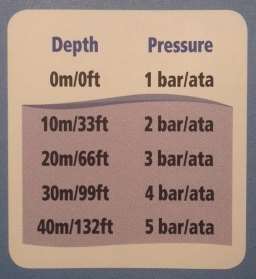 However, if the dive is made in a submarine to a depth of 120m/396 feet the crew inside will still be subject to 1 bar of the pressure of the air and the submarine would be the one subjected to the pressure of 24bar/ata from the water and air combined (Martin, 1997).

All mammals have a bidirectional respiratory system that isn’t prepared for living permanently underwater like fish are. In a respiratory system like this, gas exchanges occur by using the same airways. They start to inhale oxygen (O2) at the surface before diving and at some point, all must return to release carbon dioxide (CO2) and inhale again (Martin, 1997). The exchange itself occurs in the alveoli within the lungs, being the O2 transported to different parts of the body by the circulatory system and the CO2 expelled back through the nose or mouth in humans and pinnipeds and through the blowhole in cetaceans according to “WhaleFacts.org” and NOAA.

Cetaceans and pinnipeds being well adapted to a marine life they can hold longer underwater between dives comparing to humans who need scuba gear to dive deeper and for longer.

At first, could be assumed that in the case of cetaceans the reason for longer dive time or deeper dives is lung size. However, according to Whale and Dolphin Conservation (WDC) comparing whale average body and lung size to the one of a human, a whale’s lungs take 4% less space in their bodies than a human’s. Therefore, the key isn’t in the lungs but in the blood and haemoglobin concertation which in a whale’s is 30% higher than in a human. This helps the whale to storage more O2 in their bloodstream and muscle tissues instead of inside their lungs and this way avoid depth related complications. And the same can be verified in some deep diver pinnipeds (Kooyman and Ponganis, 1998).

The effects of pressure on body cavities

As these three groups belong the Class Mammalia they all share three main body cavities which are normally filled with air, ears, sinuses and lungs.

With air being a gas it changes volume along with pressure changes, so when pressure increases air get compressed and tends to decrease in volume.

On one hand in human’s this results in feeling an unconformable squeeze in the ear sinus and mask when using scuba gear. If these areas aren’t regularly equalised by adding air to them during a dive can end up in an eardrum rupture or a large headache (PADI, 1996).

On the other hand, in cetacean’s, evolutionary adaptations occurred within the hearing mechanism and sinus to be suited for water-borne sounds. Adaptations such as the fusion of the middle and inner ear capsules allowed cetaceans to better interpret sounds underwater however without being able to do the same to air-borne sounds (Au, Fay, and Popper, 2000).

Similarly, to human’s hearing pinnipeds ears more adapted to interpret air-borne sounds as most of the communication between individuals occurs above water. Although they do hear sufficiently well underwater (Riedman, 1990).

Finally, the lungs commonly to all three groups the main rule is not holding your breath completely while diving. During ascends as pressure decreases air volume increases and not realising it can cause lung rupture (PADI, 1996).

Among other major depth related consequences are barotrauma, decompression sickness or “the bends” and nitrogen narcosis.

While underwater the organism accumulates nitrogen and due to not being used, it must be expelled which normally happens with each exhalation. If the amount of excess nitrogen is too high when ascending the nitrogen leaving the tissue, forms large bubbles that can cause symptoms from dizziness, tingling and numbness to in severe cases unconsciousness and death.

It is commonly called by divers as the bends due to the nitrogen bubbles being trapped in the joint open area and not allowing them to bend their joints without pain.

With a wide range of noticeable signs and varying from mild to moderate it is difficult to diagnose DCS in humans. In the case of cetacean’s despite study made by Jepson et al. showing a lot of individuals with bubble lesions, it cannot be assumed that all cetacean’s mass stranding are related to severe cases of DCS when actually it was not possible to determine the origin of those bubbles.

This symptom is a result of a direct toxic effect of high nitrogen pressure in the body and it is similar to being under the effect of alcohol. May affect human divers at different depths but once it starts only gets worse has the depth increases and can be deadly as divers under this effect will commit dangerous actions while diving (Martin, 1997).

It can also be associated with cases of DCS as it usually happens before DCS.

Regardless of being completely aquatic, semi-aquatic or terrestrial, all three groups may suffer from the effects of pressure like DCS and nitrogen narcosis.

Being completely terrestrial humans are the most affected ones. Cetaceans are the most adapted group to life underwater, however, it is not safe to assume yet that this means that they are less affected or even immune to DCS nitrogen narcosis as the origin of the bubbles, that at first would be characteristic of DCS, was not determined by Jepson et al. studies.

Nonetheless it is possible to say both cetaceans and pinnipeds retrieve and storage oxygen a lot more efficiently than human being’s thus more efficiently avoiding DCS (Kooyman and Ponganis, 1998).