This chapter describes the sampling areas and methodological procedure used in all experiments undertaken in this study. Specific materials and methods are explained in the respective chapters.

Various experiments were carried out to determine the periodicity of the banding in polished and etched shell section. A total of 950 samples of A. granosa (shell length: 10 mm) were obtained from Kuala Juru (N 5° 20¹ 26.44º E 100° 24¹ 32º), one of the main productive mudflats for cockle harvesting in Peninsular Malaysia. At the landing site, the cockles were placed into rotator machine where water continuously sprayed onto the cockles in order to remove sediments and muds. Samples were then sorted to various size groups and cockles with shell length of about 10 mm were subjected to staining process (Figure 3.1). 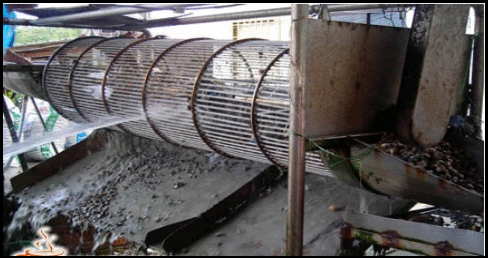 Alizarin red influenced both the behaviour and shell structure of A. granosa even though the red colour is not visible within the shell layer. During the immersion period in alizarin solution, the shells were remained closed causing a minimal disruption of the metabolic activities of the cockles. Therefore, the direction of growth lines deposition was changed in the shell structure. For this reason, all of the cockles were stained using Alizarin red combined in seawater at 30 ppm for 24 hours (Figure 3.2). Exposure of samples to alizarin red dye in the filtered seawater for 24 hours was sufficient to stain the shells (Riascos et al., 2007). At the study site, cockle shells resumed their growth on the stained again. Therefore, a coloured thick growth break of the shell with a V-shape cleft in periostracum region was readily observed. 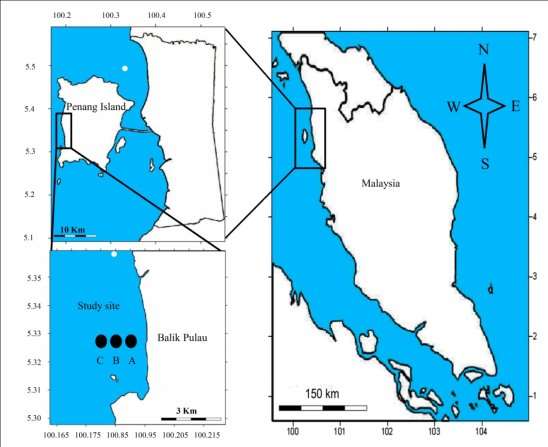 A study on the microgrowth line formation of A. granosa was conducted at three points (A, B and C) in intertidal and subtidal areas of Balik Pulau, west coast of Peninsular Malaysia from December 2011 to November 2012 (Figure 3.3).

Figure ‎3.4: Diagram showing the position of sites A, B and C in relative to the tidal change.

The cockles A. granosa were placed in a plastic mesh cage made of plastic net and PVC pipe frame. Cage was located at Site A, where the cockles were exposed on almost all low tides (Figure 3.5). The cage was specifically designed to have all four vertical sides lined with nylon net. The dimension of the cage was 2.0×2.0×1.2 in meters. Netting material attached to the frame was sufficiently small (0.5×0.5 cm) to prevent specimens from passing through it. The water level was lower than the height of the cage therefore upper surface of the cage was open for easy access to the cockles during sample collection.

The samples in sites B and C were placed in ten small plastic mesh baskets (mesh size: 0.5×0.5 cm). All containers were filled with mud from the surrounding environment and five baskets were placed in each site (Table 3.1). Dimension of the baskets were 0.7× 0.5× 0.35 m. The top Side of basket was covered with a net to protect against predators and the bottom was fixed with weights. The sites were clearly marked with poles (Figure 3.6).

Table ‎3.1: Description of the study area at site A, B and C in Balik Pulau, Pulau Pinang, west coast of Peninsular Malaysia.

After removing the soft tissue, thin radial sections were prepared from one valve of any specimen based on standard methods by Neves and Moyer (1988) (Figure 3.7A).

Valve of each specimen was marked by a pencil from the umbo to the ventral margin along the maximum growth line at a point from the shell posterior (Figure 3.7A). The valve was then fixed on the low speed saw with a diamond-impregnated blade (Buehler Ltd., Lake Bluff, IL) as inner valve surface was toward the diamond blade of a saw machine. Low speed was used to cut fragile materials that would otherwise fracture. The valve was oriented toward the saw machine to cut through the pencil mark at the ventral margin (Figure 3.7B). 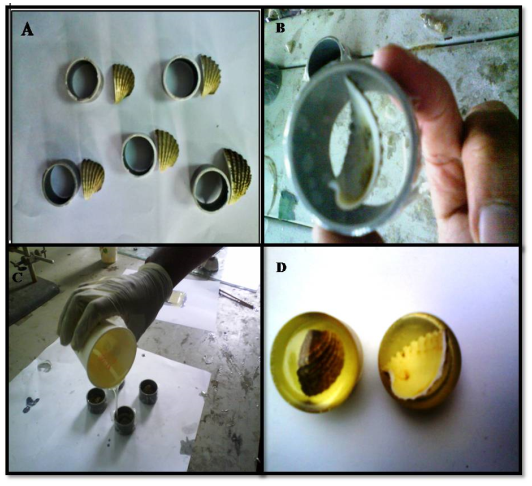 The shells sectioned were embedded in epoxy resin (combination of epoxy resin to epoxy hardener with the proportion of 2:1) at room temperature for a period of 24 hours. For this purpose, one side of PVC pipe was blocked with selefon tape. The valves were placed into PVC mold with the cut surface facing toward the bottom (Selefon Tabe side). Small volumes (50-75 ml) of mixed epoxy were added into PVC molds to a depth of around 3 cm. To obtain better results during polishing, the valve was pressed to push bubbles from between the cut surface and mold bottom (Figure 3.8).

Shell sections were then grounded by hand machine on five sequentially finer grits sizes: 240, 400, 600, 800, and 1200 (Buehler carborundum grits). Wet carborundum paper was used to get a smooth surface on the embedded cut surfaces of the valves. Most of the grinding was done with the 240, 400, 600 grit papers to remove epoxy from the cut surfaces of the valves (Figure 3.9A), the finer grits (800 and 1200) were used to reduce scratches from the coarser grit papers (Figure 3.9B).

Cut valve surfaces were polished on a semi automatic polishing machine (FORCIMAT – FORCIPOL 300-1V) in two steps. First, the pad on the plate of the device was soaked with tap water before fixing the plate on the polishing machine. Then, to obtain a shiny surface, aluminum oxide powder was added on the plate. The specimen was connected to the holder in polishing machine and was placed on the rotating plate. Polishing was continued for one hour thereafter the specimen was removed, rinsed in tap water, and dried at room temperature (Figure 3.10). 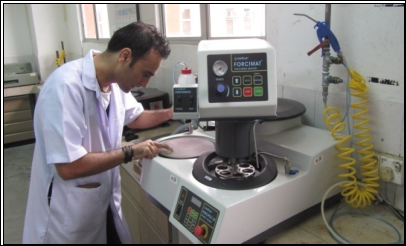 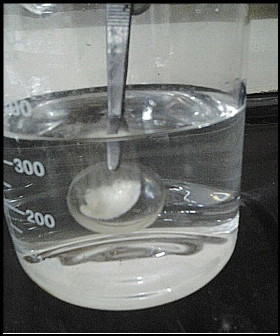 Etching was conducted with the aim of leaving the aragonite granules at the surface of valve section that distort the cross section image. Therefore, the polished cut surfaces of the cockles valves were etched by immersing the specimens in the dilute solution of Hydrochloric Acid (0.1% HCl) for one minute. The etched surface were then carefully rinsed with distilled water and dried in room temperature (Figure 3.11). 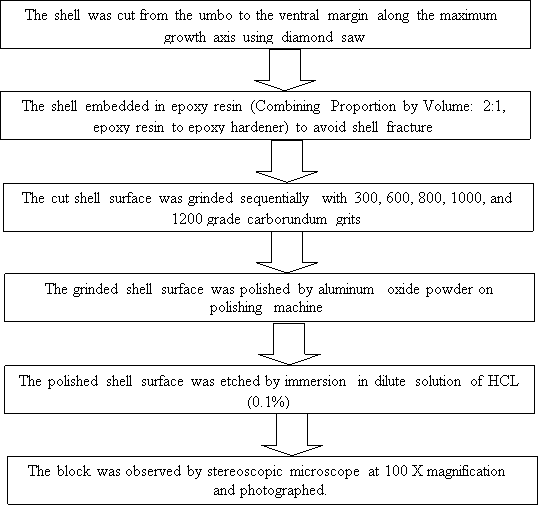 Growth in cockles can be affected by the interactions of various environmental parameters, although food supply is generally the main factor that affects the growth. On the other hand, food availability is influenced by several factors such as temperature, tidal change, salinity, rainfall, pH and water depth (Neves, 2004). Growth studies included laboratory research or field experiments which either manipulate conditions or observe natural changes of these environment factors. Therefore, to determine annual growth rate by means of the growth pattern, it is necessary to examine the daily environmental variations that effect on shell growth using a year-long pattern of daily growth increments.

Rainfall data was provided by the daily measurement taken by Pulau Pinang meteorological station at Bayan Lepas Regional Meteorological Office. The rainfall accumulation measurements were recorded to the nearest 0.1 millimetre, and the rainfall duration was recorded daily from December 2011 to November 2012.

Monthly tide tables of sampling site between December 2011 and November 2012 were obtained from Tide Tables Malaysia (2011-2012) published by National Hydrographica Centre, Royal Malaysia Navy. Total number of daily immersions and emersions were recorded for each site (A, B and C) based on the depth of each point.

The SPSS software (Statistical Programme for Social Scientist) version 20.0 was used to carry out statistical analysis of the results obtained in this study. All of the raw data from Microsoft Excel XP was transferred into SPSS software for further analysis.

X is the independent variable

Y is the dependent variable

b is the slope of the line

a is the intercept (the value ofywhenx= 0).

In the current study, relation between weights and lengths of cockles was carried out using a linear regression model.

A paired sample t-test was used to describe whether there was a significant difference between two sets of data values under two different conditions. The number of data in each data set group were similar arranged in pairs, in which there was a specific connection between each two set of data points

Multivariate analysis consists of a collection of methods that can be used when several measurements are made on each individual or object in one or more samples. The measurements were referred as variables and to the individuals or objects as units (research units, sampling units, or experimental units) or observations.

a (Alpha) is the constant term or intercept

b1 is the Slope (Beta coefficient) for X1

b2 is the slope (Beta coefficient) for X2

b3 is the Slope (Beta coefficient) for X3