The process of covalent attachment of the non-toxic, hydrophilic polymer chain of polyethylene glycol (PEG) to another molecule, a drug or therapeutic protein is called as Pegylation [1]. Pegylation was first carried out in 1970s by Davies and Abuchowski for the modification of catalase and albumin [2]. Since then, Pegylation is widely and tremendously developed. Nowadays, pegylated proteins make a huge business. As per 2005, sales for these products amounted for more than $5 billion [1]. In the industry of polymer based drug delivery polyethylglycol is the commonly used non-ionic, non-antigenic, non-immunogenic and FDA approved [3]. PEG is considered as a versatile polymer for the prodrug conjugation due to high aqueous solubility [2].

Pegylation shows various properties of biomedical significance including reduced immunogenicity and antigenicity, reduced toxicity, biocompatibility, good excretion kinetics, enhancing solubility and stability and decreasing rates of proteolysis and clearance [4]. In its common form, PEG is synthesized by the anionic polymerization of ethylene oxide which is introduced by a nucleophilic attack of a hydroxide ion on the epoxide ring [2]. Useful for polypeptide modification are the monofuctional modifications of PEG such as monomethoxy PEG on linear (mPEG) or branched (mPEG2) [5]. 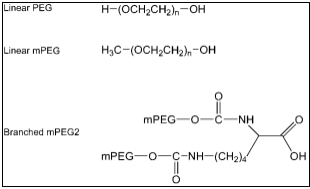 To pair PEG to a molecule such as polysaccharides, polypeptides, polynucleotides it is essential to trigger polyethylene glycol which has a functional group at one terminal or both the terminals. This functional group is selected based on the type of the reactive group on the molecule that will attach to the PEG. For glycoproteins to form formyl moieties hydroxyl groups can be oxidized with periodate. In case of proteins, typical amino acids include cysteine, lysine, threonine, serine, tyrosine, C-terminal carboxylic group and N-terminal amino group [6].

Cytokines are a family of many soluble glycoproteins and proteins which play a key role in the immune system. Cytokines include interferons (IFNs), interleukins (ILs), growth factors, the tumour necrosis factor (TNF), colony stimulating factor (CSFs) and chemotactic cytokines. These molecules are produced by leukocytes and also by other cell types such as epithelial cells, endothelial cells, fibroblasts [7].

For the half-life extension of many cytokines they are pegylated in which the cytokine is attached to the polyethylene glycol (PEG) chain. Pegylation protract the circulation of half-life of various proteins by covering proteolytic cleavage sites and by increasing their hydrodynamic radii. Pegylation can be attained enzymatically or chemically with biochemical and biophysical properties of the pegylated molecules depending on their size, structure, number and location of the PEG chains [7].

Recently, the desired effect of IFN has improved by replacing the standard interferon by conjugating it with polyethylene glycol (PEG). This is known as PEG IFN. This modern form of IFN significantly increases its half-life and results in more stable plasma concentrations of IFN [8]. Two PEG IFNs of conjugated PEG to IFN which vary in the quantity and quality have been produced.

Peginterferon is used in the treatment of chronic hepatitis C (HCV). This drug is administered either alone or in combination with the broad spectrum antiviral agent ribavirin. It is also used to treat chronic hepatitis B infection. This drug is majorly planned to mediate antiviral immune response [2]. Peginterferon alpha 2a has a molecular weight of 60,000Da. The PEG moiety is attached to a single site to the interferon moiety by a stable amide bond to lysine [9]. Binding of pegylated interferon to its effector can be inhibited if it is attached to multiple chains which may lead to steric hindrance [10].

The clinical study of this drug has shown that 180microgram of Peginterferon alpha 2a, when injected in a patient once a week with bridging fibrosis or hepatitis C-related cirrhosis was more effective than 3 million units of the standard IFN α-2a [2].

Peginterferon alpha 2a have a wide range of side effects. These include symptoms such as fever, chills, arthralgias, myalgias and headache. Other adverse effects include anxiety, emotional lability, and depression. Cardiovascular effects include hypotension, hypertension, oedema, myocardial infraction or stroke [11].

PEG-Intron has various side-effects such as redness, bruising, swelling, pain, itching, or irritation in a place where you injected Peginterferon alfa-2b. Some side effects can be serious such as rash, swelling of the face, throat, tongue, lips, eyes, hands, feet, ankles, or lower legs, fast heartbeat, etc.

Granulocyte-colony stimulating factor (G-CSF) is used extensively for several indications related to stem cell mobilization and neutropenia. Since, G-CSF has short half-life it requires repeated administration. Therefore, filgrastim a second generation recombinant human G-CSF which is produced in Escherichia coli has been introduced [13]. This new compound is conjugated with polyethylene glycol (INN filgrastim) which has a 12-fold extended half-life than the unconjugated drug. Pegylation of G-CSF masks proteolytic cleavage sites which help in the increase of G-CSF levels after a single injection for up to 14days and also reduces the risk of renal excretion [14]. The use of pegylated G-CSF is limited to neutropenia. This product is synthesized by conjugating a 20kD monomethoxyPEG to the N- terminal methionyl residue filgrastim. This product stays longer in vivo and has a half-life of 15 to 80 hours and is administered 6mg subcutaneously only once per chemotherapy cycle [13].

Interleukin 2 (IL-2) is a type of cytokine with a molecular wweight of approximatel 15,000Da and has therapeutic potential in treating infectious diseases and cancers. To overcome the short half-life of IL-2 and to increase its solubility, a monomethoxy polyethylene glycol (PEG) is chemically attached to the protein. This PEG-IL-2 conjugate is readily soluble in aqueous medium at neutral pH. PEG-IL-2 is extensively used in the treatment of Metastatic Renal Cell Carcinoma and Melanoma [15].

Tumour necrosis factor alpha is a proinflammatory cytokine which plays a vital role in mediating acute and chronic inflammation [16]. TNF-α has a short plasma half-life and is therefore readily cleared from blood. Because of this, high doses are required for significant anti-tumour effects. To overcome these problems, TNF-α is conjugated with polyethylene glycol (PEG) or polyvinyl pyrrolidone (PVP) at the N-terminus position. Modified PEG-TNF-α resulted in extended plasma half-life with better anti-tumour potency than the unmodified one [17].

PEG-TNF-α is efficacious in treating rheumatoid arthritis and Crohn’s disease at a low dose of 0.3mg/kg given every day. Using PEG-TNF-α pharmacokinetic studies in rats, mice, baboons, chimpanzees and cynomolgus monkey have been conducted [16].

The only water soluble polymer which is accepted widely in therapeutics for different drugs with market approval is polyethylene glycol (PEG). This is because of its less interaction with blood components and high biocompatibility. Over the last two decades Pegylation of various macromolecules has advanced and the appearance of pegylated drugs continue to speed up as the field of bio therapeutic expands. The important advantage of Pegylation is the extended body-residence which allows less frequent administration. This advantage of Pegylation has created blockbuster products such as Pegasys and PEG-Intron. The extensive use of Pegylation is possible because of the accessibility of PEGs with different molecular weights and activation forms. So we can conclude that a technology which was thought to be failing is now fulfilling its long recognized potential.