Pathogens are biological agents that cause or can cause infection when they get inside a living system. They are mainly micro-organisms with the ability to replicate at a very high rate when they gain access to the substrate in a living thing: plants and animals. Access to cells, tissues and organs of a living thing may alter the homeostasis that may lead to illness or fever. Such homoeostatic imbalance may be caused by one or more of their high proliferation rate, the chemical substances they produce- toxins, the cosmetic marks or discolouration of their invasion site or location of the mass they produce in the process of replications.

Description: A fungal infection of the feet and the spaces between toes. The affected area of skin may be scaly, inflamed and dry.

Infection: Contact with an infected skin or fluids, such as shared water in the swimming pool and infected clothes and socks.

Description: A mosquito-borne infectious disease caused by parasitic protozoans. The Plasmodium is the causative agen but Mosquito is the vector.

Infection: Bite of an infected mosquito. The Plasmodium is released from the glands of mosquitoes into the blood stream of humans. 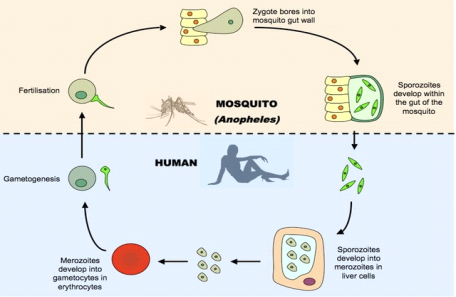 Description: A viral infection of the epithelial cells in the upper and lower respiratory tract of human.

Infection: Contact with body fluid of infected person, such as sweat, mucus , sputum and sneeze fluids. It also spread through the air from infected persons over a reasonably short distance.

There are three stages in the life cycle of Influenza virus. They are as follows:

The body of human is under a constant attack of foreign invaders of diseases, infections and toxins. Pathogens, the current point of study is one of the sources of infection. The human body is imbued with numerous safeguards, both internally and externally.

The human body has a strong protective barriers at the openings of the body to the external environment. The physical barriers that prevent invaders from entering the body systems provides the first line of defence.

Skin provides a a protective layer to the entire body and prevents external agents from gaining access to the body. Skin, being the largest organ of the body also provides a layer of defence to protect blood vessels, muscles and all internal organs. The skin is also a chemical covering of the the body. In the cases of skin tears or bruises, the blood vessels under the skin reacts to prevent external agents from entering the body. There is a mesh of blood clotting created by platelets and white blood vessels aggregate around the spot to form protection around the spot of bruise or cut.

There are few areas of the body anatomy that is not completely covered by the skin, such as nostrils, mouth, anus, private part in both men and women. Such areas are covered by ciliated squamous epithelium that produces sticky mucus that can trap invaders. After trapping foreign invaders, the epithelium of covering the entrance to the body system is de-squamated and rapidly replaced by another layer of squamous epithelium. For this reason, the epithelium of the lining the nose, anus, pudendum of humans have a high rate of replication. Recent research has proved that the cells of human nose grows forever and retain the unique ability to replicate until death. For this reason, cells from the nose has been used as stem cells to grow nervous tissues to treat paraplegia.

From insects to dusts, the most-outward lining of the nose and other parts of the Upper Respiratory Tracts traps, catch and destroy invaders. The product of this trapping is the phlegm that is produced after exposure to dusts and throat infections. The stomach acid, alkaline saliva and the colony of bacteria in the gastro-intestinal tract protects the body from foreign invaders.

All these means of protection from the invasion of the body system are called Non-specific (innate) immunity.

Other innate immunities are found in the activities of lysosomes that is found in tears that breaks down the bacteria in the eyes, commensals and harmless bacteria that cover every inch of the GIT and does not allow space for new invasion of bacteria and fever that deploys the mechanism of allowing the rise of the body temperature to be able to kill invading agents.

The immune system in infancy is reasonably complete at the time of birth. The ImmunoglobinG received by infants from mother at birth is a useful defence mechanism during the first days and weeks of birth. In the period of time after birth, the infant begins to develop his own long inventory of immunity. Breast milk provides protection against many common illnesses for passive protection from ImmunoglobinA. By this, breast milk gives protection from microbes. Breast milk is also believed to stimulate the infant in the development of his own immune system. The most significant influence of breast milk is the stimulation of B and T lymphocytic cells (T cells matures in the Thymus-in the neck region and B cells mature in the bone marrow) to produce immunity by exposure to microbes which colonise the gut during birth. The lymphocytes run within the lymphatic system which is a network of tubes that permeates tissues in the body. There are lymph nodes periodically in the conduit of pipes around the body.

The lymphatic system carry infection-fighting lymphocytes. When lymph nodes are inflamed, producing some discomfort, it is a good sign that the body is fighting some infection. This is because the lymphocytes proliferates and produce swellings very close to the site of infection.

An organ located very close to the Pancreas called spleen plays a major role in the fight iof infection and it is a part of the lymphatic system. The spleen contains lymphocytes that sieves the vascular system. Thus, the spleen has importance in fighting infections that have invaded the blood. There are also accessory lymphoid tissues that provides a strong barrier along the point of entry of such as the lungs and the gut.

T-cells are a group of lymphocytes. They are so named because theyy can be traced to the Thymus gland in the neck region. They are involved in the coordination of the immune system by secreting lymhokines.

Phagocyte are unicellular phagocytes that engulfs foreign organisms or particles. Phagocytes provide the contact between the specific and non-specific immunity.

Antibodies are protein compounds deployed by the immune system to designate and neutralise invaders like bacteria and viruses. Each antibody is specific to an antigen.

There are five classes of antibody – IgG, IgA, IgD, IgE and IgM.

Difference between natural and acquired immunity

Difference between active and passive immunity.