The enzyme Pantothenate Synthetase (also known as Pantoate–beta-alanine ligase, Pantoate-activating enzyme; abbreviated PS or Panc) is an important drug target in Mycobacterium tuberculosis. It is essential for the in vitro growth and survival of M. Tuberculosis. The panC gene encodes for pantothenate synthetase. PS catalyzes the ATP-dependent condensation of pantoate and beta-alanine to form pantothenate with AMP (adenosine monophosphate) and pyrophosphate as the common biproducts. Panthothenate (Vitamin B5) is further used in wall and membrane synthesis. Pantothenate is also a key precursor for the biosynthesis of coenzyme A (CoA) and acyl carrier protein (ACP), critical components of fatty acid synthesis. Both CoA and ACP play important roles in many cellular processes like energy metabolism and fatty acid metabolism (Jackowski, 1996). PS is absent in mammals,who obtain pantothenate from their diet using pantothenate permease(PanF) which is absent in M. tuberculosis. This suggests the potential for developing drugs that do not have cross-reactive toxicity to homologs in the host, and makes PanC an attractive drug target in M. Tuberculosis.

Pantothenate Synthetase (abbreviated PS or PanC; PDB ID:1iho; EC 6.3.2.1) is produced only plants and various micro-organisms including algae and is absent in mammals. Currently, it is best studied on bacteria.This enzyme belongs to the family of ligases.PS catalyzes the ATP-dependent condensation of pantoate and β-alanine to form pantothenate.Pantothenate Synthetase (also known as Pantoate–beta-alanine ligase, Pantoate-activating enzyme ) is a 282 amino acid/subunit protein in E. Coli.

PS belongs to the class of enzymes known as acid–amino-acid ligases (peptide synthases,forming carbon-nitrogen bonds as acid-D-amino-acid ligases).It consists of two identical subunits or chains namely chain A and chain B thereby forming a homodimer(von Delft et al. 2001),although earlier studies indicated that it could be a tetramer in solution (Miyatake et al., 1978). Each of this subunits contain two domains, N-terminal and C-terminal. PS belongs to cytidylyltransferase superfamily (Von Delft, 2001). This information is used to identify the location of the ATP and pantoate binding sites of the reaction intermediate. The N-terminal domain runs from residue 1 to 186, and forms a Rossmann fold. For simplicity, Numbering of the β-strands and α-helices goes from N-terminus to C-terminus (except helix α3′). 310 helices are numbered according to the preceding β-strands. Strands β1 to β4, β6, and β7 form a highly twisted central parallel β-sheet that is flanked by α-helices.This is where the active site might be located. Strand β5 is at the dimer interface and forms a two-stranded intersubunit β-sheet with the corresponding β5 from the other subunit.The active-site cavity is on the N-terminal domain which is partially covered by the C-terminal domain.

PS/PanC catalyses the reaction shown in the figure. 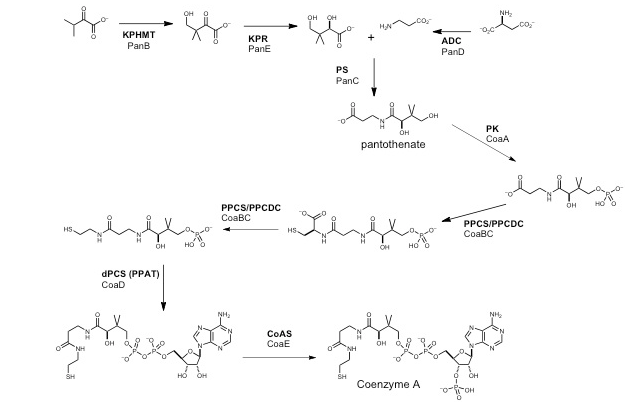 Figure1: Catalyzation of the condensation of pantoate with beta-alanine in an ATP-dependent reaction via a pantoyl-adenylate intermediate to form Pantothenate.

STRUCTURE AND MECHANISM OF ACTION:

The active site of Panc is clearly visible as it is located at the C-terminus of the central parallel β-sheet. It is present in a cleft between strands β2 and β6.The enzyme is depicted in Figure 2 (rendered from PyMOL). 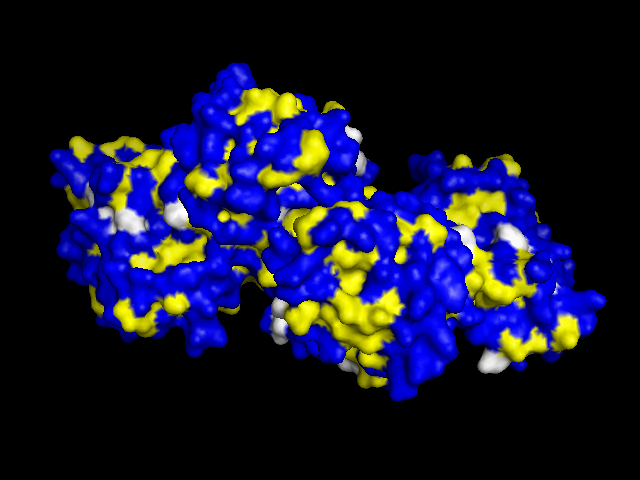 Figure2:The figures show the surface plot of PanC.The blue regions correspond to Hydrophobic aminoacidsand the yellow to hydrophilic amino acids. The groove that can be seen on the left side of the forms the active side of the protein.Another groove on the right-top forms the second active site.

Most of the hydrophobic regions are towards the pantoate and adenine portions of the co-crystallized reaction intermediate, pantoyl adenylate, which are located towards the extremes of the active region.The two regions explained in the above diagram are Region I (containing the backbone residue Val187 and the side chains Leu50 and Lys160) might be the binding region of the adenine moiety and region II (containing the side chains Val139, Val142 and Leu146) might be the binding region of the pantoate moiety (Fidele, 2014.). This is graphically explained in the diagram shown below. 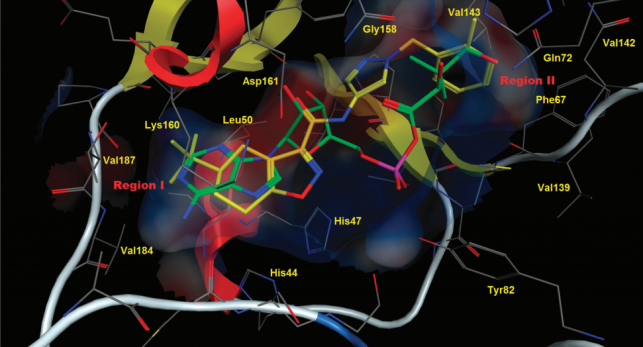 The enzyme-catalyzed reaction proceeds through two steps: the formation of pantoyl adenylate, followed by nucleophilic attack on the intermediate by β-alanine to form pantothenate and AMP. The existence of pantoyl adenylate has been confirmed by 31P NMR spectroscopy (Zhen and Blanchard, 2001).

Both ATP and pantoate cannot bind simultaneously in the active site. This might be due to the steric and charge repulsions between the α-phosphate group of ATP and the carboxyl group of pantoate.

The active site cavity is more flexible in chain B than A. It allows ATP to diffuse easily into the active site. The extensive binding interactions of ATP to the protein atoms make its binding thermodynamically more favorable than the binding of pantoate to the protein. This flexibility is absent in Chain A which favours panotate binding over ATP.

From these observations, it is likely that the reaction starts by the binding of the bulky ATP molecule in the active site of chain B. The smaller sized pantoate then binds on chain A and initiates a nucleophilic attack on the α-phosphate. The positively charged side chains around the β- and γ-phosphate groups of ATP draw the negative charges toward thereby allowing pyrophosphate to leave behind,thus facilitating the nucleophilic attack. His47 is likely to function as a general acid by donating a proton facilitating the pyrophosphate formation. Formation of a bond between pantoate and α-phosphate and breaking the bond between the α- and β-phosphate allows a direct hydrogen bond to form between the α-phosphate and the amide nitrogen of Met40. This favors the formation of the intermediate.

PanC is the potential target for anti-TB drugs. This has been mentioned in many instances from the beginning the reason being it PanC plays an important role in coenzyme A pathway. Ever since this was discovered, many assays were conducted by to find out the potential PanC inhibitor with varied potency against the enzyme target. There are numerous PanC inhibitors available. discovery of potent inhibitors of PanC have been focused on high throughput screening (HTS) techniques, synthetic modification of reaction intermediates, fragment-based methods and virtual screening (VS) techniques. It has been observed that the hydrophobic regions of the active region might contain tetrahydrobenzoisoxazole ring or the hydrophobic portions of the pyrazole-based inhibitors (Fidele, 2014). Most of the inhibitors known to the literature are likely to have a pyrazole ring. This is known from HTS techniques available and is also cited in various journals.