Psoriasis is an immune cell mediated skin disease. Both genetic and environmental factors contribute to the onset and severity of the disease. It occurs when the immune cells starts to move from dermis to the epidermis which causes the hyper proliferation of keratinocytes. The immune cells are usually dendritic and T cells stimulate the secretion of cytokines [tumor necrosis factor (TNF) α] causing inflammation whereas interleukin 23 proliferate keratinocytes.

Classic genome wide linkage analysis has identified nine locations (loci) on different chromosomes associated with psoriasis. They are called psoriasis susceptibility 1 through 9 (PSORS1 through PSORS9). Within those loci are genes. Many of those genes are on pathways that lead to inflammation. Certain variations (mutations) of those genes are commonly found in psoriasis. The major determinant is PSORS1, which probably accounts for 35–50% of its heritability. It controls genes that affect the immune system or encode proteins that are found in the skin in greater amounts in psoriasis. PSORS1 is located on chromosome 6 in the MHC, which controls important immune functions. [1]

This disease is caused by improper functioning of a lot of factors which include signal transducer and activator of transcription 3 (STAT3), adhesion family of selectins, Wnt5a, Endothelin-1, enzyme – alpha secretase, S100 proteins, p53, Serum Response Factor, HSP70 and Bcl-x. Recently, a study has been done and it shows that Phosphodiesterase 4 can be targeted for curing this disease. [2]

Phosphodiesterases (PDEs) is a cyclic nucleotide degrading enzyme with 11 known gene families i.e, PDE 1-11. These enzymes control the levels of cyclic adenosine monophosphate (cAMP) and cyclic guanosine monophosphate (cGMP). These are secondary messengers which involved in controlling different tissues in the body. PDE4 controls the cAMP pathway in inflammatory cells. Due to this reasons this enzyme has captured the interest of scientists for many years now as this pathway is affected in a lot of diseases including asthma, chronic obstructive pulmonary disease (COPD), inflammatory bowel disease, atopic dermatitis (AD), psoriasis and rheumatoid arthritis (RA). [3] The drugs currently being used are: Clobex, Dovonex, Elocon, Humira, Kenalog, Neoral, Remicade, Soriatane, Stelara, Taclonex and Tazorac.

Pharmacophore approaches have become one of the major tools in drug discovery after the past century’s development. It shows the different interactions in a molecule including hydrogen bonding, hydrophobic interactions, ionic bonding etc. A pharmacophore model is an ensemble of steric and electronic features that is necessary to ensure the optimal supramolecular interactions with a specific biological target and to trigger (or block) its biological response.

Pharmacophore for drugs of brain tumor, breast cancer, ovarian cancer, chronic myeloid leukemia and many other diseases have been designed using different computational tools and softwares.

Using proven pharmacophore methods, researchers can achieve surprising results from limited data. Pharmacophore modeling determines the spatial arrangement of chemical features that confer drug activity toward a target receptor. Search can be performed in large databases once a model is proposed. This will lead to a significant enhancement in the number of active analogs. This has paved a way to the discovery of new bioactive compounds. It is efficient in generating hits without using a receptor structure. It is helpful in rationalizing quantitative structure-activity relationships (QSAR).

The prevalence of this disease is 2-3% in the Western countries of which, 1.5% is from United Kingdom. 2.1% people are affected by this disease in America specially the northeast of which 35% are at moderate to severe stage. 1/3rd of the patients have the disease onset due to genetic factors. Methotrexate is the most commonly used oral agent used for treating Psorisis, but it can damage the bone marrow and liver Similarly, Cyclosporin is highly effective at treating the disease, it is damaging to the kidneys Drug designing is a complicated process and requires 10-12 years with high expenditure of money. Pharmacophore is a common skeleton possessed by different drug to treat a disease. Pharmacophore designing aims to further refine the drug efficacy by improving its specificity and reducing its side effects. So for better drugs with fewer side effects pharmacophores should be designed for saving time and money.

Extensive literature survey and problem identification is to be completed in the first month. Submission of research proposal and preparation of an extensive list of inhibitors of the target must be completed by the end of second month. A generalized pharmacophore that contains features that will be helpful in targeting the enzyme is to be prepared in third month. Completion of thesis write up will be done in the fourth month.

Cyclooxygenase (COX) enzymes catalyses the first march in the biogenesis of prostaglandins and are the pharmacological targets of non-steroidal anti-inflammatory drugs (NSAIDs). Saranyah K., Sukesh.K., and Dinesh Kumar K made a pharmacophore of known inhibitor S-58 screened with more than 100,000 ligands from Asinex Phase Database using Schrodinger. The best five ligands showed good orientation with the known inhibitor S-58 and further taken for the drug likeness analysis. [5]

Thangapandian Sundarapandian, John Shalini, Sakkiah Sugunadevi, Lee Keun Woo worked on the pharmacophore made of one HBA, two HBD and one HYP feature for the inhibitors of Zinc-dependent histone deacetylase 8. The inhibition of this enzyme has been reported to be a novel strategy in cancer treatment. [6]

Asma Abro, Saima Kulsoom and Naveeda Riaz created a pharmacophore against ovarian cancer of microtubule-stabilizing anti-mitotic agents (MSAAs). The pharmacophore contains one HBD, two HBAs and one hydrophobic feature. A large number of classes of MSAAs is taken into account and hence a unique pharmacophore than all of the previous studies was generated. [11]

A study done by Amadeu Gavalda and Richard S Roberts shows that the inhibitors of Phosphodiesterase 4 are Roflumilast, Apremilast, Revamilast, Oglemilast, Tetomilast, MEM1414, Ronomilast, RPL554 and AN2728. [12] 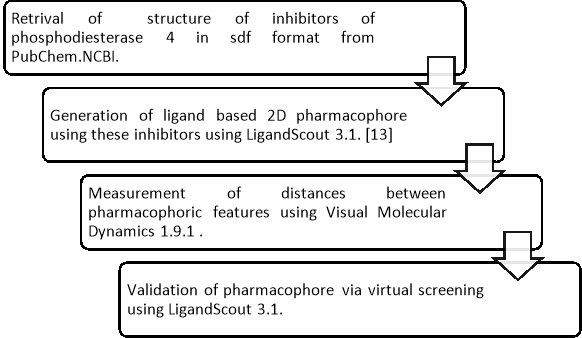 This research will be conducted in the Biotechnology Lab at Kinnaird College for Women, Lahore.