Nutrient Deficiency Effects on the Growth of Raphanus Sativus

Macronutrients are an essential to all living plants, but the focus of our study is quantities that effect plants. How significant certain macronutrients relate to others in growth and total health of a living plant? Our focus of the study supports the ideal that potassium, phosphorus, and nitrogen play major roles in plant development and when deficient show severely stunted growth. While magnesium and phosphorous are needed in smaller quantities given their mobile nature. These results imply the importance of nutrient rich soils.

Macronutrients play a vital role in many functions of plant growth and development. Macronutrients such as potassium, magnesium, phosphorus and nitrogen are elements that are in concentrations of one gram per kilogram or greater. When deficient of the certain macronutrients, abnormal in appearance and growth those nutrients then become called essential elements. Potassium is used to activate enzymes, ion and water balance, and stomatal opening; Nitrogen is used to build nucleic acids and proteins; magnesium is needed by many different types of enzymes, helps stabilize ribosomes and chlorophyll; and phosphorous is used for ATP, phospholipids and building nucleic acids (Sadava, et al. 2009).

We prepared five treatments consisting of solutions of phosphorus, magnesium, potassium, nitrogen, and complete nutrient solution. Each treatment was used in a total of two pots each with two Raphanus sativus in each, which totals to twenty Raphanus sativus were used for this experiment as a whole. Each of the treatments other the complete solution were absent of the four stated macronutrients.

Plants were put into bins according to the macronutrient they were going to be deficient of or lack of. In the bins a wick was placed on the bottom of each plant pot to prevent withering from lack of water during days not treated with solution. Initial observations were recorded and then plants were recorded qualitative and quantitatively on a weekly schedule. Plants were watered every other day with the represented nutrient deficient solution labeled on each pot for four weeks.

At the end of the fourth week of treatments and growth period, final measurements were taken from the plants. The plants were removed from the sand and perlite and the roots were then separated from shoots and weighed individually. The roots were cut away from the wick and clean slowly not to prevent root loss and weighed. This was done the same way for the shoots as well, to prevent inaccurate data. 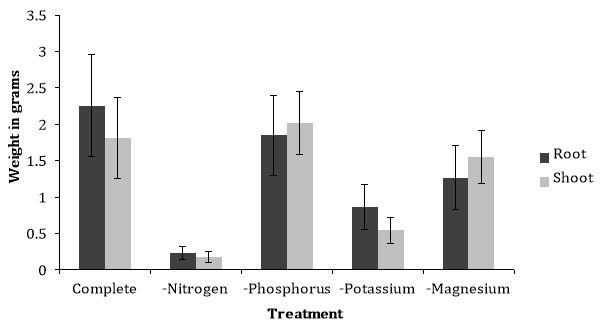 In the shoots of the Raphanus sativus the PT exhibited the most growth compared to all other treatments being 10.3% greater in mass then CMT. The smallest growth was NT being 91.1% smaller then PT. The next smallest growth by mass yield was KT which was 72.9% smaller then PT and was 67.4% greater than NT. The next highest growth was MgT which was 22.8% less than PT and only 14.3% less than CMT. Error bars for CMT, PT, and MgT all overlap while PT and NT error bars do not. 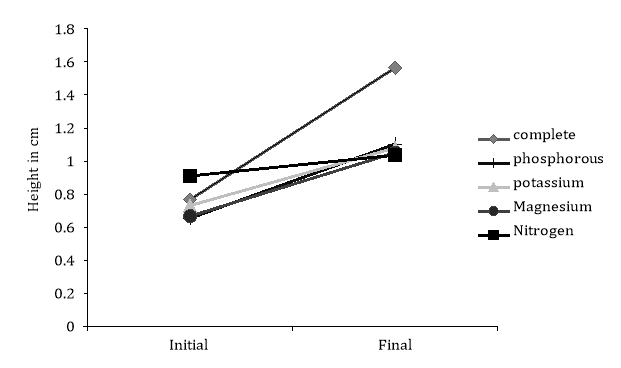 Figure 2. The average mass of Raphanus sativus shoots and roots in different macronutrient deficient solutions (minus nitrogen, minus phosphorous, minus potassium, and minus magnesium) along with a control (complete nutrient solution) within a 4-week period. Error bars show calculated standard error.

Qualitative data were recorded on Table 1. Observations related to size, color, and appearance was noted based on the individual treatment. Most treatments did not experience and abnormalities till the 3rd week compared to the other weeks.

Table 1. Observations of Raphanus sativus plants watered in different macronutrient deficient solutions (minus nitrogen, minus phosphorous, minus potassium, and minus magnesium) along with a control (complete solution) within a 4-week period.

Our hypothesis was supported when it comes to MgT was very much wrong and inaccurate with the data that is present. Our prediction of NT did experience what we predicted, in the sense of total mass of the Raphanus sativus (Figure 1). But the plant did not have a very high ratio to growth compared to the other treatments in this experiment. Our results show that nitrogen is one of the essential macronutrients with respect to growth and development. PT experienced a greater growth than expected even with the high range of standard error, which would implicate that it was not an essential element or macronutrient, but with it relative standard error conclusions cannot be made with certain data when compared to CMT . KT seem to experience stunted growth, this shows that it too is an essential element to plant growth (Figure 1). MgT did not experience stunted growth when compared to KT and CMT but had deformities in the leaf organs.

Phosphorus is a key element in adenosine triphosphate an energy carrier. Phosphorus is used in the bilayer plasma membrane and is required for some proteins when made into phospholipids. There is a wide range of uses for phosphorus which makes it logical to support it as an essential element for plant growth.

In other research studies have shown that plants who are deficient in nitrogen, experience reduction in chlorophyll concentrations, size and leaf matter (Zhao, et al. 2005). Our data results support this as well which infer that nitrogen is a key to essential proteins related in development of the whole plant specially photosynthesis. If the plant goes without nitrogen it may not ever reach sexual maturity which would decrease its overall fitness making nitrogen important to all plant life.

Growth in MgT may have not been severely stunted because magnesium may have already been in sufficient amounts with in the endosperm of the seed. Given just the right amount of elements it need to make new leaves allowing for growth to occur (Silva et al. 2000). This is supported by no fallen leaves in the MgT treatment and rather no real organ change at all. Growth in the KT treatment on the other must have had almost no potassium provide earlier in the endosperm of the seed based off the data (Figure 1). This is supported by the fact that there were many dead leaves of the older leaves in our relative group of treatments compared to CMT.

Our study shows the importance of macronutrients in plants in the environment ecosystems and in agricultural ecosystems. Deforestation, erosion, and harvesting can lead to these essentials elements to be lost. Soil that is deficient in either phosphorous, nitrogen, and potassium and lead to decrease fitness in the number of sexually mature plants leading to death.